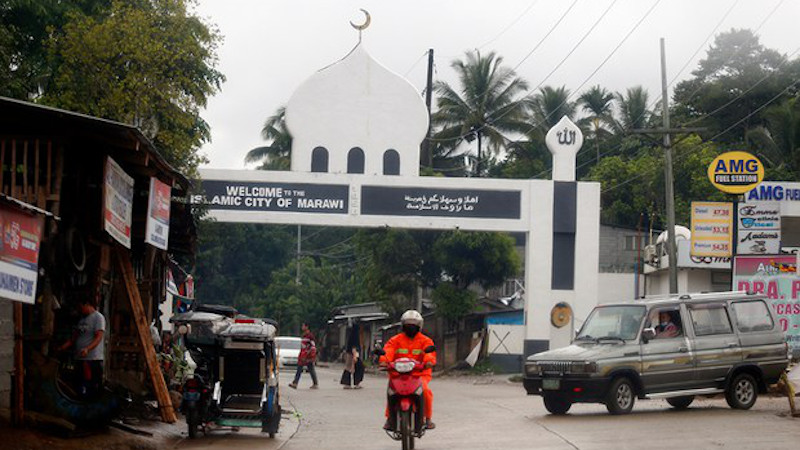 By J.C. Gotinga and Jeoffrey Maitem

Four years after pro-Islamic State militants seized Marawi city in the southern Philippines, extremists are exploiting residents’ frustration over ongoing delays in its rehabilitation and loose ends in a transition to an autonomous regional government, analysts said Friday.

As of January 2021, more than 17,000 families from the war-damaged city center remained displaced, according to data from the United Nations. Hundreds of foreign and Filipino militants raided the city and took it over on May 23, 2017, and were driven out by government troops five months later, after a battle that destroyed much of Marawi.

Disappointment in the central government-run effort to reconstruct Marawi is rife among the city’s native Maranao people.

“There have been people whom we have interviewed among the returnees who actually cited the reasons behind their frustration and disappointment had to do with the lack of attention, developmental and otherwise, on the city of Marawi and Lanao del Sur that continues up to the moment,” said Francisco Lara, senior adviser for the Philippine office of International Alert, a London-based watchdog group that specializes in conflict prevention and resolution.

Interviews by International Alert with two militants who had surrendered to authorities revealed that groups were “using the delay in the reconstruction in Marawi as a rallying point to try and stoke the frustrations of people,” Lara said during an online forum on Friday.

Daulah Islamiyah, the Filipino branch of the Islamic State extremist group, has been recruiting in Butig and Munai, two impoverished remote towns in the region around Marawi, Lara said.

“We have validated reports of active recruitment amid the government’s reintegration program,” Lara said.

Since 2019, armed groups opposed to the peace deal continue their fight for a separate state while others have declared their allegiance to the Islamic State (IS) extremist group.

“Questions about the honest-to-goodness implementation of the peace agreement will have an impact on the sparks of conflict in our communities,” said Anna Tarhata Basman, a member of the Bangsamoro Parliament.

As for Marawi, Basman said uncertainty felt by many residents has led to some acts of violence.

“Some individual settlers are more attracted to putting matters into their own hands when there is a lack of confidence that formal processes are going to be responsive and effective in dealing with their grievances,” Basman said during Friday’s forum.

He noted that the IS took advantage of a small militant group led by the Maute brothers who participated in the 2017 siege – adding that a similar attack could happen again.

“That is our fear. No one can really say what the youth are thinking,” Lininding told BenarNews. “These militant groups can tap into that frustration. And as long as injustices exist, there will be repercussions.”

In 2021, remnants of the Mautes and other militant groups espouse the IS ideology and display its black flag in the Mindanao region.

He noted that the COVID-19 pandemic had added to the pressure as many young Muslims do not have jobs and their movements are restricted.

Manila has so far spent the equivalent of about U.S. $350 million to rebuild Marawi, mostly for the construction of showpiece public facilities such as public markets, government halls, schools, a museum and a central park.

As work has dragged on, authorities have kept areas of the city mostly off limits to residents anxious to return and start their own reconstruction projects.

Although there has been some semblance of normality in Marawi, thousands of residents remain displaced.

On Friday, Hannah Sarip, a development worker, said the only way to catch glimpses of her childhood home pockmarked by war, was to climb onto an abandoned building in Marawi because the area remains cordoned off.

A BenarNews reporter who traveled to Marawi on Friday found shops reopened, while military and police checkpoints had been placed at entry and exit points of the city. A large portion of the downtown, the main battleground, remained closed to civilians.

Sarip, her husband and two young children were among those who fled Marawi in 2017.

“There were plenty of memories in our ancestral house. And I am looking to one day rebuild our home when they allow us back in,” she told BenarNews.

Sarip’s family lives with relatives across the river from the main battle area. As the government remains preoccupied with the COVID-19 pandemic, she said she does not expect to be able to return anytime soon.

A bill proposing compensation for Marawi is pending with the Philippine Congress.

Last October, as the Philippines marked the third anniversary of the end of the Marawi siege, President Rodrigo Duterte promised that Marawi would return.

“Do not worry. And we will continue to spend until such a time that Marawi is rebuilt to its former glory,” Duterte said at the time. “It might take some time before we can really reach the ideal place that you’d call home.”