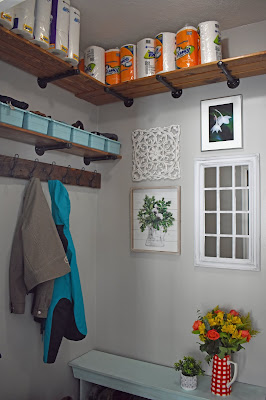 Good-ness. Fourteen farmhouse love episodes? When will this end? Well, by my count I still have at least seven more spaces to paint and cute-ify, and I do still have that day job, so it could take awhile.

Welcome to our mud room. This room is a work horse in our house, and it does have mud in it on occasion. This is real life right here. Except for that pitcher of flowers. That is totally staged. It would get knocked over in a heart beat if I for real left it in this room. 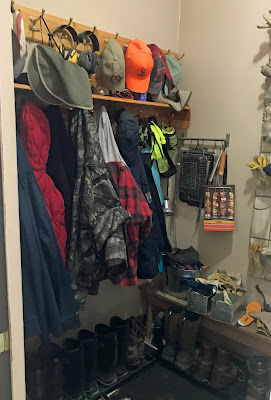 The mud room looked like this when we started on this project in early November. It was pretty cluttered, and I'm not going to lie, it's still cluttered, but there are things in this room that we need. 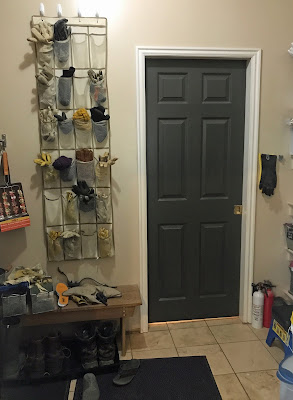 The shoe organizer for the gloves and winter hats worked well for us. A little unsightly, perhaps. I would have hung it on the back of a door, but both of the doors to this room are pocket doors, so that wouldn't work. 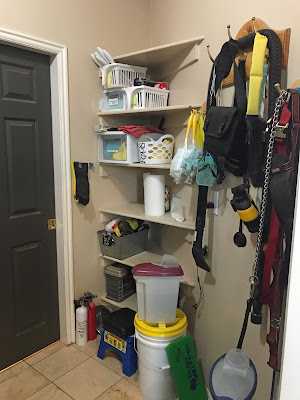 It was at this point that I realized I needed to take before pictures. I had already started removing everything off the shelves, so you aren't even getting the full picture of how much crap I was able to cram onto these shelves. I will say that there is not less stuff on these shelves in the after picture.
And that's it. I took three before pictures. Then I took everything out of the room, washed the ceiling and walls, and started painting.
The rest of the room came together pretty slowly. 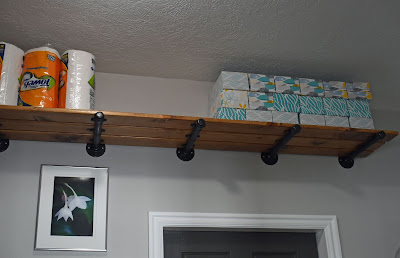 We took it one storage solution at a time, starting with the upper shelves to store all of our paper products. 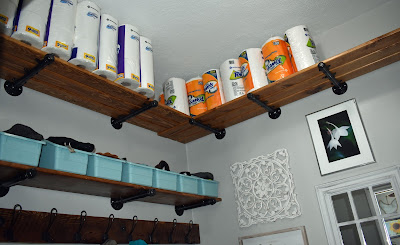 Now we can really stock up so we're ready for the zombie apocalypse. 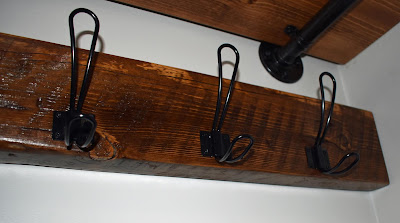 After the upper shelves went up, we made this coat hook board from another gnarly piece of wood that Peanut Head drug in from the field. He's really good at that.
I found the cee-ute farmhouse hooks on Amazon. You can find them here (affiliate link). I like them so much that I bought another pack of ten after I bought these. I don't even know what I'm going to use them for yet, but I have them. 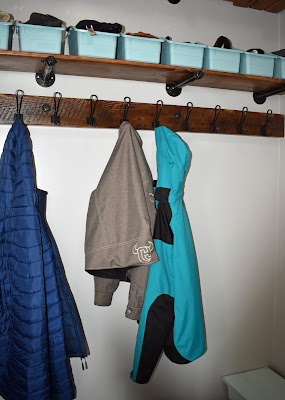 I feel like I should tell you that we never have only three coats in here. I moved all of them to the kitchen table while I took these staged photos. 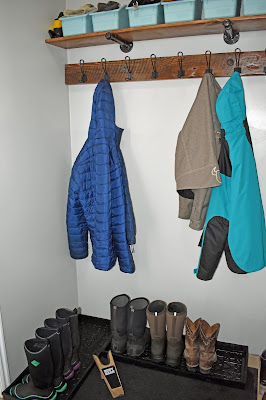 We have more boots than you see here too, but Peanut Head and Zoe were wearing a pair each. I did take the boot trays outside, in our 20 degree weather, so I could clean all the horse poop off them. I didn't want to gross you out, but you should know that they regularly have horse poop on them because these boots were made for walking around horse poopy areas. Our backyard. And sometimes our porch. 😱 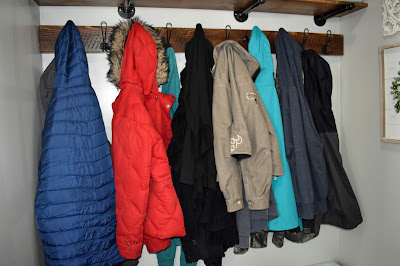 Here's a real life picture of our coats, although there are two coats missing that Zoe and Peanut Head are wearing. Remember, it was 20 degrees when I took this picture. This morning it was zero degrees. Usually there are so many coats hanging up that you can't even see the coat hooks. And that's sad because they're so cute. 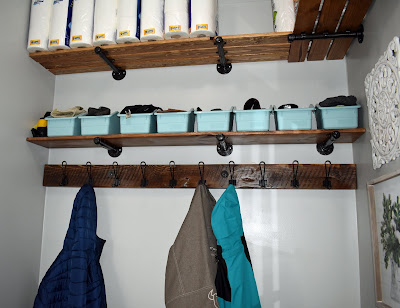 After the coat hook board went up, Peanut Head put the shelf above it. These cute bins came from IKEA, and they hold our gloves and winter hats. Each family member gets exactly two bins. If you want them, don't buy them from Amazon. I saw them for $25 there, and IKEA sells them for $2.99 each. The internet is cray-cray.
The bins are working out well because we can easily reach up and bring a bin down to rifle through it. It's a stretch for some of us, and sometimes I trip over boots that certain family members suck at putting away properly. I get cranky about that. 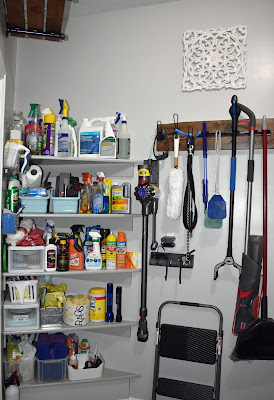 I know this is cluttered, but I need all of it. All of it. Believe me, I did consolidate and simplify. Remember though, real life.
The cleaning implement board (I don't know what else to call it) was made from another piece of gnarly trash wood. We added some hooks and a mop/broom hook bar (??) we found at The Container Store. If you haven't been to The Container Store, I'm telling you right now that you haven't lived. 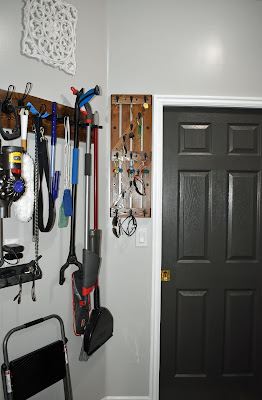 We used to have two small key hook strips over the light switch with exactly eight hooks. I asked Peanut Head to make me a barn door looking key hook rack and he went a little Tim the Tool Man Taylor on it.

Now we have fifteen hooks so we can even hang our sunglasses up. We have a lot of keys, I know. Four of those carabiners have exactly the same keys on them too. We have several outbuildings with way too many doors because every structure was built onto trailer park style. You think I'm kidding, but I'm not.
The only thing I'm going to say about that, besides what I've already said, obviously, is that plywood is not siding. Seriously.
Anyway, we have four sets of the same keys because we tend to misplace keys. At one point we had a full set laying out in our pasture for an entire winter. Keys fall out of coat pockets, get left in coat pockets, fall off the ATV, you name it, it's happened. Although to my knowledge we haven't had an animal eat any keys yet.
And that's it for the mud room. I'm very happy with the way it turned out, even if it took three months to finish. To be honest, that's the only way we could have pulled it off because we were using it for all but maybe two days while the painting was done. While the coats and boots were out, and mostly on my kitchen table, I was twitchy. 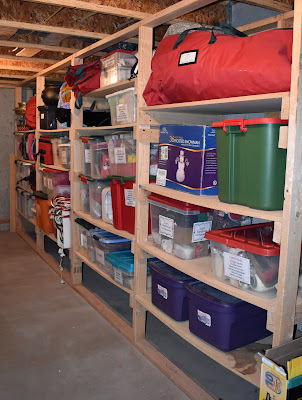 We also tackled our basement storage room, but this one came together much faster. We worked on it over two or three days on our Christmas vacation. This project provided me with so much relief. It was a disorganized mess and it was so depressing to try to find anything. I didn't take any before pictures of the disorganization though, so you'll just have to imagine it. 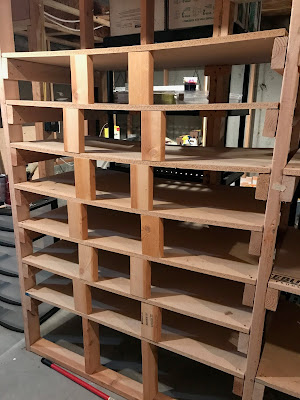 This is actually a before picture, but it was taken after I pulled everything off the shelves. This particular section of shelves was used for canning jars. I can say that with confidence because the former owners left some canning jars here. We do not have that many canning jars, so something needed to be done to be able to use this space. 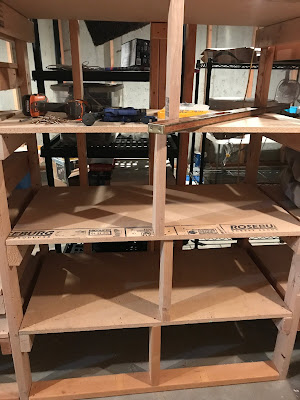 Enter Peanut Head's and a crow bar, a level, and some other assorted tools. I'm just going to put this out there. There was a fair amount of cussing.
The shelves are actually sturdy now though, and everything is level. Always a bonus.
When he was finished he asked me if I was going to paint them. I snorted at him in response, and he walked away with his level and his hammer whilst shaking his head. 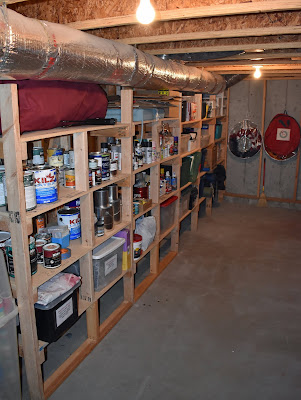 Now all my paint fits, and dare I say it, I have room to grow. Don't tell Peanut Head that I said that last little bit. 😉 He's a little grouchy about my paint habit. 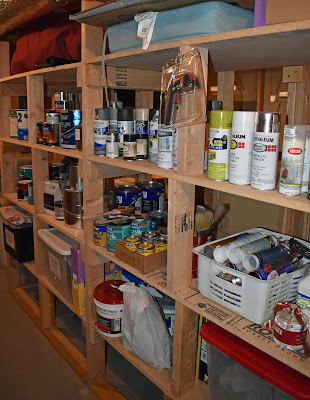 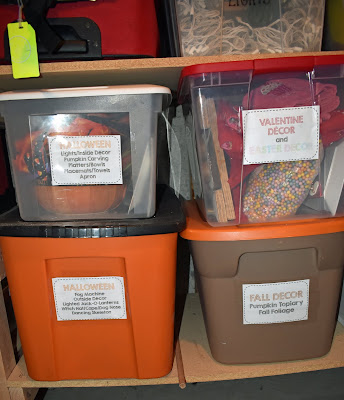 I easily spent a day just making labels for all our bins and organizing their contents. We started this project while putting away Christmas, so I used the opportunity to purge some things. 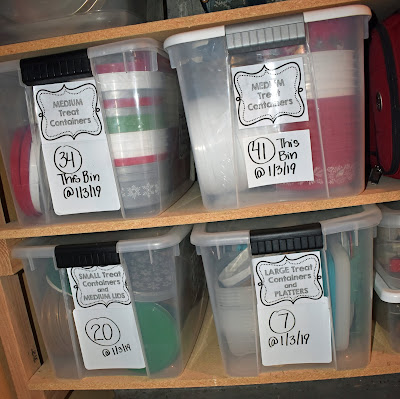 This section makes me so happy. We had all this stuff for our annual holiday bake-a-palooza scattered about, and we didn't know what we had until we rounded everything up and counted them. This had to be done every year. No more. We have a running inventory now. 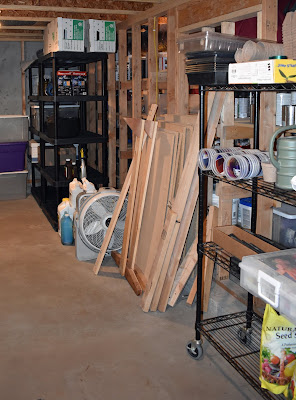 This is the other side of the storage room, and we have dedicated this to Peanut Head's garden prep and seedling birthing area. Indoor nursery? Call it what you want, it's where our garden takes root, literally.
All that wood there is the leftover from the dismantling of the shelves on the other side. Maybe Peanut Head will build more shelves on this side? Maybe we'll build another exterior structure with plywood siding? We don't know yet. 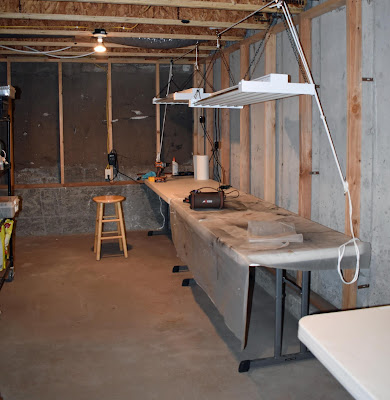 Peanut Head is giddy about adding a second grow light. Well, as giddy as Peanut Head gets. He has plans to run some plumbing over here so he can water his babies without making umpteen trips up and down the stairs with his watering can. 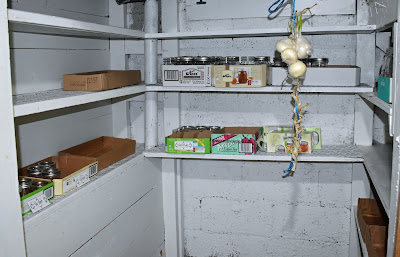 This cute little section is right under the stairs, and I'm using it for my empty canning jars. We only have four onions left from our garden last summer, so we've decided that next year we need to grow more. We also have a 5-gallon bucket of potatoes on the floor there. 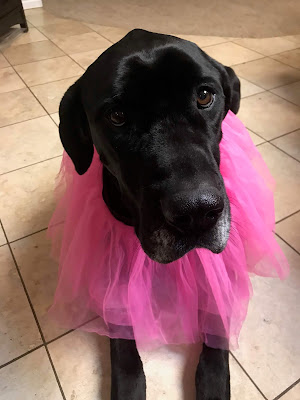 When our neighbor delivered them to us, Banebridge retrieved a fallen potato from the ground and ate it whole, dirt and all. He has a voracious appetite. 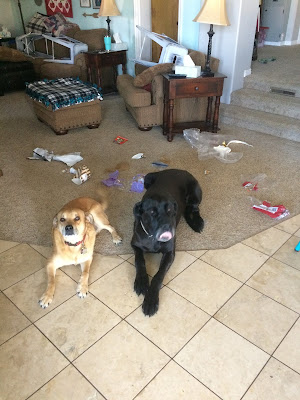 Baney and Gunny Man have been naughty dogs. Since Baney is vertically inclined, he has the ability to scan the countertops at eye level and easily dip his head into our 2-1/2 foot tall garbage can to retrieve yummies. In this picture you can see the detritus from an entire loaf of bread, a bag of hamburger buns, cold medicine (which thankfully he was not able to penetrate), a half gallon ice cream carton (empty) and who knows what else. Baney was not picky about discarding wrappers, and I know this because I poop scooped the yard after the binge session.
I'm giving most of the blame to Baney because I know that Gunny was merely present. Since I witness the dog food consumption daily, I know that Gunny didn't have a chance. Baney inhales his food so fast that he has this little snorty routine where he has to clear the crumb dust from his nasal passages after hoovering his meal. Then he looks over longingly at Gunny Man delicately nibbling at his food. After that, he saunters into the mud room to make sure we didn't spill any delectable morsels. I will say that Gunny has never eaten so well since Bane has joined the household. He knows if he doesn't eat it now, it will not be there to eat later.
You may have also noticed the stools on the couch and chair? That's our attempt at keeping the boys from lounging on the furniture. My favorite is to see a cat curled up between the rungs of the stool legs. It's like the cat is mocking the dogs. Cats are the best.
That's my DIY update for this month (or two). Next up we are putting the finishing touches on our home gym, and after that I get to tackle our master bedroom. I'm super excited about the bedroom. I've been buying things. Until next time . . .
controllingmychaos.com diy family farmette
Latest Posts