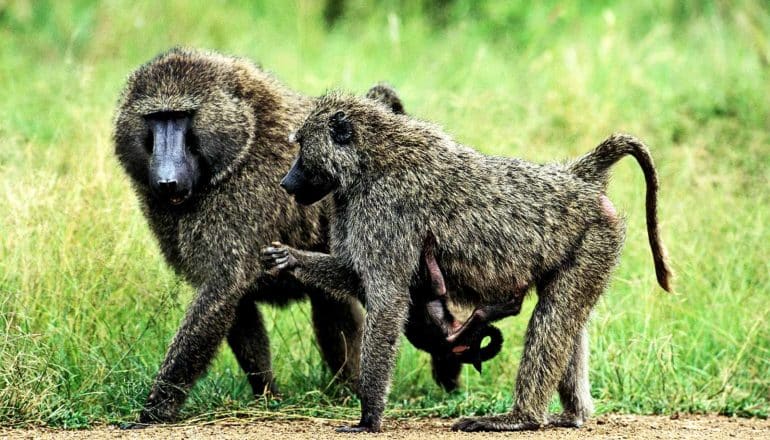 Male baboons that climb to the top of the social ladder age more quickly than males with lower social standing, according to the new study.

If a male’s social status drops, so does his estimated rate of aging, the researchers report.

The researchers used blood samples from 245 wild baboons in the Amboseli ecosystem in Kenya to analyze chemical modifications to DNA known as DNA methylation marks.

“These marks change with age in a clock-like fashion,” says Jenny Tung, associate professor of evolutionary anthropology and biology at Duke University. “However, environmental stressors can make the clock tick faster.”

This would make an individual appear older than they really are, and, research in humans suggests, can put them at a higher risk of aging-related disease.

The study appears in the journal eLife.

Since this cohort of baboons is one of the most intensively studied wild mammal populations in the world, the researchers already knew not only each baboon’s age, but also the environment in which they grew up, their exposure to early life adversity, and a great deal about their adult environment, especially the aspects that predict how long they live and how many offspring they leave behind.

“We used DNA methylation to compare the baboons known ages to their ‘biological ages,'” says Jordan Anderson, a graduate student in the Tung lab who co-led the work. These methylation markers are found across the genome, so the team first needed to measure a large number of these sites—about 400,000 of them—and then, through statistical methods and models, whittle the number of sites down to about 500 that best predicted age.

Adult social status was the strongest factor that affected aging. “Male baboons who compete successfully for high social status appear to age faster,” Tung says. “We repeatedly sampled some of these males and were able to show that the clock can speed up or slow down as males move up or down the social ladder.”

This is contrary to what we see in humans. Typically, high social status in humans predicts better health, not worse. The most wealthy and powerful humans have access to and can afford the best houses, schools, health care, and more. Those who live in poverty and have lower socioeconomic status are at increased risk and have higher rates of disease, cancer, and all-cause mortality.

Male baboons, though, have to fight for their social status. Because of this, it’s common to see male-male competition on a regular basis, where baboon observers can see a clear winner and a clear loser.

To maintain their social status, males at the top regularly have to hold their ground and defend themselves physically. Because of this, male baboons at the top tend to have more muscle mass and better body condition than lower ranking baboons. But as their physicality starts to diminish with age, a new, younger, stronger male may overcome them for the top spot.

High ranking males also spend a lot of time mate-guarding females. Around ovulation, they follow females closely and ward off other males. Mate-guarding constrains a male’s other activities, and Tung and her team think it is likely to be energetically costly—perhaps helping to explain their accelerated aging result.

So why do these males work so hard to achieve a high stress social status? It’s simple: to have offspring.

“If male baboons are going to have babies, they need to achieve high rank,” Tung says. “They will have very little chance to leave offspring if they don’t achieve high rank, which creates a powerful evolutionary motivation.”

This study highlights one way that the social environment can influence aging. “Our research shows that the manner in which social status is attained and maintained is crucial to understanding its consequences,” Tung says.

The US National Science Foundation and the US National Institutes of Health, Canadian Institute of Advanced Research, North Carolina Biotechnology Center, and the Center for Population Health and Aging funded the work.

The post For male baboons, being on top accelerates aging appeared first on Futurity.

LaptrinhX
—
For male baboons, being on top accelerates aging
Share this