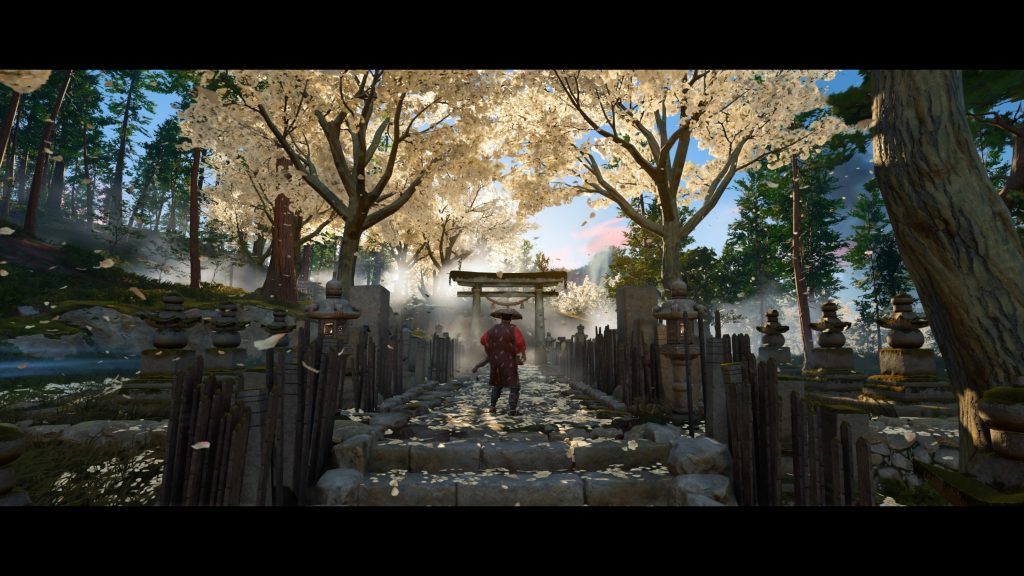 Sucker Punch began this generation with one of the first major exclusives on PS4 in the open-world action game Infamous: Second Son. While it may not be the PS4’s best exclusive, it gave players a glimpse of what the Sony console could do. So, it only seems fitting that the Seattle-based studio’s newest game, Ghost of Tsushima, would be the PS4’s last exclusive before the PS5 hits this holiday season.

It is obvious Sucker Punch has learned a lot about crafting an open-world since its last game; the island of Tsushima is one of the most captivating and beautiful worlds I have ever had the pleasure of exploring. But with combat that is deceptively simple and a pretty weak main story, Ghost of Tsushima is more of a fun love letter to samurai cinema than a completely original take on the genre. Personally, I was hoping for the latter.

“Ghost of Tsushima is more of a fun love letter to samurai cinema than a completely original take on the genre.”

In Ghost of Tsushima, you play as Jin Sakai, a samurai and the leader of Clan Sakai. The story begins with Jin and his uncle, Lord Shimura, who is the jitō of Tsushima, defending their home against Khotun Khan and his Mongolian army. It does not end well for the samurai, as Khotun Khan is able to kill nearly all of them while capturing Lord Shimura and taking control of the island. Jin is fatally wounded but is saved by a thief named Yuna. Jin then proceeds to save his captured uncle at Castle Kaneda, but fails in defeating Khotun Khan, and is thrown off a bridge. It is at this moment Jin realizes he needs some help and seeks the aid of some friends to assist with a charge against the Mongolians to hopefully take back the island of Tsushima.

I’m not an expert in Japanese history, nor am I a Kurosawa enthusiast (which the game is obviously inspired by given its “Kurosawa Mode”), so I can’t really tell you how accurately it depicts this battle or how it utilizes its blatant inspiration from the lauded filmmaker. But as someone who plays a lot of story-driven video games and watches a lot of movies, this tale isn’t all that original.

The idea of getting a group of “misfits” to take on a major threat to save life as they know it isn’t anything new. Jin’s journey in becoming the “Ghost” and questioning the samurai code isn’t this new, either. Even when putting these two plotlines together, nothing quite novel comes about as a result. And because it doesn’t take this well-worn formula into any new territory, I kind of just lost interest in the main story after the first act. The narrative is told well, but it lacks any surprise or suspense. You can tell where Jin’s story is heading right from the beginning.

Despite its lackluster main tale, the side missions have some pretty compelling stories of their own. Without spoiling anything, Lady Masako and Sensei Ishikawa’s questlines are among the best-told stories in Ghost of Tsushima. I was way more invested in what was happening in their lives than I was Jin’s. Even some of the one-shot side missions have more interesting and original stories to tell. It’s awesome that the storytelling didn’t take a hit on these smaller quests. However, I wish that originality was more ever-present in the main story. 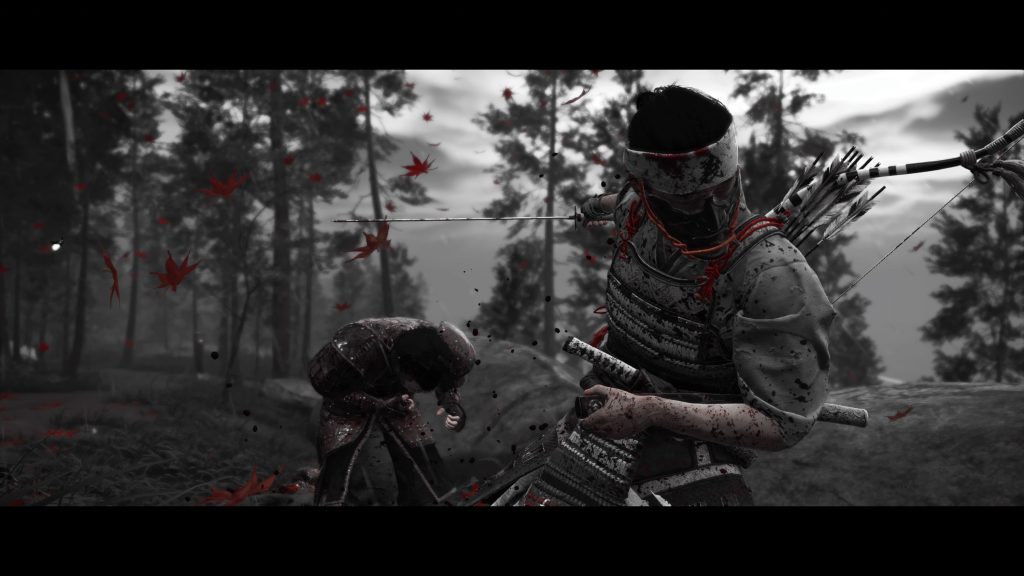 This notion of the lack of originality is also present in Ghost of Tsushima’s gameplay, albeit in more interesting ways than its storytelling. Combat is similar to the Batman: Arkham and Shadow of Mordor series. Essentially, it’s a slower-paced hack and slash that relies heavily on your ability to counter or dodge enemy attacks.

Initially, I really dug the combat. You really feel like a powerful samurai as killing enemies only takes a few hits. It also felt like I was unlocking new abilities at a good pace. From standoffs to the various stances, it felt satisfying as I progressed through the story. Having to switch stances to take care of enemies effectively kept me engaged with just about every combat scenario.

However, once I unlocked the Ghost stance (which is one of the coolest moments during Jin’s story), it didn’t really feel Jin was improving on much else. It also didn’t feel like I needed to improve at this point. Although I didn’t play this way, you could easily mainline the story, and still feel in control of every combat scenario. As long as you’re good with switching stances and utilizing some of the Ghost weapons, fighting off 5 or more enemies is pretty easy.

“The combat does feel good, it just doesn’t feel all that thoughtful.”

I also didn’t use many of the Ghost weapons that were available. Really, all I used were the sticky bombs and kunai. Both of these weapons were incredibly helpful in not only stunning the more annoying enemy types (I’m looking at you, staff boys) but also taking out anyone who was low on health. But other weapons, like the smoke, just didn’t see much use. A lot of it has to do with how clunky it feels to switch between different Ghost weapons on the fly. By default, I just made sure I had enough kunai for each fight. Otherwise, I didn’t really bother with ghost weapons unless I was really in a pickle.

All in all, those gripes are pretty minor. The combat does feel good, it just doesn’t feel all that thoughtful. There were points where missions definitely favored a stealthier approach but I was still able to charge in head-on and take care of any group of enemies pretty easily. My biggest gripe with Ghost of Tsushima’s combat is the lack of a lock-on feature. It really feels like I should be able to lock onto enemies, not just so I can single out certain enemies, but so I don’t have to also fight a camera, which does get a bit annoying at times. But once I got used to the combat, that gripe became pretty minor. 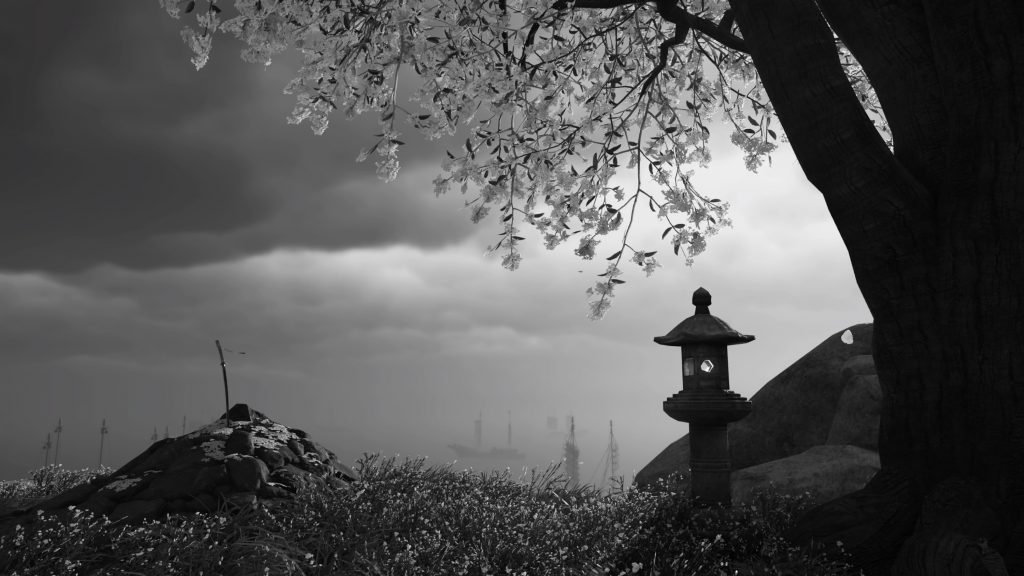 While Ghost of Tsushima’s gameplay and story may not be revolutionary, the island of Tsushima itself is the real star. I don’t think I have ever been so drawn to an open world. It’s odd, because there really isn’t much, in terms of the actual environment, that makes it stand out. There are even times when I look at a still, and it doesn’t look all that great. But how the world is designed and looking at it in motion is a sight to behold.

“I think some of the intricacies of Ghost of Tsushima’s presentation will be written off as novelties, but I really do think it boasts some of the smartest design I have seen in a video game.”

I think some of the intricacies of Ghost of Tsushima’s presentation will be written off as novelties, but I really do think it boasts of the smartest design I have seen in a video game. Using wind as an indicator for which direction to go would get annoying after a while. However, it never got old and is an awesome way to clear the screen of more visible indicators, like an arrow or a mini-map. The clean HUD allows you to take in the views, which again, look great in motion. Seeing the leaves fall, or grass moving in the wind really looks incredible, and at times tranquil. This is paired with an equally impressive photo mode that really showcases just how beautiful the island of Tsushima is.

Ghost of Tsushima may not be the perfect send off to the PS4 generation, but that doesn’t mean I didn’t have a great time playing through Jin’s life-changing journey. The worst thing I can say about Sucker Punch’s newest game is that it lacks originality. It just barely stands out. But if you really love well-crafted worlds and taking gorgeous pictures, Ghost of Tsushima is definitely worth a playthrough.

The post Ghost of Tsushima Review — My Precious Sense of Honor by Michael Ruiz appeared first on DualShockers.