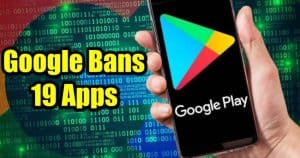 Google has banned a few dangerous apps from Google Play Store. These apps were filled with adware, so, the apps were taken down. All these apps had millions of downloads on the Play Store.

This latest news comes from the team at White Ops Satori Threat Intelligence. This team researched and discovered 19 apps which were filled with unwanted and irritating adverts. This adware can take over the app even when the device is locked, unlocked and if the device is in charge or not. The device can be attacked even if the infected app is open or not.

Some of the apps were hidden from the downloads and was disappeared. The hackers use this trick as this makes it harder for people to find and delete the apps from the devices. The team of White Ops said, they identified all these apps at the threat hunting investigations. At the time of investigations, they saw high ad traffic, and then they researched on it.

After the team looked more closely at the apps, the White Ops discovered the code adverts, and it was easy to detect the problem. All the apps in the investigation did not work as an advertisement.

White Ops named this investigation CHARTREUSEBLUR, as most of the apps which were attacked have the word “blur” in the name. And many other apps are photo editors which are popular and most downloaded apps from the Play Store.

However, Google has removed the apps from Play Store, but all those Android users who already have these apps must delete it from their phones.

The team Satori is still monitoring this threat and will identify other apps and add new apps.

Here are all the apps that were deleted in the latest attack.