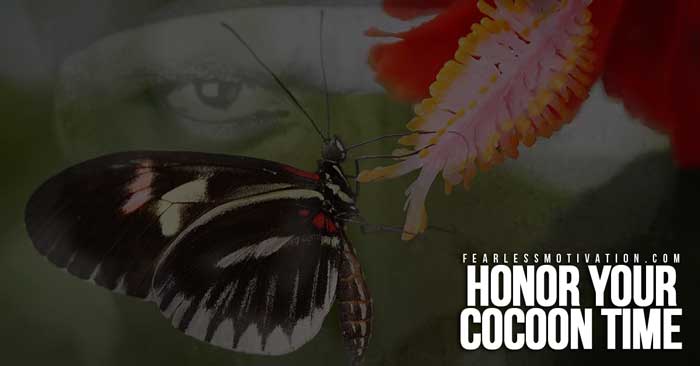 People need to be more like butterflies. To simplify the process – caterpillars create a cocoon, and after developing inside of it, they become who they desire to be! To relate butterflies to people, too many people skip the cocoon part of the process. Or they go through the cocoon part, but don’t honor it by doing what’s necessary to achieve goals, glory, and greatness (GGG). Inspired by Ray Lewis’s thought process that he described in his book, I Feel Like Going On, this article explains how to go about honoring one’s cocoon time with a focus on working towards Goals, Glory and Greatness.

Below is an excerpt from I Feel Like Going On about this butterfly metaphor – Ray Lewis is talking about his recovery time after tearing his triceps during the 2012 NFL season.

“I was smiling because, throughout my career, whenever I had an injury, I used to call it my ‘cocoon time’… Really, [butterflies are] the most amazing creatures, capable of doing the most amazing things, and probably the most incredible thing about them is the way they’re able to transform themselves. They spin themselves this little cocoon and shut themselves inside. They can’t take their mamas with them. They can’t take nobody with them. They’re on their own, and they tuck in and wait. That’s all they do, just wait. And in the waiting, that’s where this strange magic happens.

These were the kinds of things I used to think about when it was time for me to heal. Told myself it was a gift, an opportunity to block my mind off, to wrap myself in this nest of hope, possibility, whatever you want to tell yourself is going on inside that tight cocoon. You can’t take anyone in there with you. It’s just you, alone, facing that long slog back to recovery. People called it rehabilitation, but I called it rejuvenation – the way I set it up in my mind, it wasn’t a hard road, but a journey. I’d tuck in and be by myself and just deal with it. I’d just wait – for this strange magic to happen. So when I started going through my surgeries, recovering from various injuries, I took the time to turn inside myself and really heal. Kept telling myself it was my time. Kept telling myself there was nothing to worry about – in fact, the only folks with something to worry about was whoever had to deal with me once I got back to the field, because I’d had all that time to rejuvenate. I’d come back refreshed, recharged, repurposed.”

When a caterpillar is inside its cocoon, it honors the process necessary to become a butterfly. It doesn’t rush through it and ultimately develops into a better version of itself. In order for people to honor their cocoon time – any period of time they are building themselves up and working towards something – there is a similar commitment that is necessary.

Ray Lewis speaking at the Powered By Me! Student Athlete Conference (2009): “Good is fitting in. Greatness is fitting out. Good is – ‘let’s go play video games all day. Let’s do everything that we need to do so we don’t push ourselves to our limit.’ Greatness is telling a friend – ‘I can’t do that today because I got a vision that I’m chasing’ … Inside of every vision, there are missions that you got to go on – missions that sometimes your friends won’t even go with you. So when I used to leave the house with 2 or 3 sweat bags on and 2 or 3 sweatshirts on and jog 20 and 30 miles, I couldn’t find another friend to do that with me … What would you give up; what would you sacrifice to be called great?” 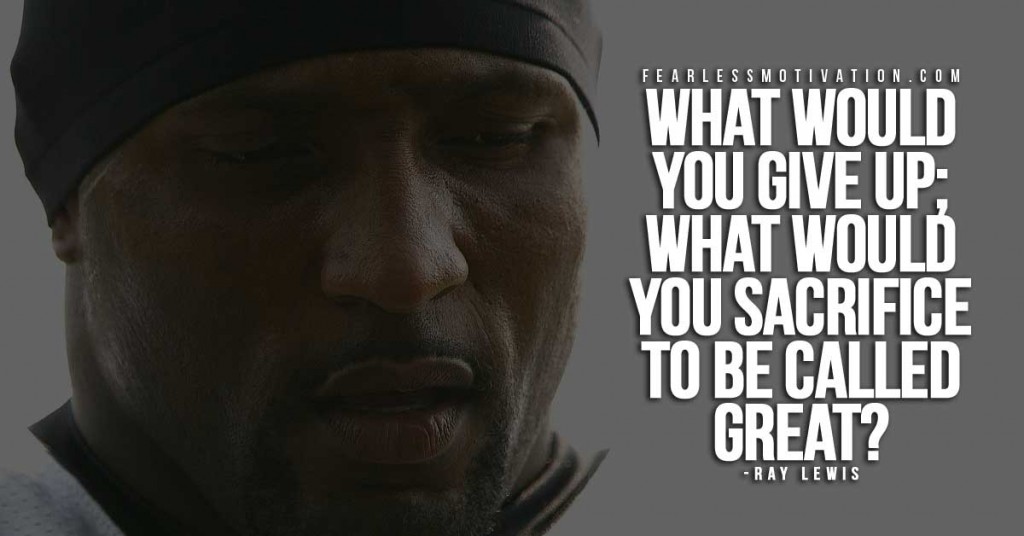 Ray’s cocoon time in the quote above is his childhood, and he made the decision to honor it through not wasting time and prioritizing his grind. Talking to USC football players in 2013, Ray spoke of his decision-making mindset, “Does this decision influence where I’m ultimately trying to go. Because if it doesn’t, you got to get rid of it.” Playing video games was not going to lead Ray Lewis to the path of becoming an NFL player, so he decided to occupy his time productively instead. Of course it is unhealthy and unproductive for everything you do to be about GGG, so it can be necessary to rest or take small breaks at times. But most people take unnecessary breaks. It’s up to you to figure out what a necessary break and an unnecessary break look like when you’re in a cocoon time.

Ray Lewis explaining his relationship with his trainer Monte Sanders (2009): “I sacrifice time away from my family … Block our hours in a day. Some days we go weeks where we don’t pick up our phones and people take it the wrong way, but that’s all you can really do. You gotta’ block out your time; you got to (have) complete focus on what you’re trying to get done, and I think that’s what makes me and him a great complement.”

Ray Lewis speaking at a press conference the week leading into Super Bowl 47 (1/30/13): “When you talk about a last ride, I have devoted myself. One of my linebacker buddies was like, ‘Have you been out any of this week?’ and I was like, ‘No, and I’m not going nowhere’, because I only want my face to be stuck in an iPad. I want to know everything about the San Francisco 49ers that when I step on the field I can make my defense a better defense. That when we walk off that field, we know we did everything in my power and I know I spent every second on focusing on winning this game” 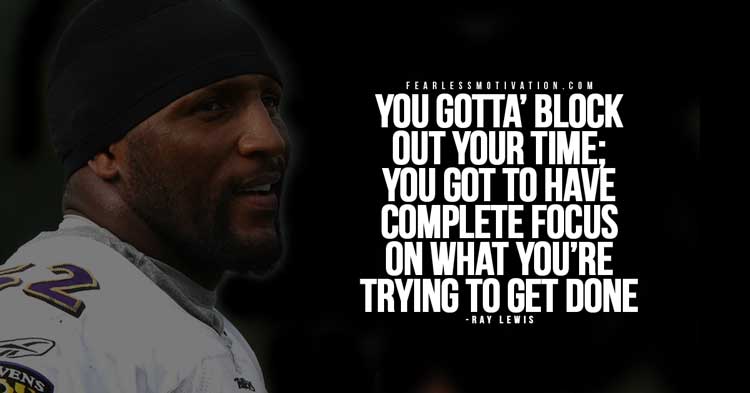 Whether it was during the NFL offseason or during the weeks leading into games, Ray Lewis honored his cocoon time by having an unrattled dedication to his GGG. Perhaps he could have gave in a little the week leading into Super Bowl 47 and entertained the pleasures outside of his hotel room. But then if the Ravens lost, could he honestly say he gave everything he had? To achieve Ray’s GGG – or maximize his chances of doing so – he made the commitment to honor his cocoon time in preparing for the game. No matter what your cocoon time looks like, it’s recommended to have a similar thought process – Not only to achieve GGG, but for self development purposes too.

Cocoon Time Paradox: All about Goals, Glory & Greatness, but not really!

Ray Lewis on his training and preparation for football (2009): “When you get away from just athletics, you realize that really you’re just challenging who you are, your will as a person to get out every day and never stop, never be satisfied. And that for me man, that’s where I’m at … My thing is I’ve never been the biggest, fastest, or strongest, but I just never met a man that would just flat out outwork me. So that’s always the thing I’ve always held onto is work.”

Embrace the process of honoring your cocoon time. Who you become along the journey is perhaps more valuable than the GGG achieved. Although Ray Lewis’ cocoon times throughout his life led to GGG by every measure accolade wise, the character he built from the process was the prideful piece for him. Ray stated to the London Warriors football team in 2012, “Nobody dictates what time I get up in the morning but me.” This idea that one should be more prideful of the grind and not the glory is a unique aspect of honoring your cocoon time. If you truly honor your cocoon time and come up short on GGG, it is ok. The self-development process of honoring your cocoon time is an achievement by itself. If a student studies all that she could for an exam and still falls short, she should still hold her head up high knowing she honored her cocoon time. That goes with anything; it’s more about having a butterfly mentality, rather than actually becoming one. Unfortunately, society, media, and people are too often focused on GGG when they should be focused on the grind. 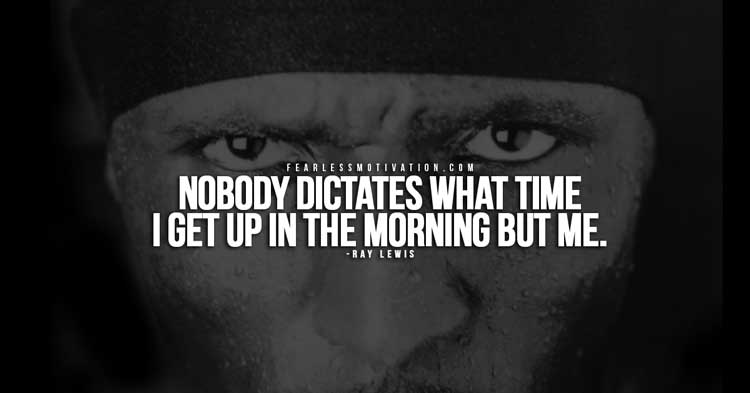 Athletes like Kobe Bryant, Serena Williams, and Dirk Nowitzki – those types of men and women – they honored their cocoon times to ultimately become champions. They embraced what it took – the sacrifices in the dark, the commitment to developing themselves to achieve GGG. Right now, the world – people included – focuses too much on GGG and not the grind necessary to achieve that. Everybody knows it’s grind before glory – it’s not a secret – but there is an unconscious delusion out there of people striving for GGG without honoring their cocoon times. For some people, it’s time to wake up and be conscious of this fact. Put your focus into your daily grind, not your destination, and your journey will take care of itself.

I’m gonna’ leave you with this thought from Man’s Search for Meaning written by Viktor E. Frankl, who was an Austrian psychiatrist and Holocaust survivor. He will be the inspiration for a Part 2 article on honoring your cocoon time through adversity.

Viktor E. Frankl: “Don’t aim at success. The more you aim at it and make it a target, the more you are going to miss it. For success, like happiness, cannot be pursued; it must ensue, and it only does so as the unintended side effect of one’s personal dedication to a cause greater than oneself or as the by-product of one’s surrender to a person other than oneself. Happiness must happen, and the same holds for success: you have to let it happen by not caring about it. I want you to listen to what your conscience commands you to do and go on to carry it out to the best of your knowledge. Then you will live to see that in the long-run—in the long-run, I say!—success will follow you precisely because you had forgotten to think about it”

Powered By Me! Conference (2009) – https://www.youtube.com/watch?v=u5FrIogjths