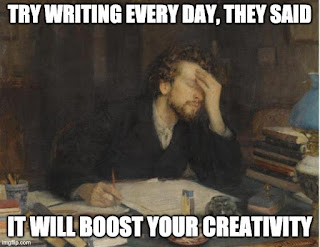 How often should you blog? This is a question that, while not often asked, has many answers. The reason it's not often asked is probably because you just have to wait a couple of days and it will pop up in one of the newsletters you somehow signed up for years ago and haven't got around to cancelling. The problem is, it will be answering the question from the perspective of someone else - maybe someone that is trying to grow an already large online following, sell online courses, or forge a new career as a writer. It might even be answered from the perspective of a company that is blogging as part of a marketing initiative.

Even if the answer is from someone trying to achieve the exact same thing that you are, they won't be you, shaped by your own experiences and subject to your own personal ups and downs. For this reason I would advise never following someone else's advice slavishly, but pick some approaches based on what appeals to you, and try a selection of them out. You should also apply this to my advice - it's typically based on what has (mostly) worked for me, and I'm not you.

I've seen a number of write ups from people who blog every day. Some reported less traffic, not more - readers deserted them as they weren't able to maintain the quality, or just got overloaded even though the blogger felt that their process had improved. Others found that their engagement went up, sometimes by as much as 1,000%, although the real success stories tend to be a few years ago, possibly because the platforms they were writing on were less crowded so a concerted effort could make a real difference.

Blogging every day definitely isn't for me, as I'm absolutely certain the quality would go downhill. It's easy to underestimate the effort required to write posts at a decent cadence, and I can't tell you the number of times I thought I had a series of 10+ posts on a topic, only to start running out of ideas by part 4 or 5. The only way I could make this happen is by flipping my blog to more of a journal, where I just write about my day, but I'd get bored with that before too long, never mind any readers.

I am tempted though, as I'm curious if there's a point where it becomes easy to dash out a post during a coffee break, and if in the future I have less demands on my time I might try it. I probably won't try it out on this blog though, I'd likely create a new space on something like Medium, so as not to alienate my current audience. They are likely to be interested in Salesforce, software development and devops (maybe remote working right now), because that's what I've written about for the last decade, and probably wouldn't enjoy the change to a diary approach. That doesn't mean it won't work for you, so it might be worth a try if you think you can take the pace. Most of the accounts of daily blogging I read are about people experimenting with it for 1-3 months, but there are a few that stick with it for years. I doubt they are doing this on top of a day job and a demanding family life, but who knows.

Marketing Insider Group recommend 2-4 posts per week to get the top results in terms of traffic and conversions, but this is for companies that are trying to convert blog readers into customers. While I could aim for that, I'm not sure what I'd do with a customer, given the only thing I really have to sell is the Visualforce Development Cookbook.  2-4 posts per week is also a lot given that I'm writing them all myself, and I already have a full time job that consumes quite a bit of my time. I could probably do a couple of posts a week for a short period of time, but I feel like I'd run out of ideas after a few months. I'd also start to resent that I'd put myself in this position and view it as a chore, which never leads to good outcomes in creative endeavours.

This is what I aim for, and I must say it's quite easy to achieve during a pandemic. Looking back at my posts over the last 12 months, I was hitting more than one a week during the periods that we were locked down, or restricted in terms of travel. When we opened up, however, I dropped down to one or two a month as I had more pressing demands on my time.

When I Have Something to Say

This is my sweet spot. Rather than putting pressure on myself to write at a particular cadence, and beating myself up when I inevitably fall behind, I write longer and more considered posts when I have something to say. If I have something to say then it will typically be about a topic that I am interested in or I care about or that I know a fair bit about. When it's all three, I can't get the words out fast enough, but even if it's one of them then the motivation is there. For a long time I didn't realise this though, and I experimented with a number of other approaches to see if I enjoyed them more, or if they had a positive effect. I reconsider my approach whenever I read a post about blogging every day, every week, or points in between, because what works for me now may not be ideal in a year or two.

There does seem to be some level of agreement that blogging with a cadence can be helpful, but I'm not sure how well that applies to technical blogs like this one. I can't imagine that if I switched to posting every Friday that there would be a bunch of people out there waiting for the white smoke to indicate a new post had been published, which is why I tend to publish as soon as I'm happy with what I've written. Again, I've tried a number of different approaches to this, trying to find the days and times that get maximum engagement, and I've never really found it makes much difference. Your mileage may vary.