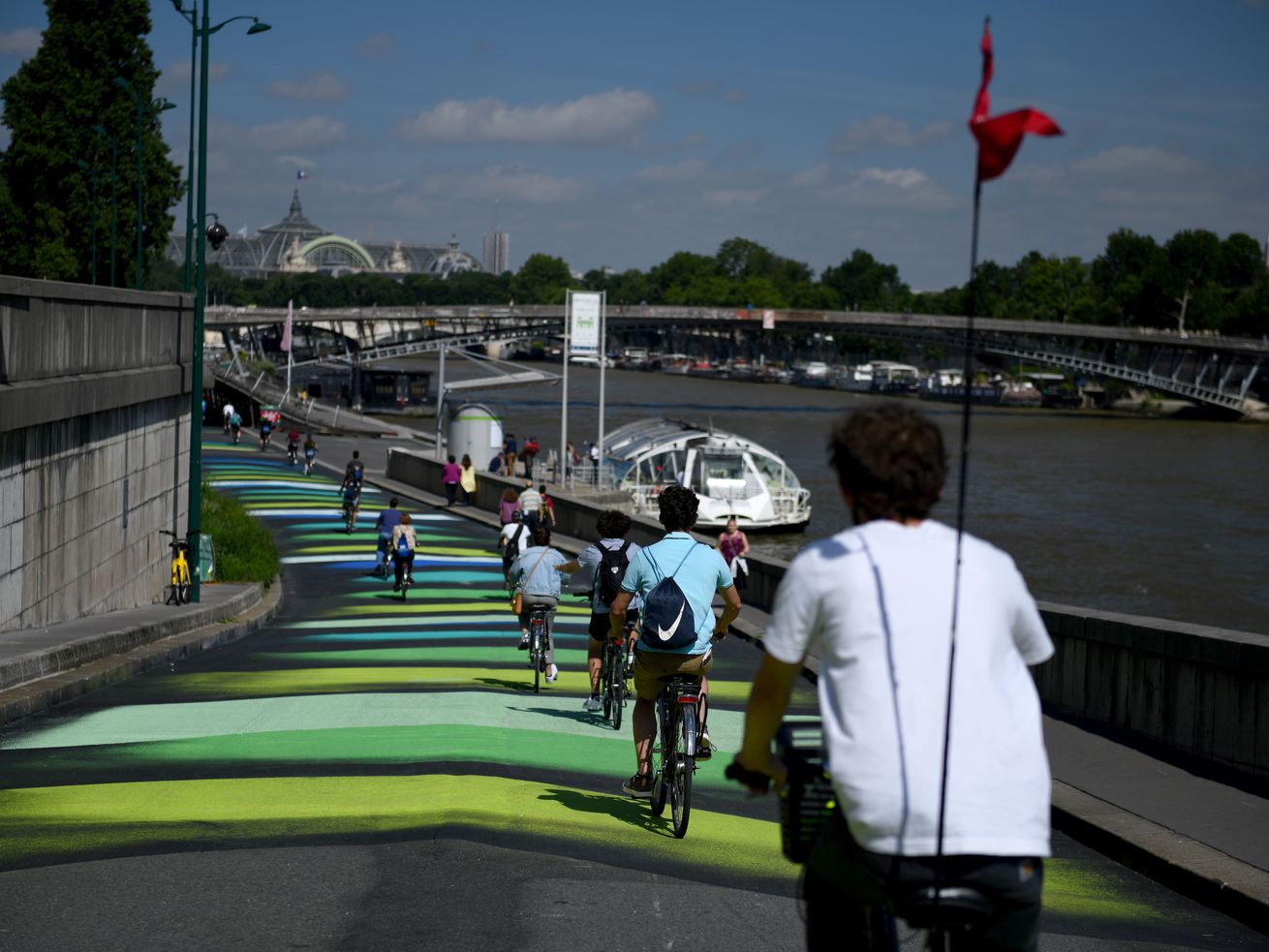 People ride bicycles on an artwork by German artist 1010 entitled “Stream” set on the banks of the river Seine in central Paris on June 15, 2018.  | AFP via Getty Images

The City of Light became the City of Bike, and U.S. cities should take notice

For cyclists in Paris, the last few years have been nothing short of revelatory. New protected bike lanes have led to a doubling, and even tripling, of the number of riders on some busy main roads. The Champs Elysées is lined with segregated cycling lanes, and more residents of the greater Paris region cycle today than take the busiest line of the city’s Metro. Since 2016, the left bank of the Seine River has been free of motor traffic, creating a new public gathering spot where, CityMetric writes, “cyclists mix with boozy sunbathers, tourists on electric scooters, and giggling children.”

Paris’s great success in improving cycling will be one of the lasting legacies of Mayor Anne Hidalgo, who has relentlessly pushed bike infrastructure, often to the displeasure of drivers and local officials, as part of her pledge to reduce emissions and make the city a cycling capital. Hidalgo’s efforts have also set an example that U.S. cities should follow: Think big, and don’t be afraid to talk about climate change and transportation.

As the climate crisis and increased traffic congestion raise questions about land use, transit policy, and our car-first views of urban living, improved cycling access offers a potential means of addressing these problems. And few urban leaders have been as successful as Hidalgo at overseeing concrete change.

“What we’ve undertaken is a whole program of adaptation, of putting nature back in this city,” Hidalgo told the New York Times. “We’re trying to build this around the individual. But change is difficult.” She added, “We can’t live as before. There’s been an acceleration in climate change.”

In a single year, from September 2018 to 2019, the number of Parisians using bikes rose 54 percent, according to the Paris mayor’s office. It’s “the culmination of years of growing restrictions on cars, the introduction of bike-sharing services, and most recently the construction of bike lanes across the French capital,” said journalist François Picard, the host of “The Debate” on the Paris-based TV channel France 24. That’s not all. The buildout of space for bikes in the City of Light has contributed to a 5 percent drop in car trips since 2010. In Paris and its surrounding Île-de-France region, cyclists now take 840,000 trips per day, more than motorcycles or scooters. Paris leapt from 13th place in 2017 to 8th in 2019 on Wired’s list of the 20 most bike-friendly cities in the world.

Mayor Hidalgo has made Plan Velo, her cycling plan, a key part of her legacy, and many voters have responded positively to her push. According to France 24, the mayor has earned a reputation for reducing the number of cars on the road and creating the bike-and-pedestrian-friendly area along the Seine. Frédéric Dabi, deputy general manager at lfop, a French polling firm, told France 24 that while the Socialist Party politician is generally shunned by conservatives and the right, ”generally when Parisians vote, they’re clearly voting on the main points of her policies, like the installment of bike lanes and lowering pollution in the air.”

As Hidalgo campaigns for re-election this year, it’s become clear that her bold push to make the city more suitable for cyclists and cut air pollution will not just be a centerpiece of her pitch to voters—she’s recently proposed greening the Champs-Elysées, creating a pair of bike-friendly public squares, and building out new biking links to the suburbs.

On January 21, she unveiled an ambitious new plan for the Ville Du Quart D’Heure, or “city of fifteen minutes,” which builds on Plan Velo and promises that every street will have a cycle path, every bridge will have protected cycleways, and every resident can walk or cycle to get anything they need. On January 29, she announced that the new pedestrian and cycling infrastructure for this plan would come at the expense of cars; 72 percent of Paris’s on-street car parking spaces would be removed and transformed into bike lanes, green spaces, vegetable plots, and playgrounds.

Her competition, for the most part, has also bought into the philosophy of Plan Velo. According to CityMetric, “her vision of a greener Paris with fewer cars and more space allocated to pedestrians and cyclists has been accepted by all major contenders for the mayoralty.”

How did Hidalgo do it?

In 2015, a year after being elected, Hidalgo released her Plan Velo, a $167 million proposal that called for doubling the number of bike lanes by 2020, from 700 to 1400 kilometers (435 to 870 miles). While roughly half of the plan has been implemented thus far, it’s arguably still transformed Paris.

The French capital, like so many major world cities, has suffered from decades of le tout-voiture, or car-centered planning. But step back from the current state of road use and look at the city map, and it’s clear there’s great potential for cycling. Paris is relatively small, roughly six miles across, and already has a road network suited for bikes: lots of grand, wide avenues that can support protected bike lanes and form a spoke-and-hub system throughout the city, as well as small side streets that by their size and nature slow down and calm car traffic.

Instead of relying on shared bike and bus lanes as it had in the past, Parisian officials decided to focus funding on protected cycling lanes, following a philosophy of fewer but better. The city has surpassed its goal of creating 10,000 new parking places for bikes by 2020, but lowered its target for building out bike lanes. As of last October, 37 percent of the new lanes had been built. Hidalgo said recently said the city would have 1,000 kilometers (621 miles) of cycle paths by 2020. In addition, the city has pushed an aggressive e-bike program to help turn more car trips into bike trips.

The pace of change has led to widespread complaints throughout 2019 about the increased number of bike infrastructure and pedestrian construction projects, especially last summer, when the city became what the New York Times called “a giant construction site” filled with grey-and-green barriers.

“There’s been a very violent reaction at times,” Hidalgo told the New York Times last fall. “Part of it has to do with being a woman. And being a woman that wants to reduce the number of cars meant that I upset lots of men. Two-thirds of public transport users are women.”

At one point, the French car owners’ association shared the mayor’s office number and asked members to call it with complaints. There have also been other bumps in the road, especially an ill-fated bike-share rollout.

But when a transit strike hit Paris in early December, due to protests against President Emmanuel Macron’s pension reform plan that shut down most public transit routes, even critics admitted that having a vastly improved cycling network was a public good. According to CityMetric, bike shops saw “an explosion of interest in the vehicle the French affectionately nickname la petite reine—the little queen.”

According to Ken McLeod, the policy director of the League of American Bicyclists, the success in Paris has come in large part from presenting a bold, citywide plan, instead of the gradual way many U.S. cities add such infrastructure, upgrading corridors one at a time after lengthy trials.

“It really seems like there’s been political leadership on bicycle and pedestrian leadership in Paris in a way we haven’t seen in the U.S.,” he tells Curbed. “I think it’s crucial to have that executive, top-level leadership. A city employee isn’t going to have the capacity and political cover to do a buildout like that.”

What happens after re-election

Hidalgo eventually wants to make Paris a mostly car-free city, part of a much wider push by leaders around the globe to rethink the car’s place in the urban landscape. Her next big initiatives, in addition to Ville Du Quart D’Heure, include following up on her plan to ban diesel cars by 2024 and fuel cars by 2030 within city limits, and a coalition of local cycling associations plans to release a proposal to extend the city’s bike network into the suburbs. Part of Hidalgo’s rush, in addition to the urgency of climate change, is transforming the city in time for the 2024 Summer Olympics.

It’s all part of her wider climate policy, which includes providing subsidized public transit for children, expanding public transit, and greening the city with new parks and urban forests.

But Hidalgo’s key message—that seriously addressing climate change can also improve your quality of life by cutting air pollution and getting more people out of cars—is one more and more leaders should echo. McLeod says that conversation linking climate change and transportation, especially given the partisan divide on environmental policies in the U.S., is making it harder to make that kind of infrastructure push underway in Paris.

“The situation is urgent, but I am confident because I know I am not alone in this battle,” Hidalgo wrote in Time magazine. “There are more and more of us fighting for a different vision of the world—a world that takes care of our most precious resources: the air we breathe, the water we drink and the places we share.”