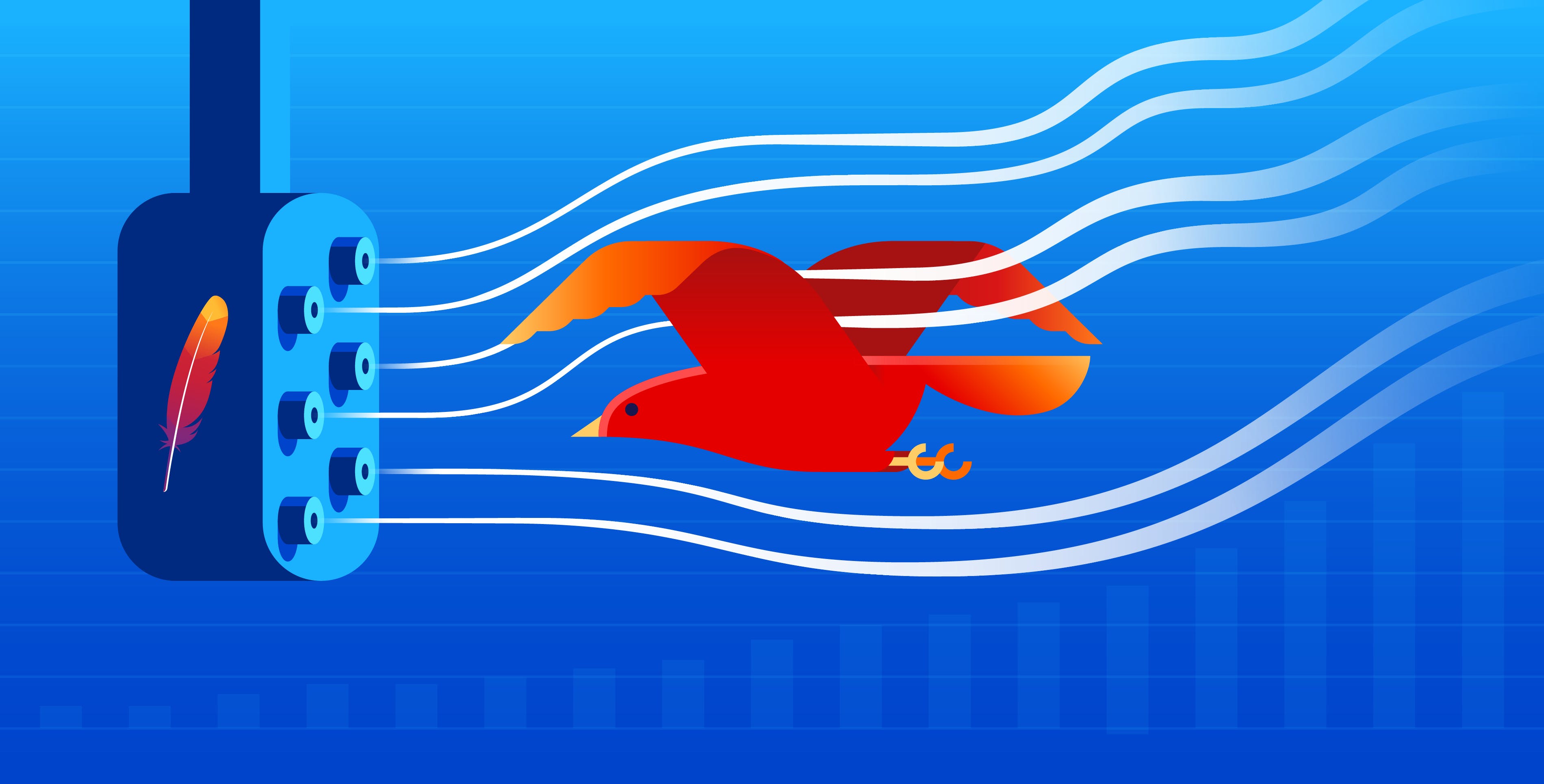 When developing web services and tuning the infrastructure that runs them, you’ll want to make sure that they handle requests quickly enough, and at a high enough volume, to meet your requirements. ApacheBench (ab) is a benchmarking tool that measures the performance of a web server by inundating it with HTTP requests and recording metrics for latency and success. ApacheBench can help you determine how much traffic your HTTP server can sustain before performance degrades, and set baselines for typical response times.

While ApacheBench was designed to benchmark the Apache web server, it is a fully fledged HTTP client that benchmarks actual connections, and you can use it to test the performance of any backend that processes HTTP requests. In this post, we will explain how ApacheBench works, and walk you through the ApacheBench metrics that can help you tune your web servers and optimize your applications, including:

ApacheBench is a command line tool that is bundled in the apache2-utils package. To install ab, run the following commands on Debian/Ubuntu platforms:

ApacheBench allows you to configure the number of requests to send, a timeout limit, and request headers. ab will send the requests, wait for a response (up to a user-specified timeout), and output statistics as a report.

You can run an ApacheBench command with the following format:

The only required argument is the address of the web server, followed by a / (URLs without the trailing / will cause ab to return an error) and an optional URL path. If you don’t specify any options, ApacheBench will send a single request. ab’s options allow you to adjust the volume of requests, as well as (for specialized cases) their headers and request bodies. Some commonly used options include:

If you’re using both the -t and the -n flags, note that-t should always go first—otherwise ApacheBench will override the value of -n and assign the default -n value of 50000, or 50,000 requests. Additionally, ab runs on a single thread—the -c value tells ab how many file descriptors to allocate at a time for TCP connections, not how many HTTP requests to send simultaneously. The -c flag does allow ab to complete its tests in less time, and simulates a higher number of concurrent connections. The two timeseries graphs below, for example, show the number of concurrent connections as well as requests per second for the command:

When using ApacheBench, you’ll want to understand its constraints, which stem from the fact that ab measures actual HTTP requests between two servers that may or may not run on the same host. First, you’ll want to make sure that the host conducting an ab test has enough CPU resources to make all TCP connections you’ve specified, as well as enough memory available to store the state of each connection (ab allocates memory based on the number of requests).

Other constraints include the fact that ApacheBench’s send-everything-at-once approach may not reflect the way your application handles requests over time; and the distance between the server and ab client (e.g., the same host or different availability zones) will affect latency scores. As a result, ab requests may not reflect the sorts of latencies you can expect to see in your usual production load. You’ll get the most out of ApacheBench when using the relative results of your tests—not “How fast are responses?” but “Are responses getting faster?“—to see how effective your efforts are to optimize your application code, server configuration, load balancing architecture, and so on.

After finishing its tests, ApacheBench produces a report that resembles the code snippet below. Later in this section, we will explain the different metrics provided in this report, such as:

Time taken for tests measures the duration between when ApacheBench first connects to the server and when it receives the final response or is interrupted with Ctrl-C. This metric is useful if you’re conducting repeated ab tests while optimizing your application or tuning your web server, and want a single score to consult for signs of improvement.

ApacheBench provides two variations on this metric, and both depend on the number of responses that ab has finished processing (done), as well as the value of the metric Time taken for tests (timetaken). Both multiply their results by 1,000 to get a number in milliseconds.

The first Time per request metric doesn’t take the concurrency value into account:

The second version of Time per request accounts for the number of concurrent connections the user has configured ab to make, using the -c option (concurrency):

If you set a -c value greater than 1, the second Time per request metric should (in theory) provide a more accurate assessment of how long each request takes.

You should treat both Time taken for tests and Time per request as rough indicators of web server performance under specific levels of load. Tracking these values over time can help you assess your optimization efforts, and unusually high or low values can point to CPU saturation on the web server, code changes, or other events that you’ll want to investigate in more detail.

For each connection it makes, ab stores five timestamps:

ab uses these timestamps to create a data object for each connection, containing the following properties:

From there, ab uses the data object to calculate the remaining latency-related metrics: aggregated connection times, percentiles, and, if you use the -g flag, data for individual requests.

After inspecting ApacheBench’s top-level latency metrics, you can track the duration of different stages of the request-response cycle. ab aggregates properties from its per-request data objects to calculate the min, mean, sd (standard deviation), median, and max of each stage, all in milliseconds:

The output will resemble the following:

These metrics give you a more nuanced understanding than Time taken for tests and Time per request, allowing you to see which part of the request-response cycle was responsible for the overall latency. Further, these metrics are based on the data object for each request, rather than the start and end times of ab’s tests.

In the above example, we can see that Connect was on average (i.e., in both mean and median) the longest part of the cycle, though also the one with the highest standard deviation. Since the Connect metric depends on client latency as well as server latency, we could investigate each of these, determining which side of the connection is responsible for the variation. Then we’d consider focusing our optimization efforts on how our backend handles new TCP connections.

The final ApacheBench report also includes a breakdown of request latency percentiles, giving you a more detailed view of request latency distribution than the standard deviations within the Connection Times table. The percentile breakdown resembles the following. In the report, “certain time” refers to the value of the time property (defined above).

Unlike the Connection Times table, these metrics are not broken down by stage of the request-response cycle. As a result, ab’s latency metrics are best viewed together to get a comprehensive view of web server performance:

ApacheBench can also display data about each connection in tab-separated values (TSV) format, allowing you to calculate values that are not available within the standard ab report, such as wait time percentiles. This data comes from the same data objects that ab uses to calculate Connection Times and percentiles. These per-request values are:

To access per-request data in TSV format, use the -g flag in your ab command, specifying the path to the output file. For example, let’s say you run this command:

The first five rows of the data in the plot.tsv file will resemble the following.

The -g flag gives you flexibility in how you analyze request data. You could, for example, plot the dtime of each request in a timeseries graph (i.e., by using gnuplot, spreadsheet software, or a graphics library), indicating whether increased load on the server affected the performance of requests after a certain point.

Since ApacheBench makes real requests to an HTTP server, it’s important to understand the sorts of responses your web servers are returning. ab allows you to track both non-2xx response codes and errors that arise when making requests.

One way to understand the responses from your web servers is to count those that return an error or a failure. This is helpful if your goal is to benchmark deliberately unsuccessful requests (e.g., the time it takes to load a 404 page after a redesign), or requests that are not guaranteed to return a successful response (e.g., in production environments).

It’s important to know that ab will classify 3xx, 4xx, and 5xx response codes as Non-2xx responses, and report this metric in a format similar to this:

You can see which status codes make up the “non-2xx” responses by adding the -v <INTEGER> option when running ab, where a value of 2 will show the headers and body of each response in STDOUT. You can also send HTTP logs from your server to a dedicated monitoring platform like Datadog to aggregate responses by status code.

Connections between ApacheBench and your web server can fail just like any TCP connection, and ab counts failures within four different categories:

The following comes from running an ab command with the -n option set to 1000 and the URL set to www.google.com/.

The high number of Length-related errors is likely due to Google’s dynamic content. In a well-known bug (since marked as “a bug which will never be fixed”),ab will treat requests as failures if the content length of their responses is variable. This is because ab stores the length of the first response it receives, and compares subsequent lengths to that value. This means that you should disregard length-related failures when you’re using ab to test dynamic sites.

In general, the Failed request metrics monitor activity at the transport layer, i.e., with your TCP connections, rather than at the application layer. If you see nonzero results for Failed requests, you’ll want to investigate your web server for possible issues with handling TCP connections.

In this post, we’ve shown you how to use ApacheBench to measure the performance of your HTTP servers, explored some limitations of ApacheBench, and explained the metrics that ApacheBench can provide. You can also use Datadog to get full visibility into your HTTP servers, including Apache, NGINX, and Gunicorn, along with 350 other technologies. Datadog can provide complete visibility into HTTP response latency by analyzing server logs, tracing requests as they travel across distributed services, collecting network metrics from your hosts, and simulating HTTP requests from clients around the world—check out our free trial.