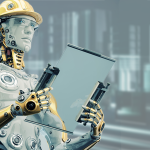 With the media so over-run by stories of robots taking our jobs, we might be forgiven for thinking some of that pessimism would be finding it's way into the minds of employees themselves. Alas, a recent study from software company Pegasystems suggests that most workers aren't really that worried.

The study saw executives from a range of different sectors quizzed on the role they thought AI will play in their workplace in the coming years. The results revealed that fully 86% of executives are comfortable with the way AI is, and will be, introduced into their workplace. Indeed, over two-thirds of them fully expected the future workforce to be a mixture of man and (intelligent) machine.

Whilst a good number did expect certain tasks to be automated, they also thought that the people currently performing those jobs will be reassigned to other parts of the business rather than made redundant.

Good for the Goose...

Interestingly, however, whilst the executives were generally enthusiastic about the impact AI would have on their workforce, they were less enthusiastic about the potential for being managed by AI themselves. A significant 84% said they'd be unhappy at such a prospect, albeit high levels of transparency and auditability would be enough to soften the views of many of this group.

They are, however, confident that AI will make work better for most employees, with routine work phased out, allowing people to take on a wider range of more rewarding roles. This will certainly be true of more junior staff, who most executives feel will be empowered by AI to make more informed decisions.

Meanwhile, roles that require skills such as emotional intelligence, judgment, and cultural understanding will remain predominantly performed by humans.

I wouldn't say there is anything too groundbreaking in the study, but it's yet more grist for the mill.