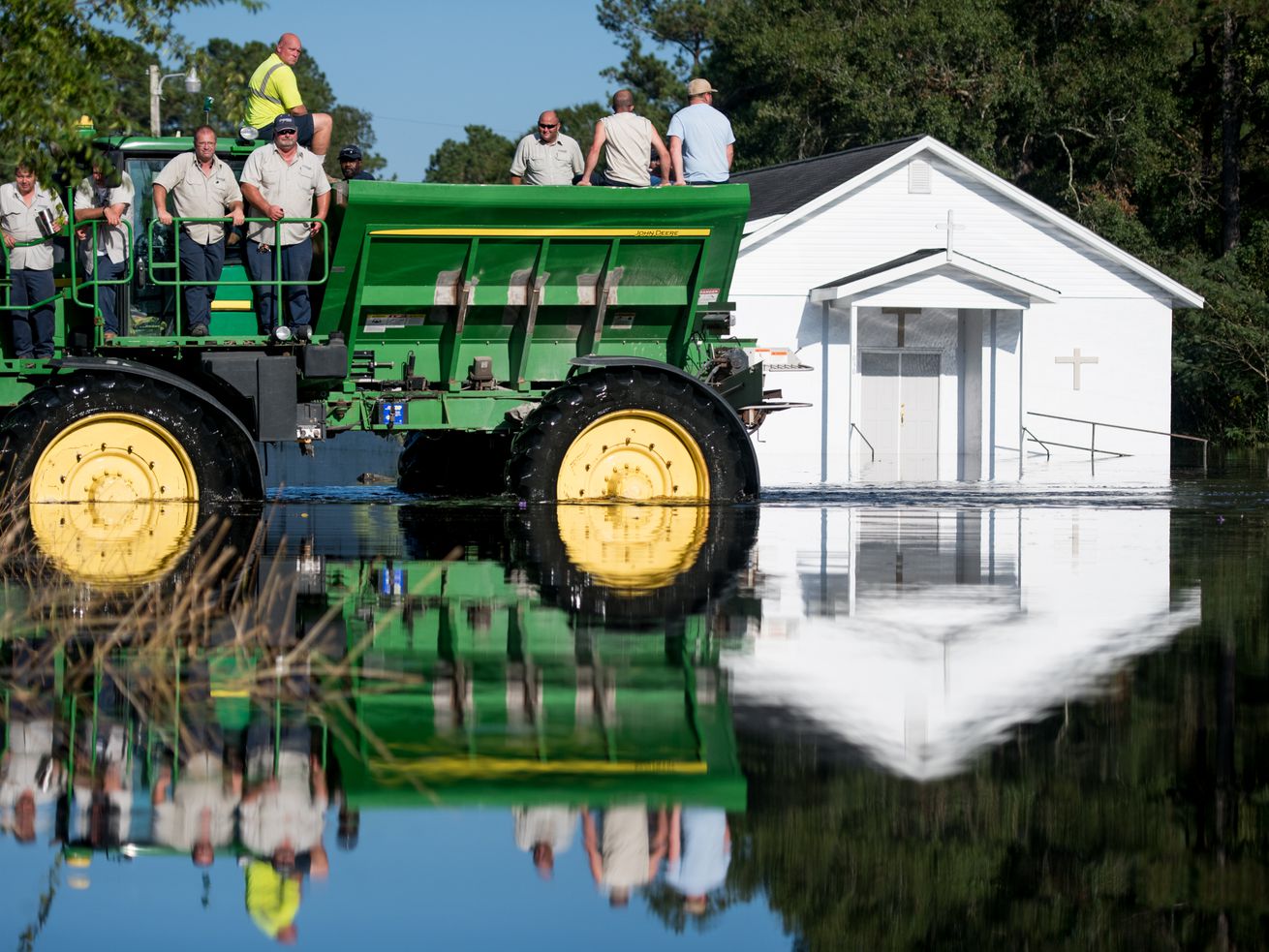 The floodwaters are finally starting to recede from Hurricane Florence, a storm that dumped upward of 35 inches of rain in places and more than 10 trillion gallons across North Carolina, South Carolina, and Virginia. The storm was a 1,000-year rain event, damaging thousands of structures, including toxic animal waste containment sites, which sent bacteria and hazardous chemicals into the water. At least 50 people died as a result of Florence and damages estimates run as high as $22 billion.

In the aftermath of extreme weather events like Florence, there’s an increasing urgency to understand just how much climate change affected the outcome. On the one hand, climate change will never cause a single event. But there’s more and more compelling scientific evidence that global warming is providing already-strong storms like Florence with even more fuel, which in turn can lead to more damage and destruction on land.

That’s why climate scientists, partly in response to journalists who’ve been asking about the role of climate change in extreme weather events, have begun spending more time and resources on teasing out the link.

Several months after Hurricane Harvey, the massive storm that deluged Houston in 2017, researchers attributed 38 percent of the storm’s record rainfall to global warming. This year, with Hurricane Florence, we saw scientists trying to figure out the influence of climate change much faster, almost in real-time. And what they’ve found is this: Human activity vastly increased the amount of rain the storm produced and expanded the extent of its flooding. Here’s how.

Climate change strengthens the raw ingredients of a hurricane’s destruction

The first component of a hurricane is warm water. Hurricanes require sea surface temperatures of 27 degrees Celsius (82 degrees Fahrenheit) or higher to have enough energy to drive the storm. Regions with hotter waters can also cause existing hurricanes to intensify as they pass through.

Climate change has already pushed up ocean temperatures around the world and increased the length of seasons where waters are warm enough to sustain a hurricane. While it doesn’t necessarily change the frequency of hurricanes, it means that the storms that do form are likely to be more severe and last longer.

The moisture from the warm sea surface then enters the atmosphere. Hotter temperatures mean that the air can hold on to more moisture. Every degree Celsius increase in temperature means a 7 percent increase in the amount of water air can contain. This increases the likelihood and severity of extreme rainfall events, including those that occur during hurricanes.

Heat and humidity then combine to charge up the wind and rainfall from a cyclone. “Hurricanes live and die by the amount of rainfall they make out of moisture,” George Huffman, a research meteorologist at NASA Goddard Space Flight Center, told Vox last year.

Finally, climate change is forcing up sea levels around the world. This is due to melting ice on land flowing into the ocean as well as the expansion of seawater itself as it heats up. Sea levels in a given region can also rise as the land subsides, whether through natural erosion, groundwater depletion, or coastal development.

So when a storm charges toward a coast, storm surges get higher and move further inland, sending water over more properties and putting more lives at risk.

Axios reported last week that one in five of the homes struck by Florence suffered damage exacerbated by the rising ocean. The First Street Foundation, a group that studies sea level rise, looked at historical records, tide and river gauges, and aerial imaging to conduct their analysis.

The group told Axios that the storm surge from Hurricane Florence flooded more than 51,000 properties. A flooded property is defined as one with water inundating at least 25 percent of its area.

And sea levels going up since 1970 led Hurricane Florence to “significantly affect” more than 11,000 additional homes than would have been inundated had seas remained at their previous levels. The US Army Corps of Engineers projects that sea levels will rise by more than a foot across the coasts of North Carolina and South Carolina. Should a storm comparable to Florence occur again, that would double the number of affected homes.

As for Florence’s rainfall, another group of researchers estimated that it poured out 50 percent more rain due to climate change. Kevin Reed, a professor of atmospheric science at Stony Brook University who helped put the estimate together, said his team used a methodology similar to that used by scientists to measure human influence in past storms.

Reed said the rainfall predictions made as Florence hit the coast held up well. “Our preliminary analysis shows that the forecast was fairly successful in where the storm made rainfall,” he said. This means that the estimates of human influence on the storm’s rainfall also stand up well, since they were built on the forecasts.

But Reed acknowledged that scrambling to figure out how much humanity is to blame while a storm is still underway is mostly about trying to demonstrate the connection to an enraptured public. “The jury is still out on how useful these are,” he said. For people in the path of a storm, it’s vital to know where it will go, but it doesn’t really help evacuation efforts to know just how much climate change is to blame.

However, helping the public understand that climate change isn’t a far-off event but a phenomenon that’s having consequences right now could shape better planning and risk mitigation strategies in storm-prone regions. North Carolina infamously passed a law in 2012 that banned using sea level rise projections in coastal planning that drew on climate change. Connecting the dots between more severe storms and climate change could help states come up with better policies, or at least stop the really bad ones.

And there’s still more work to do in figuring out how much of Florence’s destruction can be traced back to human activity. Researchers are still analyzing broader weather patterns and trying to understand why the storm slowed down as it came over land, allowing it to dump a massive amount of rain over a relatively small area. Reed said his team is working on a more detailed climate attribution study for Hurricane Florence that he will submit for publication in a few months.

LaptrinhX
—
Hurricane Florence caused up to $22 billion in damages. Climate change made the storm worse.
Share this