I discussed my love of exploring in the last Incite, and I have been fortunate to have time this summer to actually explore a bit. The first exploration was a family vacation to NYC. Well, kind of NYC. My Dad has a place on the Jersey shore, so we headed up there for a couple days and took day trips to New York City to do the tourist thing.

For a guy who grew up in the NY metro area, it’s a bit weird that I had never been to the Statue of Liberty. The twins studied the history of the Statue and Ellis Island this year in school, so I figured it was time. That was the first day trip, and we were fortunate to be accompanied by Dad and his wife, who spent a bunch of time in the archives trying to find our relatives who came to the US in the early 1900s. We got to tour the base of Lady Liberty’s pedestal, but I wasn’t on the ball enough to get tickets to climb up to the crown. There is always next time.

A few days later we went to the new World Trade Center. I hadn’t been to the new building yet and hadn’t seen the 9/11 memorial. The memorial was very well done, a powerful reminder of the resilience of NYC and its people. I made it a point to find the name of a fraternity brother who passed away in the attacks, and it gave me an opportunity to personalize the story for the kids. Then we headed up to the WTC observation deck. That really did put us on top of the world. It was a clear day and we could see for miles and miles and miles. The elevators were awesome, showing the skyline from 1850 to the present day as we rose 104 stories. It was an incredible effect, and the rest of the observation deck was well done. I highly recommend it for visitors to NY (and locals playing hooky for a day).

Then the kids went off to camp and I hit the road again. Rich was kind enough to invite me to spend the July 4th weekend in Boulder, where he was spending a few weeks over the summer with family. We ran a 4K race on July 4th, and drank what seemed to be our weight in beer (Avery Brewing FTW) afterwards. It was hot and I burned a lot of calories running, so the beer was OK for my waistline. That’s my story and I’m sticking to it.

The next day Rich took me on a ‘hike’. I had no idea what he meant until it was too late to turn back. We did a 2,600’ elevation change (or something like that) and summited Bear Peak. We ended up hiking about 8.5 miles in a bit over 5 hours. At one point I told Rich I was good, about 150’ from the summit (facing a challenging climb). He let me know I wasn’t good, and I needed to keep going. I’m glad he did because it was both awesome and inspiring to get to the top. 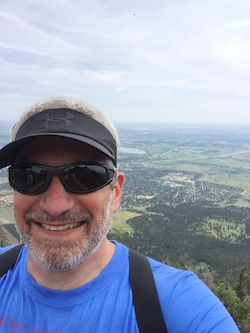 I’ve never really been the outdoorsy type, so this was way outside my comfort zone. But I pushed through. I got to the top, and as Rich told me would happen before the hike, everything became crystal clear. It was so peaceful. The climb made me appreciate how far I’ve come. I had a similar feeling when I crossed the starting line during my last half marathon. I reflected on how unlikely it was that I would be right there, right then. Unlikely according to both who I thought I was and what I thought I could achieve.

It turns out those limitations were in my own mind. Of my own making. And not real. So now I have been to the top of two different worlds, exploring and getting there via totally different paths. Those experiences provided totally different perspectives. All I know right now is that I don’t know. I don’t know what the future holds. I don’t know how many more hills I’ll climb or races I’ll run or businesses I’ll start or places I’ll live, or anything for that matter. But I do know it’s going to be very exciting and cool to find out.

The fine folks at the RSA Conference posted the talk Jennifer Minella and I did on mindfulness at the 2014 conference. You can check it out on YouTube. Take an hour and check it out. Your emails, alerts and Twitter timeline will be there when you get back.

Have you checked out our new video podcast? Rich, Adrian, and Mike get into a Google Hangout and.. hang out. We talk a bit about security as well. We try to keep these to 15 minutes or less, and usually fail.

We are back at work on a variety of blog series, so here is a list of the research currently underway. Remember you can get our Heavy Feed via RSS, with our content in all its unabridged glory. And you can get all our research papers too.