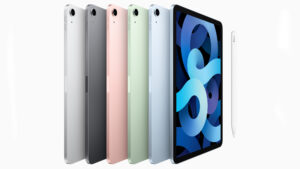 Though we knew the new 10.5-inch iPad Air was dropping at the end of October, it was unclear until now when pre-orders would launch or when it would release.

Though the new iPad Air shares several features with the iPad Pro (2020), including a USB-C port, 2nd-generation Apple Pencil support, a display with P3 wide colour support and an anti-reflective coating, it’s also unique in a few ways beyond its colourful design.

For example, it’s Apple’s first tablet to feature its A14 Bionic chip, and it includes a fingerprint sensor embedded in its power button instead of Touch ID or Face ID. That said, it doesn’t include the iPad Pro’s 120Hz ‘ProMotion’ display or LiDAR sensor, despite coming equipped with a more powerful processor than Apple’s highest-end tablet.

MobileSyrup will have more on the iPad Air in the coming days.