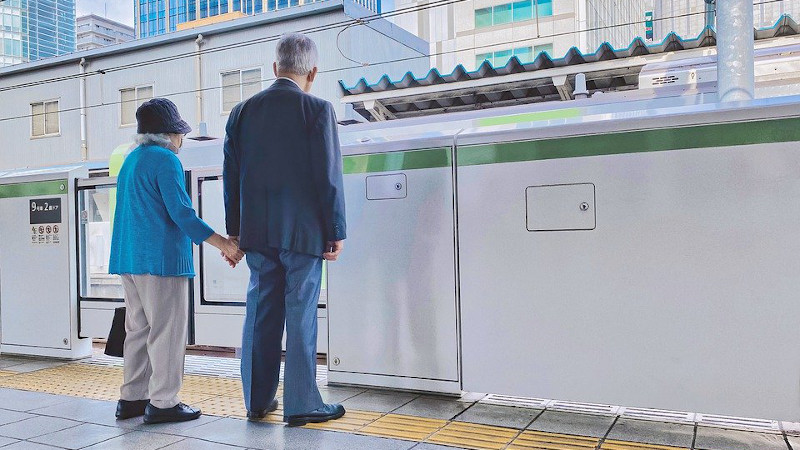 Japan has the world’s most aged population. As the number of elderly people increases, the benefits the government funds, such as pensions, medical care and nursing care, have been swelling. Since these benefits are mainly financed by taxes and social insurance premiums paid by the working-age population, the burden will be heavier on future generations as Japan continues to age.

‘Generational accounting’ measures the balance between government services (including social security) received and taxes and social insurance premiums paid by each generation. It is estimated that in 2010, the net burden of the 0-year-old generation will be 25 per cent heavier than that of the 90-year-old generation.

In Japan, life expectancy is increasing in parallel with an increase in the elderly population, but there is a bright side to longevity.

There is also a benefit to working for a longer time. Currently after age 65, people start to receive public pensions. The number of people who stop working increases with age. If people worked until the age of 75, paying taxes and social insurance premiums, the primary fiscal balance of Japan’s national and local governments would improve by 6–7 per cent of GDP. If this money is used to reduce the burden on the younger generation, they would be able to enjoy more consumption and the disadvantages facing them under the current social and employment structure would disappear.

The question is whether working until 75 is a realistic possibility. Challenges include the health of workers and where they would work.

First, on the health front, working until 75 is possible if Japan sets the year 2060 as the target year for this change. As life expectancy increases, healthy life expectancy is also expected to increase. By 2060, half of the Japanese population will be able to stay healthy until the age of 80, with the term healthy here referring to having no problems in daily life functioning.

But the situation will not change just because of this call to action. It can be troublesome for companies to continue hiring the elderly and labour costs will increase. Based on trends in Japan to date, it is estimated that by 2060 continuous employment will only be widely established up to the age of 70 and will not reach the age of 75. Providing recurrent education for middle-aged and older workers to update their skills will be important in ensuring that companies are willing to hire older workers.

It is also politically difficult to raise the starting age for pension payments. Politicians are reluctant to adopt policies that reduce benefits for the elderly if they are opposed by the elderly who have a high voter turnout.

As life expectancy increases, new policy efforts are needed to increase the age of retirement. In line with this, steady and continuous efforts to transform the economy and society will also be needed.

*About the author: Sumio Saruyama is Lead Economist at the Japan Center for Economic Research (JCER).