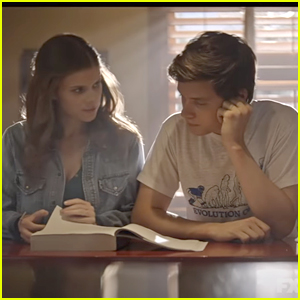 Kate Mara and Nick Robinson start up a heated, illegal affair in the first trailer for FX’s A Teacher.

The two star as the teacher and student who enter into a forbidden relationship.

Claire’s life changes when Eric (Robinson), a charming all-American senior in her English class, takes an unexpected interest in her. Popular and outgoing, Eric is the captain of the soccer team and nearly inseparable from his best friends, Logan Davis (Shane Harper) and Josh Smith (Dylan Schmid).

Everything seems perfect on the surface, but Eric is forced to juggle the pressures of school, applying for college and a part-time job, all while helping take care of his two younger brothers so his mother Sandy (Rya Ingrid Kihlstedt) can support the family. Claire and Eric discover an undeniable connection that allows them to escape their individual realities, but their relationship accelerates faster than either could anticipate.

The permanent damage left in the wake of Claire and Eric’s illicit affair becomes impossible for them, and their friends and family, to ignore.

The first three episodes are available on November 10, on FX on Hulu.