Here’s something that has changed under quarantine: I now place holds on books. I so rarely did it in the olden days! I used to go to the library every Saturday or every second Saturday, and I didn’t need to place holds, because there were always loads of amazing books to read. I would make a list of maybe five specific books that I wanted to get that day, and I’d get them, but then I spent most of my library trip trawling the New Books shelves in every genre. I had a system! Nonfiction first! Then regular fiction! Then a quick glance at historical, mysteries, and romance, before landing on science fiction and fantasy and comics. And it was heaven! The perfect library trip! What need have I for holds in this paradise?

But now I do not go to the library, because libraries shouldn’t be open for browsing, because library staff need to be safe from COVID too. Instead I swing by and do holds pick-ups. This is sad and I miss my old routine. I miss all my old routines. THAT SAID, because I have to place holds if I want any library books, I am forced to place holds on books that cannot be found at my primary library location. I never used to do this! I never needed to! Now I am doing it, which means I am getting my hands on books I have been meaning to read for several years. Like Kaveena. Hat tip to my library for getting weird translated small-press African literature. I respect you, library. I desire your prosperity for all of time.

Kaveena is about the collapse of a fictional African dictator in a country that was once colonized by the French. It’s also about the white European businessman who orchestrated his rise and fall, and it’s about the military general who finds himself living with the corpse of the dictator and in fear of the businessman. At the center of everything is the memory of a six-year-old child, Kaveena, killed several years ago in a ritual murder of which the businessman is definitely guilty and the dictator insists that he is not. 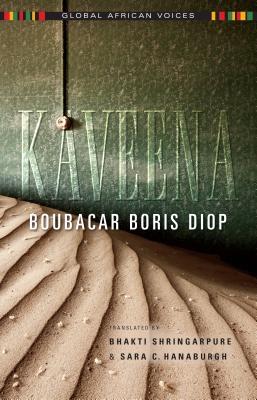 Kaveena is about colonial and postcolonial economies: The European guy, Pierre Castaneda, owns a mining company and exerts most of his effort to protect his financial interests no matter the human cost. Castenda is based — the book’s introduction helpfully informs me! I would not have known this on my own! — on Jacques Foccart, who spent most of his career variously propping up African dictators who were friendly to French economic interests and sabotaging African leaders who were not friendly to French economic interests. It was a terrific reminder that colonialism didn’t end when formerly colonized nations attained independence. By contrast, the colonizers continued to hold sway over many/most of those countries, refusing to let go of their businesses there unless absolutely forced to do so. Extractive imperialism! It never fucking ends!

Though the point-of-view characters are the dictator, N’Ko Nikiema, and the general, Asante Kroma, the true drivers of the plot are not the men. The memory of Kaveena hangs over everything that happens: One of the reasons the general is at such perpetual risk from Pierre Castaneda is Castaneda’s fear that Kroma has and will reveal the videotape of Kaveena’s death. It’s the one atrocity (in a career of atrocities) that Castaneda can’t deny and can’t escape from. And what you realize as you continue to read the book is that Castaneda isn’t truly running things; Kaveena’s mother is running things. She is an artist and a sex worker and someone whose words and actions the men can never quite read. But she is, inexorably, pursuing an agenda of her own.

As I have expected for the two years it has taken me to read this damn book, I really really liked Kaveena. It’s a beautifully written, flawlessly imagined depiction of the wounds of imperialism, greed, and misogyny. It depicts a world in which economic interests take precedence over everything else. So. You know. The real world.