The record-setting expansion of the trade deficit in December has fired up an economic debate at the center of President Barack Obama’s push to negotiate a giant trade agreement with 11 Pacific partners.

But the administration, backed by most Republican lawmakers, takes the opposite point of view: Officials say if trade barriers aren’t lowered further, it will be hard to boost exports and improve the balance of trade.

The debate between the diametrically opposed viewpoints is heating up as the dollar strengthens against other currencies, as the U.S. seeks to sign the Pacific trade deal, and as more U.S. data show exports trailing behind imports.

The Commerce Department said Thursday the U.S. trade deficit in December widened by the largest amount ever in dollar terms, to $46.56 billion. For all of 2014, the trade deficits in goods with China and the European Union hit records, totaling nearly half a trillion dollars. Mr. Obama fell well short of his goal of doubling exports over five years, with the shipment of goods abroad rising just 54% between 2009 and 2014.

Stefan Selig, the undersecretary of commerce for international trade, said the data shows rising exports to countries with free-trade agreements. He acknowledged that the dollar, which he said is “likely to remain strong,” is a drag on exports and said that’s a reason to lower trade barriers through the Trans-Pacific Partnership and other deals.

Commerce Secretary Penny Pritzker weighed in with a series of tweets, for example:

US #exports to Free Trade Agreement partner countries reached $765 billion – another record – up 4.3% from 2013 http://t.co/xrmORkY9di

Rep. Paul Ryan, the Republican chairman of the House committee that oversees trade, said in a speech Thursday that “the point is, if we do nothing, the red tape and barriers to our exports will only multiply.”

But critics said the data should be a wakeup call about trade policy.

“This abysmal new data shows how the past agreements that serve as the template for the trade deals Obama is now pushing destroy more middle-class jobs and further suppress wages,” said Lori Wallach, trade expert at watchdog group Public Citizen. 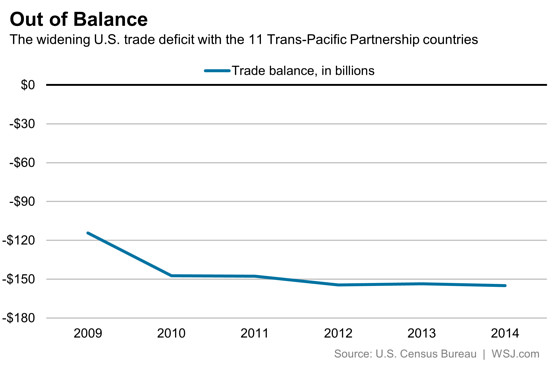 How the U.S. Oil Boom Is Altering the Trade Deficit