The Internet is full of complaints of Windows users who had their systems rebooted by Windows Update while something important was done on the system. Maybe it was a game that users played, some rendering or number crunching that was going on, or a big download.

Windows Update's logic, if you want to call it that, was quite flawed up until now because it regularly interrupted the work of users.

Microsoft tried several methods to reduce the likelihood of reboots happening in the wrong moment after the download and installation of updates; Microsoft made updates smaller and even smaller with the move from delta updates to express updates, the promise that updates would not restart the system automatically anymore, or new options to defer updates or to pause updating.

Have you ever had to stop what you were doing, or wait for your computer to boot up because the device updated at the wrong time? We heard you, and to alleviate this pain, if you have an update pending we’ve updated our reboot logic to use a new system that is more adaptive and proactive. We trained a predictive model that can accurately predict when the right time to restart the device is. Meaning, that we will not only check if you are currently using your device before we restart, but we will also try to predict if you had just left the device to grab a cup of coffee and return shortly after.

The new model uses "cloud infrastructure" according to Microsoft which allows the company to "update the model with minimal turnaround time based on" performance insights. 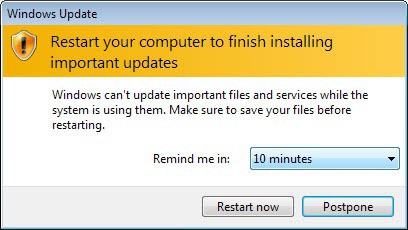 The predictive nature of the new system learns and adapts according to Microsoft to distinguish between a short coffee break and longer pauses that are ideal for updates.

Microsoft did not mention if the new functionality will become available for Windows 7, Windows 8.1, and the server variants as well. My guess is, they won't.

Windows Updates, especially on Windows 10, have been disruptive in the past. Microsoft's two feature updates per year model, monthly cumulative updates with security patches, and additional cumulative updates and other updates, most requiring restarts, have been annoying to users and administrators alike.

While the new model won't remove the need to complete the installation of updates, it might help reduce work interruptions. Some users may dislike the cloud-based functionality of the system and the fact that it learns based on user behavior.

Microsoft has not really revealed how that is going to work and what data the system collects to function properly, or if there is an option to disable it.

Microsoft's previous attempts at tackling updates did not yield the desired results; internal testing along does not equate that external testing will yield the same positive results.

Skip ahead users may test the functionality in the coming weeks and months before it is launched for all users in the first feature update of 2019.

Now You: What is your take on Windows Update?

Ghacks needs you. You can find out how to support us here or support the site directly by becoming a Patreon. Thank you for being a Ghacks reader. The post Microsoft promises no more unexpected update reboots appeared first on gHacks Technology News.