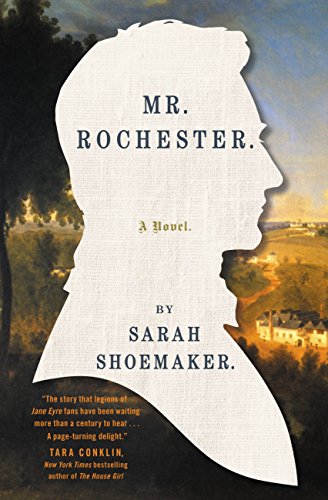 Jane Eyre is one of my favorite books – so much so that I collect copies as though I’m afraid that they will expire and vanish from the shelves. I have beautiful hardback copies that I keep for reading at home, battered thrift store copies that I give away with wild abandon, and a copy in my stash of emergency supplies in case of earthquake or zombie attack.

So I greet a book like Mr. Rochester, which retells the story from Mr. Rochester’s point of view, with mingled delight and trepidation. Turns out that Mr. Rochester is not as daring as some other adaptations, but it’s solid and engrossing.

Most of Mr. Rochester takes place prior to the events of Jane Eyre. We meet Rochester as a little boy, with a dead mother, a cold father, and an abusive older brother. His longing for affection and his desperation for the approval of his father inform all his future actions. He makes a lot of terrible decisions, but they are all in line with the way his character was formed in childhood. As time passes he makes new connections, but always these connections are severed unexpectedly and permanently, leaving Rochester more emotionally adrift than ever.

Rochester’s father sends him to Jamaica to manage an estate there. It is here that another of Rochester’s characteristics appears – he cares about a lot of things, but not enough to jeopardize his relationship with his father. For someone so very unconventional in Jane Eyre, Rochester is a completely conventional white sugar plantation owner in the Caribbean. This means that he is a slave owner, one who finds slavery degrading to himself but convenient from a financial standpoint.

Owning slaves is entirely consistent for someone of Rochester’s race, time, place, and class (all of the sugar plantations in Jamaica were run on slave labor, which was practiced in an even more brutal fashion than in the American South). Rochester finds slavery to be abhorrent, yet he practices it. In this book, owning slaves marks Rochester as a weak person who is willing to sacrifice his moral inclinations to please his father, even at the cost of other people’s lives and happiness. If Rochester were presented in a heroic light, or if his practice of slavery were glossed over, then this would be a deal-breaker. As it is, it shows how far he is willing to drift with the crowd – far from being a Byronic rebel, he does whatever he thinks will please his father and gain him approval from society. The consequences of slavery reverberate through the book, even after he leaves Jamaica.

Rochester meets and quickly marries Bertha Mason, in what is essentially an arranged marriage (by his father and hers). Here it is evident that Rochester is as influenced by the “isms” of his day as anyone else – he mentions over and over again that Bertha is “dark, but not as dark as he” and that he normally prefers “fair girls.” Despite liking “fair” women, Rochester is happy to make an exception for the mysterious Bertha, and he claims to enjoy the fact that she loves sex because he is “modern.” Indeed, he mentions this so often that it seems to hide some anxiety over her sexuality.

It quickly becomes obvious that Bertha and Rochester are not going to be a happy couple. She’s clearly very troubled, with mood swings and episodes of self-harm interspersed with periods of confusion and hallucination. Whatever mental health issues she has before her marriage are not helped by the gender and racial gaps between her and Rochester. She resents Rochester for calling her Bertha since she prefers to be called Antionetta (her middle name). She desperately wants to have a baby, but once the extent of her mental illness becomes visible Rochester won’t have sex with her for fear that the illness is hereditary. Rochester sees her fascination with local religion and her attachment to the female house slaves (two of whom are her half-sisters) as further signs of illness. This couple does not have even basic communication or coping skills, let alone access to marriage therapy or medication, and soon Bertha is confined to a suite of rooms while Rochester tries to figure out how he can take care of her forever without having to send her to a horrible asylum.

Mr. Rochester’s struggles with his daddy issues drive the first half of the book and the second is driven by his unwillingness to either abandon Bertha or resign himself to life as her husband. Rochester claims that she prefers small spaces (but if that’s true, why does she keep trying to get out of them?) and he sets her up in Thornfield first with people she trusts from Jamaica, and then with Grace Poole. He keeps her presence a secret, which complicates his romance with Jane.

One of the interesting things about the book is that Jane only speaks lines that she actually uses in Jane Eyre. Since Rochester is not privy to her inner thoughts, she is as mysterious to him as Bertha was during their courtship, although in every other respect Jane is completely different. It’s hard to tell why Rochester becomes so obsessed with Jane, except that she presents a surface of calm acceptance in contrast to the other people in his life who present him with chaos and rejection. Rochester’s treatment of Jane during her time as his governess is portrayed not as a series of romantic gestures but as the manipulative and callous actions of an insecure man.

In the feminist, post-colonial novel Wide Sargasso Sea by Jean Rhys, Rochester is portrayed as actively sadistic (the book is a searing indictment of racism, sexism, and colonialism; it’s not a romance, but a powerful and important book). In Mr. Rochester, Rochester always wants to do the right thing, but he’s too trapped by either circumstance or his own insecurities to do it. The exceptions are his care of Adele and of Bertha, but he is unable to extend emotional warmth towards Adele (to his credit, he recognizes this, and provides her with other companions who can be more emotionally attached to her) or to understand what might lie behind Bertha’s behavior. Rochester is most sympathetic when it comes to his attempts to provide Bertha with safety and at least a degree of comfort in a society which will not offer him any support. However, Rochester is an unreliable narrator when it comes to Bertha (see, for instance, his insistence that Bertha prefers small spaces despite the fact that she escapes these spaces whenever she can).

Readers who are attached to the idea of Mr. Rochester as a romantic hero will be disappointed by this book. Personally, I never have found him to be a romantic hero. I’ve always cared about Rochester only inasmuch as I care about Jane’s happiness. I liked the idea of this blustering, brooding, bossy guy being motivated by emotional insecurity and a desperate need to balance his responsibilities with personal happiness. It’s these very insecurities which attract Jane – on their first meeting she has to help him because he falls from his horse, and every time he leans on her (figuratively or literally) she becomes more enamored of him – while he sees her as the only steady source of affection and stability that he can rely upon.

The most satisfying moment is this quote, from the days after Jane leaves. He sees a portrait she made of herself, one which Jane deliberately, sternly, drew with the intention of highlighting every flaw. We know, from reading Jane Eyre, that Jane drew this picture to remind herself that she would never be loved by Rochester.

“Instead of the sprightly, intelligent passion that illuminated Jane’s face and cried out daily to my heart, here was a visage of dullness and despair. This was not my Jane. I wondered is this was how she felt: deceived, taken in, her loyalty mistreated. Oh God, I thought, what have I done to her? It is I, not Bertha, who has driven her away.”

Fear not, readers, for all ends just as Jane Eyre ends, right up to a slight variation on Jane’s most famous line. Those fans of Jane who dislike Rochester’s treatment of her in the original novel will be pleased to know that before Rochester can find a happy ending, he must confront his own failures and cruelties.

This book is an engrossing character study with even more melodrama than Jane Eyre itself. As a companion book to Jane Eyre, I enjoyed it, and while I think there are multiple ways to analyze the character, I couldn’t fault this author’s portrayal of a man who, by his own admission in Jane Eyre, tends to drift with events – he’s more reactive than active.

I’m not sure how much this book would appeal to people who haven’t read Jane Eyre, simply because Rochester is so passive in his youth, and Jane remains such a cipher when she appears. This is why rated the book a B- instead of a B. I think the sidelining of Jane is a fascinating literary device, but one that won’t work for readers who try this book as a standalone. As a companion piece to Jane Eyre, it deserves a solid B.