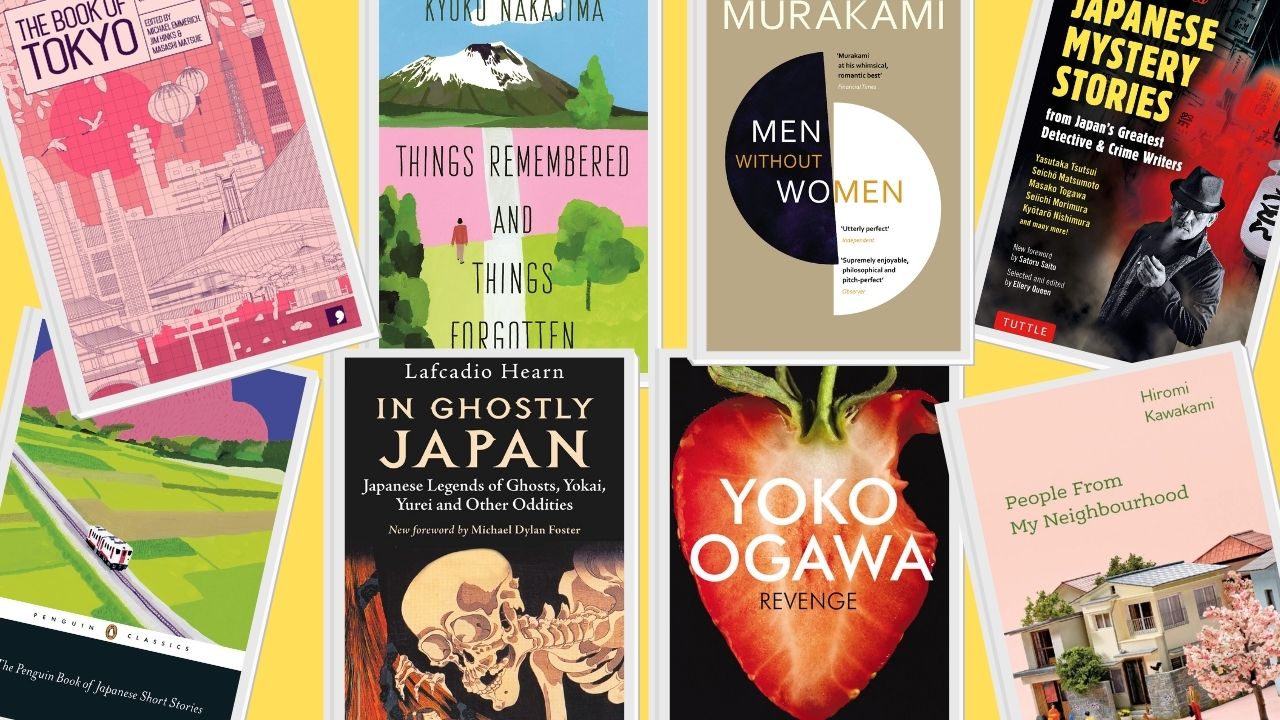 There is no end to the surrealism, the beauty, the variety found in Japanese literature. Japanese authors and stories expose the human heart; they travel through time and place and dreams. And the best of these tales can be found in Japanese short story collections.

Many of the best Japanese authors, known for their award-winning novels, have also penned some truly moving short story collections that are very much worth your time.

From the short comics of Junji Ito to the twisted tales of Yoko Ogawa, these are the best Japanese short story collections you can read right now. Stories of cities, people, ghosts, and stranger things besides.

Kyoko Nakajima is an author celebrated in Japan and beyond for her Naoki Prize-winning novel The Little House. She is also author of the to-be-treasured Japanese short story collection Things Remembered and Things Forgotten.

This is a collection of ten tales, all of which sensitively and deftly explore the relationship between time, history, place, and people. Moving across the spectrum of 20th Century Japanese history, these stories have a way of going straight for your heart.

In the titular story, a retired man and his wife visit the man’s older brother in a home. The older brother has succumbed to dementia and the younger brother relates to his wife tales of their youth during the American occupation of Japan post-World War II.

Another story begins with a woman admiring a selection of sewing machines at an antique store, before settling on one which the owner declares “doesn’t have a heart”. From here, we get the sewing machine’s life story, which shows snapshots of the lives of the people who have used and owned it over the decades.

The stories charm, soothe, serenade. They are calming, beautiful, warm tales of love and family and history. This is an essential Japanese short story collection that should be read by fans of Japanese literature and the short story medium alike.

Izumi Suzuki was a very special writer and person. Her colourful career included acting, modelling, and writing. This collection, Terminal Boredom includes a selection of speculative science fiction stories written by Suzuki later in her life.

While she was celebrated as a feminist in all aspects of her career, she really made her name as a writer, and these stories vividly show why that is. These are the best kinds of science fiction stories; ones which take real-world concerns and twist them into nightmare scenarios.

The opening story, for example, imagines a world in which women existed before men. Then, when men came about, they instilled the patriarchal system we all live in today, before then beginning to die out.

Many of these stories consider the effects of pollution and overpopulation. They centre on ordinary people living through strange scenarios like, for example, a government mandated cryogenic freezing of normal members of society in order to tackle the population crisis.

There is no Japanese author quite like Yoko Ogawa, and her short story collection Revenge is perfect evidence of that. These are eleven subtly interconnected tales that share specific and twisted themes, as the title implies.

These stories place ordinary people in extraordinary situations, always dark and chilling. They are not horror short stories, per se, but they are certainly dripping with dread.

Take the story Sewing for the Heart, in which a bag maker receives an unusual order from a young woman who requires a bag be made to carry her own heart. Or Afternoon in the Bakery: the tale of a woman who, every year, buys a cake for her son who died twelve years ago.

Every Japanese short story in this collection, like all of Ogawa’s books, excel at taking ordinary, human characters and stretching them by filling the world around them with odd, unexpected, sometimes nauseating things.

The Diving Pool by Yoko Ogawa

The author so nice she’s listed twice. And Yoko Ogawa really is that special. She is arguably this writer’s favourite Japanese author, and her collection The Diving Pool is a big reason for that.

While not strictly a Japanese short story collection, The Diving Pool is actually a book of three novellas, each around 50 pages in length. The titular story, The Diving Pool, is a quietly twisted tale of lust and suppressed emotion.

The protagonist of this story is a teenage girl whose Christian parents run an orphanage, and she has grown up with a foster brother from this orphanage. As she has developed, however, she has harbored an increasingly intense obsession with him.

As the title implies, she enjoys sneaking into the school pool and watching him dive, admiring his shape and form.

The second story, Pregnancy Diary, details the feelings and experiences of a young woman as she watches her sister (and sister’s husband) go through a pregnancy. It’s unnerving and discomfiting at times, as all three tales in this Japanese story story collection are.

People From My Neighbourhood by Hiromi Kawakami

Hiromi Kawakami is a big name in Japanese literature. Her novel Strange Weather in Tokyo was the first Japanese book in translation that this writer ever read, and it has remained a firm favourite for many years.

People From My Neighbourhood sees Kawakami flexing her surrealist and comedic muscles to wonderful effect. This is a tiny collection of even tinier tales that splendidly captures the eccentricities of ordinary people.

The titular neighbourhood of this book is nestled in an uncanny valley where anything can happen. Across roughly 120 pages, we are offered 36 short and amusing stories of around 2-5 pages apiece, each one ranging from slightly strange to excitedly deranged.

The subtle strangeness of this neighbourhood is hugely reminiscent of Royston Vasey in The League of Gentlemen: a place full of usual people who behave unusually or are subject to unusual circumstances, be they quietly supernatural, antisocial, or plainly bizarre.

A wonderfully quiet example is “The Hachiro Lottery”, in which a boy named Hachiro, who is the fifteenth child of a local family, is passed around from household to household because his family cannot afford to keep and feed him. It’s one story among many which teeter between unusual and unsettling.

Compare “The Hachiro Lottery”, which is only quietly odd, to “Grandpa Shadows”, the short story of a man with two shadows, one far more sinister than the other. The sinister shadow has a habit of attaching itself to another person for days at a time as a kind of curse.

Where the Wild Ladies Are by Aoko Matsuda

Aoko Matsuda’s Where the Wild Ladies Are offers sixteen incredibly human stories about the lives of modern-day Japanese women and men.

There is, quite simply, so much fun to be had with this Japanese short story collection. Many of the stories here provide us with an angle: that of a young woman or man in a strange or difficult situation.

From there it introduces a ghostly presence or a transformative power to befriend, overcome, or embrace.

These are thrilling short stories of ghosts and monsters in the everyday. They’re sometimes strange and jarring, especially given the juxtaposition of ape-like monsters and castle-haunting ghosts with modern suit-and-tie culture, but that is simply part of the fun that is to be gleaned from these tales.

Where the Wild Ladies Are never forgets how wonderfully weird the tales of yokai are, and it uses them to offer us a stream of witty, biting, eccentric, and dark tales of feminism in modern Japan.

Men Without Women by Haruki Murakami

Haruki Murakami, Japan’s most successful literary export, is well-known for writing elaborate and lengthy novels tinged with surrealism and recurring tropes. It’s very refreshing, here, to see him flex a few different muscles and write some engaging short stories instead.

Men Without Women makes its theme clear from its title: this is a Japanese short story collection that explores the relationship between men and women in the modern world.

Lonely men populate these seven stories, as do his usual cats, Beatles, and jazz bars. But the lost, broken, and vulnerable men of these stories show a very exposed side of Murakami and his writing. Not every story packs a punch but the ones that do are fantastically memorable.

While Shiver may be filled with comics rather than prose, it is still a Japanese short story collection through and through. This is also the finest sample of Junji Ito stories you can find. If you’ve had a morbid interest in Ito’s are and stories for a while, Shiver is where you should start.

The stories in this collection are all unique and separate from one another; they show off the depth and breadth of Ito’s artistic and narrative talents to an astonishing degree.

The best of these tales is, perhaps, Hanging Balloons. This short story imagines a world invaded by enormous balloons, each one with the face of a real person. Your balloon stalks you, a noose hanging from its bottom, and if it catches you, it hangs you.

Another story, The Long Dream, shows us a man in a hospital bed who lives entire lives every time he dreams. When he wakes, his body has aged as well, eventually turning him into an impossibly ancient, horrifyingly morphed thing.

These really are the best of Junji Ito, and Shiver is one of the finest Japanese short story collections you can read.

In Ghostly Japan by Lafcadio Hearn

Born in Greece, raised in Ireland and the US, Lafcadio Hearn was already middle-aged when he arrived in Japan. Once there, however, he married and put his journalism background to good use transcribing classic Japanese horror stories and folktales into English.

While these short ghost stories are not written by a Japanese author, they are all Japanese ghost stories in origin; Hearn simply made them accessible to English-language readers.

Japan has a deep history of folkloric terror. The ghosts and yokai of Japanese folklore are famed and beloved the world over, and much of that fame can be attributed to Hearn and this Japanese short story collection: In Ghostly Japan.

Ellery Queen was both the pseudonym and main character of American mystery writers Frederic Dannay and Manfred Bennington Lee. And here, the two have compiled and edited together their favourite Japanese mystery stories.

In here, you’ll find twelve Japanese mystery stories written by a host of award-winning crime writers, all loved and selected by the excellent Ellery Queen.

These are true classic mystery tales: locked rooms, impossible crimes, breadcrumb trails of clues. 20th Century Japan has a legacy of outstanding crime writing, and here are some of the best Japanese short story writers of that era.

The Book of Tokyo

Comma Press is an indie publisher that puts out consistently fantastic collections of literature in translation, from their Refugee Tales series to their “Reading the City” collections.

One of those city collections is The Book of Tokyo, a perfect introduction to the world of Japanese short story writing.

This collection features stories by some of the best authors of Japanese literature: Hiromi Kawakami, Banana Yoshimoto, Nao-Cola Yamazaki, and many more.

As the name suggests, these are all stories set in Tokyo that expose the city’s beating heart: the ways in which it glows and enriches, and how it frightens and oppresses. The world’s largest city is a multifaceted place, and we see it from every angle in this collection.

This beefy Japanese short story collection, edited by celebrated translator Jay Rubin (and with an introduction from Haruki Murakami), is a wonderful snapshot of Japan’s literary excellence.

Many of the authors featured in this collection represent the pinnacle of Japanese fiction: Yasunari Kawabata, Yuko Tsushima, Banana Yoshimoto, Ryunosuke Akutagawa. All of 20th Century Japan’s most celebrated writers in one short story collection!