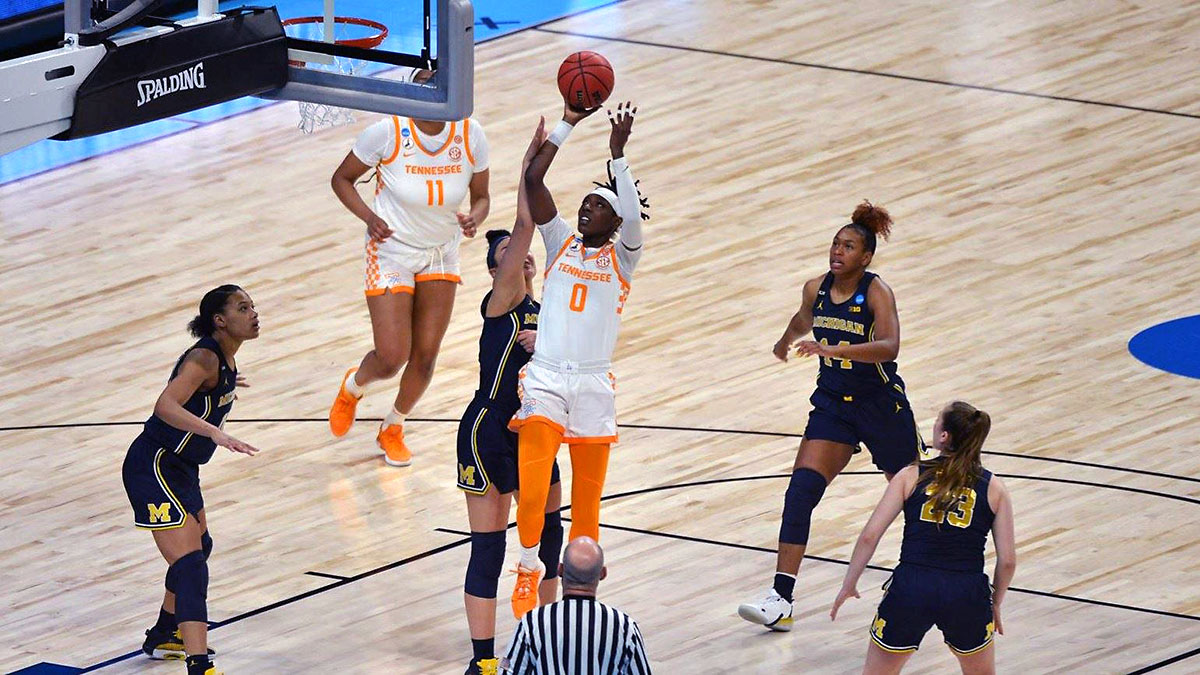 San Antonio, TX – No. 13/15 Tennessee women’s basketball team’s season came to an end in the second round of the NCAA Women’s Basketball Tournament on Tuesday, as the Lady Vols fell to No. 16/14 Michigan in the Alamodome, 70-55.

Senior Rennia Davis was the top scorer for No. 3 seed UT (17-8), finishing with 12 points. Junior Rae Burrell was close behind with 11, and senior Kasiyahna Kushkituah and sophomore Jordan Horston each turned in 10.

No. 6 seed Michigan (16-5) was led by Leigha Brown, who scored a game-high 23 points, and Naz Hillmon, who turned in a double-double with 19 points and 15 rebounds. Hailey Brown was also in double figures for the Wolverines with 14. 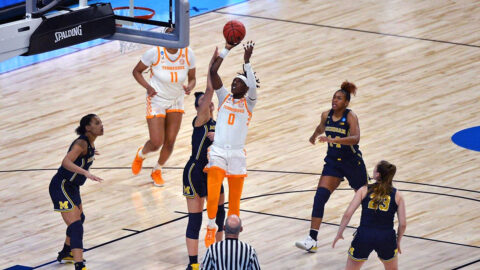 Tennessee Women’s Basketball junior Rennia Davis scored 12 points Tuesday in loss to Michigan in the second round of the NCAA Tournament. (UT Athletics)

Tennessee was first to score, going up 2-0 off a jumper by Davis. UT went on to lead by as many as four before back-to-back buckets by H. Brown and Hillman put UM up 7-6 in what would be the first of seven first-quarter lead changes. Kushkituah and Tamari Key combined for six points to close out the quarter, but the Wolverines managed seven, taking a 14-12 lead into the second.

Hillman opened the scoring in the second, stretching Michigan’s lead to four. Horston answered with a jumper, but five-straight points by L. Brown fueled a 5-2 run that put the Wolverines ahead by five at the 6:50 mark.  Horston cut it to three by the media break, but UM closed out the half with a 7-1 run to lead 28-19 at the intermission.

Michigan came out hot in the third, launching into a 12-2 run powered by Hillman and L. Brown to lead by 19 just over three minutes into the second half. Tennessee’s seniors rallied, scoring six quick points to cut the deficit to 13 a minute later. The teams traded buckets until Horston scored four points on consecutive possessions to cut it to 12, but Michigan stretched it back to 15, leading 50-35 at the end of the period.

Burrell got an easy bucket to start the fourth and went on to score nine-straight points, pulling the Lady Vols within 10 with 5:48 left in the game. Danielle Rauch scored her first points of the game with a trey on the next possession, however, and L. Brown followed it up with a fast-break layup to swing the momentum back toward the Wolverines and give them a 15-point lead with just over four minutes to play. Davis and Kushkituah rallied Tennessee back within 11, and a 3-pointer by Jordan Walker eventually cut it to nine, but Michigan was able to convert at the free-throw line, advancing to the Sweet Sixteen with a 70-55 victory.

Davis Leaves Her Mark
Senior Rennia Davis finished her career fourth all-time among Lady Vols in double-doubles with 39, trailing only Chamique Holdsclaw (57), Mercedes Russell (46) and Candace Parker (45). In her career, she ranks ninth in scoring (1,815) and points per game (15.4), 10th in rebounds (947) and sixth in rebounds per game at 8.03 rpg. Additionally, she finished sixth in free-throw percentage (.816), eighth in field goals attempted (1,477) and ninth in field goals made (696).

Kasi Strong In Postseason
Senior Kasiyahna Kushkituah appeared in four NCAA Tournament games during her career, reaching double figures in all of them with an average of 11.5 ppg. She posted career season highs in 2020-21 in nearly every statistical category, including points per game (6.8) and rebounds per game (6.0).