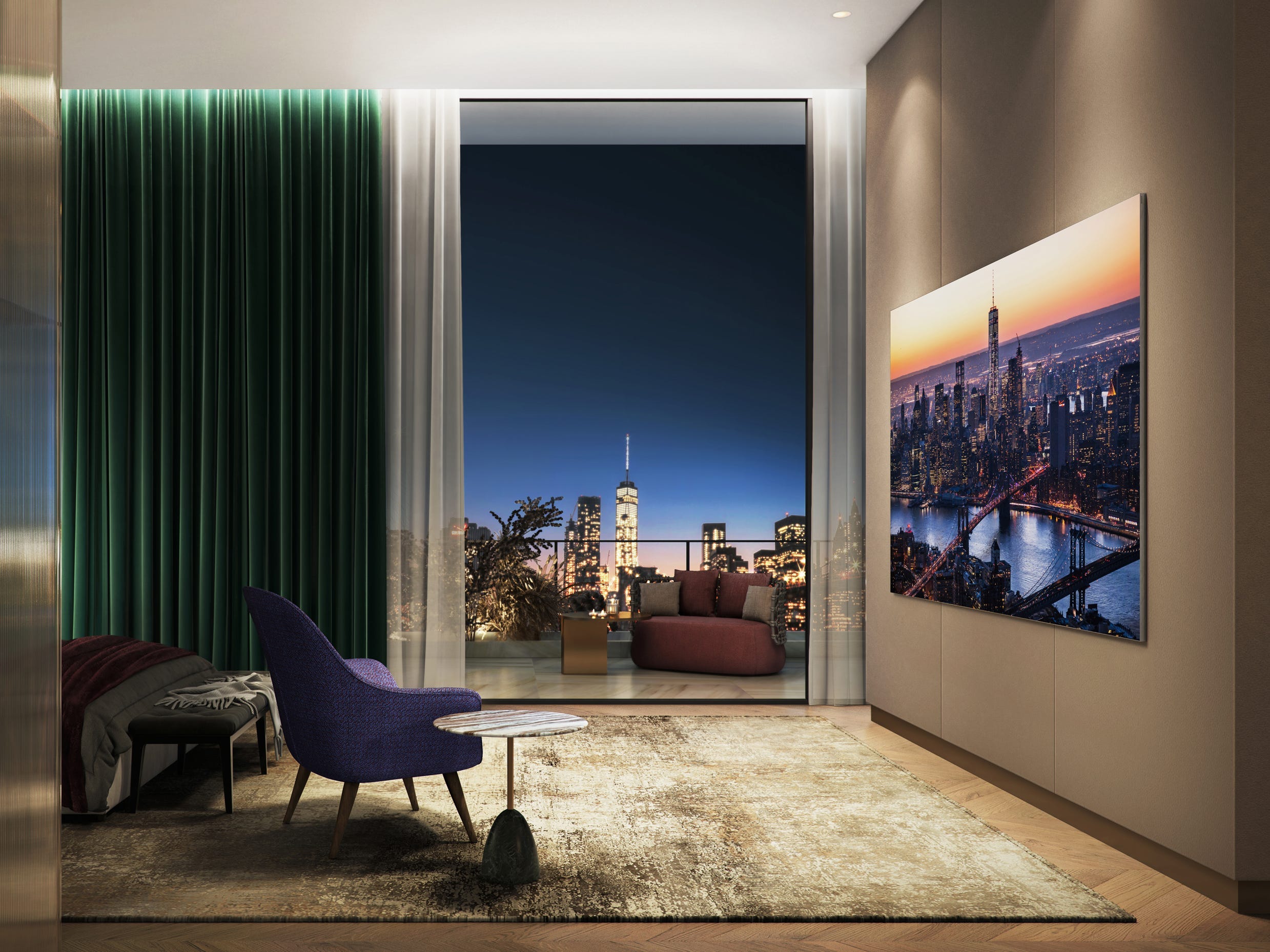 13 of the most unique products from CES 2022, the year's biggest tech show, from TV remotes charged by radio waves to roof shingle solar panels

Last week thousands of companies came together, in person and virtually, for CES 2022. They showcased their newest products, from gorgeous TVs to self-cleaning vacuums to color-changing cars.

While our editors weren't able to attend in person, we met virtually with dozens of companies and watched every major press conference to get a feel for the most promising products on display across all categories. We already highlighted some of our picks for the show's standout tech releases and most exciting home and health products, but CES was filled with other innovative items that deserve recognition.

Based on our research and expertise, we rounded up 13 unique products that you may have missed at the show. Though these intriguing items didn't quite make the cut or fit into our other roundups, they're all cool products that caught our eyes. Keep in mind, however, that some of our picks are more conceptual in nature, so a few might not end up hitting stores this year.

What is it: This is Razer's next model in its line of Enki gaming chairs, loaded with additional RGB lighting and a haptic motor.

What's cool: This haptic motor will vibrate along to more than 2,200 PC games, movies, and songs, similar to the rumble motors in game console controllers. Eventually, Razer says all PC games will support this feature, as will some of the most popular streaming services. I tested a very early version of this product at CES 2019, and I'm happy to see it prepping for release.

What's not: Razer hasn't described how this product will be powered, and it will likely need quite a bit to drive the haptic motors and the new lighting effects.

What is it: New smart action cameras that give cyclists a 360-degree view of their surroundings, plus a digital dashboard that's both a heads-up display and speedometer.

What's cool: It's like the Swiss Army knife of action cams. Although safety may not seem "cool" to someone who doesn't ride often, cyclists will appreciate Apeman's focus on mitigating the risks of riding.

What's not: The camera's stability and a cyclist's focus. It's hard to know how well the mount will keep a cam steady (or even attached), especially for mountain bikers. Also, will the digital dashboard draw too much attention away from the road?

What is it: A limited-edition Fossil Gen 6 smartwatch made with gaming brand Razer. The watch offers sleep and activity tracking and comes with two different watch bands (standard black and a Razer-themed black and green variety).

What's cool: This particular Razer-branded Fossil Gen 6 also happens to be one of the first with Google's revamped WearOS 3, which features app updates (and quick-switching between them), performance improvements, and a new health platform, among others. The watch tracks heart rate and blood oxygen levels, too. And did we mention the Razer branding? Because it's there, and it looks awesome for gamers.

What's not: This product is a limited capacity run of just 1,337 (referencing the gamer meme) units. It's too bad that the debut of Google's latest WearOS will be made in such limited supply.

Price and availability: The Razer x Fossil Gen 6 Smartwatch launches January 2022 for $330, and will be available in a limited quantity, via Fossil and Razer.  — Rick Stella, Health & Fitness Editor

What is it: This fully electric snowbike is far lighter than a traditional snowmobile, runs for three hours on a single charge, and can travel at speeds of up to 26 miles per hour.

What's cool: It's a 100% electric snowbike. What else is there to say? This thing looks incredibly fun to drive, and the fact it weighs roughly three times less than a snowmobile means it should be a lot easier to handle. It's also entirely electric and runs whisper quiet. That means cruising through the snow in silence while also doing your part to reduce fuel consumption — that's a win-win.

What's not: Its feasibility. Sure, it looks like a blast to drive, but is it really all that practical for anyone who doesn't live in an area with a ton of annual snowfall?

What is it: Invoxia's Smart Dog Collar is a wearable for medium-sized and large dogs that tracks them with GPS and measures their respiratory and heart rates.

What's cool: The collar uses radar and an algorithm to figure out a dog's vital signs. Invoxia says the collar is great for monitoring dogs on medication or recovering from surgery, but it also detects early signs of heart disease. You can also track down your missing pup and view their activity levels to ensure they're getting enough exercise.

What's not: Many pediatricians don't like health tracking devices for infants and children, and we wonder if veterinarians will see owners bringing in dogs because of false alarms. Also, the collar doesn't yet work for small dogs.

Price and availability: Invoxia goes on sale Summer 2022 for $99 with a subscription cost of $13 per month. — Jenny McGrath, Home Editor

What is it: The RainStick Shower recycles and cleans water, so it uses 80% less water and 80% less energy than a traditional shower.

What's cool: The RainStick collects the water it puts out, filters it through a mesh screen and treats it with UV light, then continues to spray. It repeats the process up to six times per shower. Because it has WiFi, you can track your water and electricity usage over time. Normally, showers use lower pressure to save water, but the RainStick should still deliver a powerful spray because it relies on a recycling method instead.

What's not: The price is prohibitively high for many people, and a professional needs to install the RainStick during a remodel. Also, there's an ongoing cost for the shower's cleaning system product, which you'll also have to buy through the company.

What is it: Timberline Solar Energy Shingles attach to your roof the same way regular shingles do, but they collect energy like a solar panel.

What's cool: GAF Energy, which makes the shingles, is part of GAF, a roofing company. Because the shingles install exactly like regular shingles, you don't need to hire an additional specialist if you're having a new roof put on. For GAF, the goal is to convince people who are already planning on replacing their roofs to go solar without adding extra time to the project.

Price and availability: Timberline's shingles are currently available in some US states, like Pennsylvania and Maryland, but the pricing varies per the professional installer. — Jenny McGrath, Home Editor

What is it: Sony's next version of its virtual reality headset made exclusively for its PlayStation 5 console.

What's cool: The first PlayStation VR (PS VR) on PS4 was already an engrossing experience with some excellent games. With a new, exclusive Horizon franchise game in the works, PS VR2 should hit the ground running. I'm also excited by the spec sheet, particularly 4K HDR resolution, eye tracking, and a vibration motor in the headset — none of which were in the previous model.

What's not: We have no idea what this thing looks like, how much it will cost, and when it will be released. All we know is that it's in development. The original cost almost as much as a PS4, but we hope the VR2 won't match PS5 prices.

What is it: Like last year's model, Samsung's latest TV remote charges through solar energy without batteries. This new model adds "RF harvesting," which lets it draw power from a router's radio waves.

What's cool: Samsung's remote is already "effective enough to run on electric lights, such as standard lightbulbs." USB-C charging is also still included, just in case you ever need to plug the remote in for immediate power. But the included radio wave-charging could eliminate wired charging outright.

What's not: The 2021 model worked well when I reviewed the Samsung QN90A TV last year, but it remains to be seen whether the new "RF harvesting" is useful at all.

Price and availability: The new Samsung Eco Remote will be included with the company's 2022 TVs. — Steven Cohen, Technology Editor

Price and availability: The Dame Com is available now via the Dame website for $125. — Rick Stella, Health & Fitness Editor

What is it: The compact USB-C charger delivers up to 100 watts of power, allowing it to charge everything from phones to laptops.

What's cool: It's possibly the smallest 100-watt charger to date. Using a battery technology called gallium nitride (GaN), it could be the only charger you ever need to pack in your bag.

What's not: The 100W power delivery rating only works with one device plugged in at a time. It has three ports, so charging more than one device at once will share that wattage across those devices.

What is it: A digital, tablet-like device that operates as a game board for both traditional board games and tabletop roleplaying games that's been in development since 2019 but has debuted for public purchase at CES 2022.

What's cool: There are many digital solutions for board games already, but this one interacts with miniatures and game pieces as they move across the Gameboard. We've never seen something as interactive in a widely available board-gaming device.

What's not: Major tabletop game makers haven't come out in support of Gameboard yet, but it seems to work regardless of their involvement. We're also hoping for official tabletop roleplaying game support for this product.

Price and availability: Gameboard is available for reservation now at $800 (or four $200 installments) and is set to launch in late 2022. — Joe Osborne, Senior Technology Editor

What is it: Micro LED displays are advanced screens that deliver big improvements over any TV you'll find in stores right now. They're also modular in design, so manufacturers can allow users to add, remove, or shift pieces of the display for different sizes and shapes.

What's cool: Samsung has shown off Micro LED TVs at CES for years, and they never fail to impress. I saw a 110-inch model last year, and it's still one of the most incredible displays I've ever laid eyes on. Micro LED has the potential to combine everything we love about other display technologies while minimizing all their weaknesses.

What's not: The biggest hurdle for Micro LED tech right now is price. The TVs are prohibitively expensive and are currently only available in giant screen sizes. And, despite their incredible contrast and brightness, their modular design can cause seams in the display to be visible.

Price and availability: Some ridiculously expensive Micro LED options are already available in luxury and commercial markets. Samsung says a new 89-inch model will be released in 2022 but pricing hasn't been confirmed. For reference, the company's 110-inch model launched for about $156,000 last year. — Steven Cohen, Technology Editor

13 of the most unique products from CES 2022, the year's biggest tech show, from TV remotes charged by radio waves to roof shingle solar panels