Austin, TX – The No. 13/15 Tennessee Lady Vols basketball team (16-7, 9-4 SEC) remains perfect in NCAA Tournament participation, earning the program’s 39th-straight invitation to the “Big Dance.” UT is the only school to appear in every women’s tourney.

The UT Lady Vols were selected as a No. 3 seed in the River Walk Region and will meet No. 14 seed Middle Tennessee (17-7) in the NCAA First Round on Sunday. Tip-off is slated for 2:00pm ET (1:00pm CT) at the Frank Erwin Center on the University of Texas campus. The game will be televised by ABC and carried by the Lady Vol Radio Network. 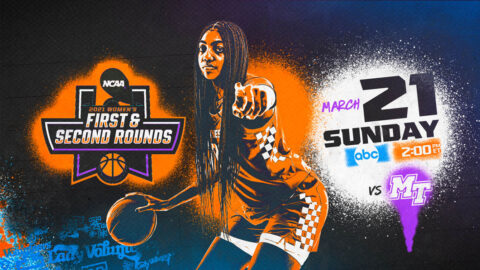 Tennessee Women’s Basketball takes on Middle Tennessee in the First Round of the NCAA Tournament, Sunday. (UT Athletics)

The winner of those games will advance to the NCAA Second Round and play on Tuesday. Tip time, TV info. and location are to be determined.

Ryan Ruocco (play-by-play), Rebecca Lobo (analyst), and Holly Rowe (reporter) will have the call for ABC.

All of the games included in the ESPN package (ESPN, ESPN2, ESPNU) will be available through WatchESPN, accessible online at WatchESPN.com, on smartphones and tablets via the WatchESPN app, and streamed on televisions through Amazon Fire TV, Apple TV, Chromecast, Roku, Xbox 360 or Xbox One to fans who receive their video subscription from an affiliated provider.

The contest also can be heard on Lady Vol Network radio stations and by an audio stream, with Mickey Dearstone behind the microphone. Now calling the action for his 22nd season, Dearstone is joined by studio host Bobby Rader.

She is the first to do so at her alma mater.

Harper also is one of only 11 coaches to take three different schools to the NCAA Tourney.

This marks the 13th postseason appearance of Harper’s head coaching career, including her sixth in the NCAA Tournament.

As mentioned, the Lady Vols are making their 39th appearance in the NCAA Women’s Basketball Championship, and UT is the only program to appear in all 39 tournaments.

Tennessee was an at-large qualifier for the NCAA Tournament field, finishing third in the Southeastern Conference regular season for the second-straight season and bowing out in the semifinal round of the league tourney to No. 2 seed South Carolina, the eventual champion.

Tennessee is second behind UConn in winning percentage at .806 in tourney play.

UT is 0-0 in NCAA play under Kellie Harper, making its first appearance in 2021 with her at the helm after the tourney was canceled a year ago due to the coronavirus (COVID-19) global health pandemic.

UT has advanced to the NCAA regional round on 34 occasions, posting a 28-6 record in the Sweet 16.

UT has made the Elite Eight 28 times and in five of the past nine tournaments, posting an 18-10 record in that round.

Tennessee has finished second in the nation five times and third on five more occasions.

All told, UT has played 87 different opponents during all rounds of the NCAA Tournament, including Middle Tennessee.

Tennessee is making its 39th appearance in the NCAA First/Second Rounds, and it owns a 58-4 record during games played in those rounds.

Rennia Davis (3), Kasiyahna Kushkituah (2) and Rae Burrell (1) combine to give the Lady Vols only six total games of NCAA experience and three starts.

Davis had a double-double of 21 points and 10 rebounds in 2019 vs. UCLA in her last NCAA contest.

In that 2018 contest between UT and Liberty, the Flames’ Keyen Green scored 10 points on 4-of-4 shooting vs. Tennessee. She’s now a Lady Vol (grad. transfer) and is sitting out the season due to injury.

Kellie Harper, who is making her first tourney visit with Tennessee, has made most of her previous trips with mid-majors and/or lower-seeded teams.

She enters the 2021 event with easily her highest-seeded squad.

During the 2018-19 NCAA Tournament, Harper piloted #11 seed Missouri State to the Sweet 16, beating #6 seed DePaul and #3 seed Iowa State along the way before falling to #2 seed Stanford by nine en route to 2019 Kay Yow National Coach of the Year acclaim.

While this may be Kellie Harper‘s first NCAA Tournament as coach at Tennessee, this isn’t her staff’s first rodeo.

UT assistant coach Jon Harper was on his spouse’s staff in all of those previous NCAA appearances.

Assistant coach Jennifer Sullivan was part of the Missouri State staff during the 2016 NCAA Tourney appearance.

UT director of recruiting operations Jessica Jackson was recruiting director and assistant coach on Harper’s staff at Missouri State during the Bears’ 2019 NCAA Tournament run and played for the Harpers on the 2009 Western Carolina NCAA team.

Tyler Watson, the director of women’s basketball sports performance, also was on Harper’s staff at Missouri State during the 2019 run.

While associate director of sports medicine Casi Dailey wasn’t in Raleigh for NC State’s 2010 NCAA appearance, she did spend eight years on Harper’s staff at NC State from 2012-20.

Harper NCAA Record As A Student-Athlete

Kellie (Jolly) Harper was 21-1 in the NCAA Tournament has a student-athlete at Tennessee.

She scored 20 points in the 1998 title game vs. Louisiana Tech, hitting seven of 10 field goal attempts. Her 4-of-5 effort from beyond the arc is still tied as a championship game record.

Her 1998 effort earned her a spot on the Final Four All-Tournament Team.

No. #14/16 Tennessee, the No. 3 seed, outscored second-seeded #7/7 South Carolina 13-8 in the fourth quarter, but couldn’t overcome a 29-point first quarter by the No. 2 seed Gamecocks, falling 67-52 in the semifinals of the SEC Tournament at Bon Secours Wellness Arena on March 6th.

Redshirt-junior Jordan Walker and sophomore Jordan Horston were the high scorers for UT (16-7), each finishing with 11 points. Senior Rennia Davis and sophomore Tamari Key were the top rebounders for the Big Orange, grabbing six apiece.

South Carolina (21-4) was paced by Zia Cooke, who had a game-high 17 points and four rebounds. Aliyah Boston was close behind, posting a double-double with 15 points and 11 rebounds, and Destanni Henderson put up 13 points.

Tennessee enters Sunday’s game with a 21-0 series record vs. Middle Tennessee, including 4-0 at neutral sites and 1-0 in the NCAA Tournament.

The programs met on March 17th, 1984, in the NCAA Tournament in Knoxville, with the Big Orange taking a 70-52 first-round victory. That’s the only previous NCAA meeting between the women’s programs.

The last regular-season meeting occurred in 2013 in Murfreesboro, with UT coming from behind to win, 67-57.

Kellie Harper is 2-3 all-time vs. Middle Tennessee and Rick Insell in her head coaching career, but this marks the first meeting during her UT tenure.

She was 2-1 vs. MT while at Western Carolina and 0-2 while at Missouri State, falling to the Lady Raiders during the 2015-16 and 2016-17 seasons in away and home games, respectively, in the most recent meetings.

This marks the 14th straight time these teams have met with the UT Lady Vols ranked in the AP Poll.

The Lady Vols are 101-27 all-time vs. teams from Conference USA.

Tennessee has a 251-61-1 all-time record vs. schools from the Volunteer State.

The Lady Vols are 2-0 in 2020-21 vs. in-state foes, with wins over ETSU and Lipscomb, with two games on the schedule vs. Vanderbilt (home and away) canceled.

While at SCHS, Rick Insell had five of his players sign with Pat Summitt at Tennessee, including Abby and Amanda Canon, Alex Fuller, Michelle Johnson, and Tiffany Woosley.

Conswella (Sparrow) Johnson, who played for Rick Insell at SCHS, ended up signing with Joe Ciampi at Auburn (1997-2000), but her son Keon Johnson is a freshman on the Tennessee men’s basketball team. He is projected to be taken in the first round of the 2021 NBA Draft.

Kellie and Jon Harper were on the women’s hoops staff at Auburn when Sparrow played there.

About the Middle Tennessee Lady Raiders

The Lady Raiders (17-7) swept the Conference USA regular season East and tournament titles this season. Middle Tennessee is led by C-USA Player of the Year Anastasia Hayes, who averaged 9.3 ppg. at Tennessee in 2017-18 before departing.

Hayes was part of the nation’s No. 1 recruiting class  at UT along with current Lady Vols Rennia Davis and Kasiyahna Kushkituah as well as Evina Westbrook (now at UConn).

Middle Tennessee (17-7) captured the Conference USA Championship with a riveting 68-65 win against defending champion Rice at the Ford Center at The Star in Frisco, Texas, on March 13th.

It marked the Lady Raiders’ third C-USA championship in four title game appearances and their first since 2016.

Tournament MVP Anastasia Hayes scored 10 of her 17 points in the pivotal fourth quarter to curtail Rice’s comeback attempt. Hayes stuffed the stat sheet, adding seven assists, six rebounds, and two steals to her 17-point effort. The C-USA Player of the Year averaged 24.7 points, 6.3 assists and 2.0 steals in the three wins, while also shooting 60 percent (31-of-52).

Tennessee opened the 2013-14 season at Middle Tennessee the last time these teams met, defeating the Lady Raiders, 67-57, at the Murphy Center in Murfreesboro on November 8th, 2013.

Ariel Massengale tossed in 12, followed by Mercedes Russell with 11 and Andraya Carter with 10 to pace Tennessee.

Ebony Rowe led MT and all scorers with 21 points and added 16 rebounds, while Shanice Cason contributed a 10-point, 10-board double-double.