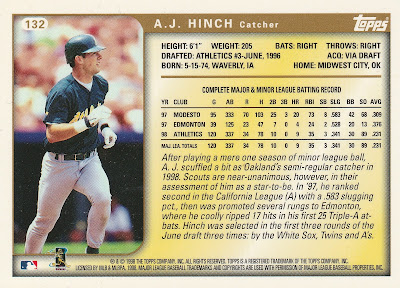 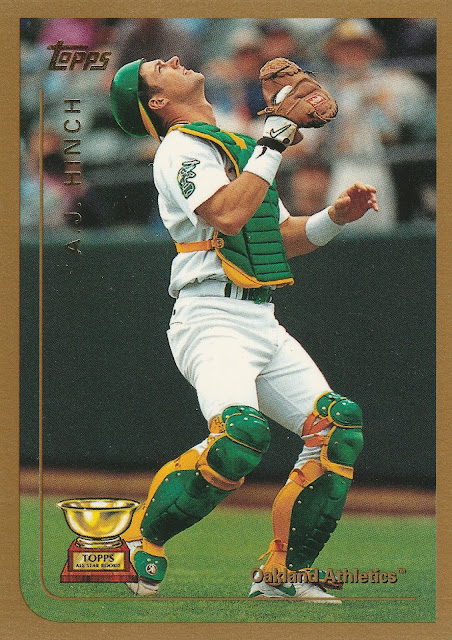 A.J. Hinch had all the trappings of a future star - he was a high school superstar, an Olympian, and a college standout. combine that with a quick run through the minors and you get a player ripe for Topps All-Star Rookie status. Of course, it didn't hurt that he was the only rookie catcher to play over 100 games in 1998.

The Oakland A's in 1998 were still looking for their next franchise catcher. Long-time catcher Terry Steinbach, a holdover from the great A's teams of the late 80s, left the team to play for his hometown Twins in 1997. Without him, the A's split their catching duties between 29 year old Brent Mayne, 28 year old switch hitter George Williams, and Izzy Molina (no relation). Williams actually had a pretty good season, with an OPS+ of 111 and an OBP of .397. Of course, Moneyball was still a few seasons away, so the A's were looking for power from the catching position. A.J. Hinch was poised to be the man for the job after a hot season in the minors, in which he hit 24 homers across two levels.
For the big league club in 1998, Hinch struggled to adjust to major league stuff. He did have 9 homers and added 10 doubles, but slugged just .341 for the season. The big issue, which had not been hinted at in his amateur or minor league career, were the strikeouts. Hinch whiffed 89 times in that first year, good for a K rate of 22.8%. He displayed some decent skills behind the plate, throwing out 35 base stealers and committing just 9 errors in 120 games. 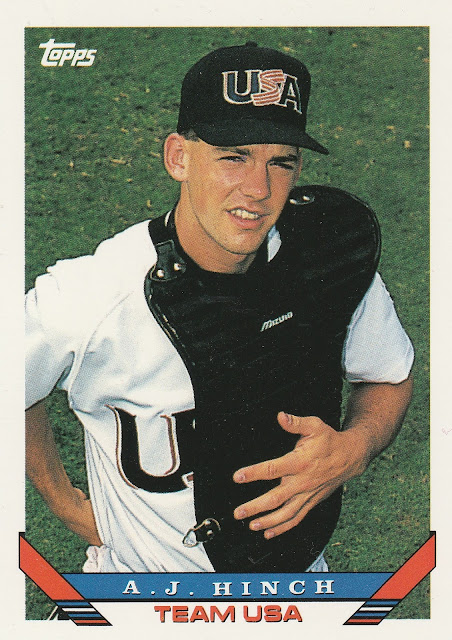 Hinch came of age in Oklahoma, winning the 1992 Gatorade High School Player of the Year. He had starred on the Junior Team USA squad in 1991 and 1992, and he would join the big boys for Team USA in the 1996 Olympics, where he shared in a Bronze medal finish. He was drafted out of high school by the White Sox, but opted instead to retain amateur status with Team USA and his college of choice, Stanford. He stayed in school all 4 years, despite being drafted again following his Junior year, when was named the PAC-10 player of the Year. He would repeat the feat as a Senior, before being drafted a third time, now by the Oakland A's in the 3rd round of the June MLB draft. 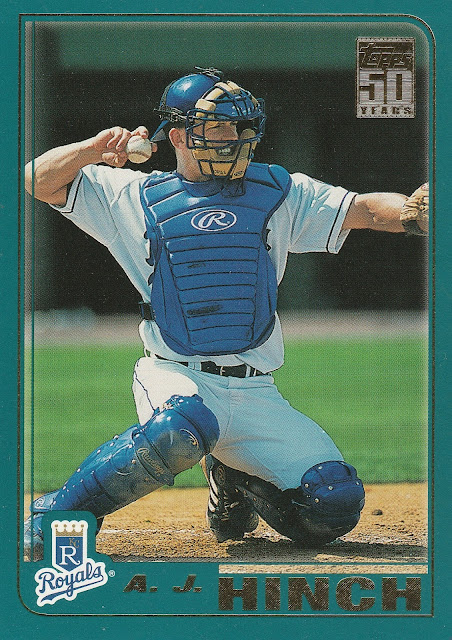 His rookie season would be his best in terms of games played and several offensive categories. In 2000, Hinch was sent back to Triple-A to try to right the ship after a rough 1999. He was part of the 3 team deal in the 2001 off-season that sent Johnny Damon to Oakland and Ben Grieve to Tampa Bay. Hinch landed in Kansas City, where he would serve as Brent Mayne's backup - the same Brent Mayne he succeeded in Oakland back in 1998. Hinch would bounce around the league for a couple years as a backup in Detroit and Philadelphia, playing a majority of his games in Triple-A Scranton Wilkes-Barre. He retired following the 2005 season, but had already started making plans for his next steps as early as 2003 when he attended the Winter Meetings and met with several General Managers.
After his retirement, he served with the Diamondbacks as a minor league director of operations, then as the team's director of player development. In 2009, he was given the opportunity to be the team's manager. This learning experience would lead to a scouting gig and assistant general Manager role with the Padres, before the now controversial tenure as manager of the Houston Astros. Taking over for Bo Porter in 2014, Hinch inherited a team that was expected to lose, but more importantly, expected to learn how to win. The team exceeded expectations and made it to the post season for the first time in a decade with a Wild Card berth. The Astros remained competitive in the next few years while gaining experience. The good news is that they did learn to win, the bad news is how they won. The Astros won the 2017 World Series, but later were discovered to have done so with the benefit of an elaborate system for intercepting and relaying the opponent's pitches. For his part, Hinch did express regret and was the first to publicly apologize for the scandal. He listed as his biggest regret that he did not do more to curb the sign stealing when he first became aware of it.
Hinch has been given another chance to show his integrity - following the retirement of Ron Gardenhire, Hinch was hired to be the manager of the Detroit Tigers for the 2021 season.
Do you have any A.J. Hinch memories? I'd love to read them in the comments below. Uh... please be civil!
Thanks for reading!
Source: subjectiveandarbitrary