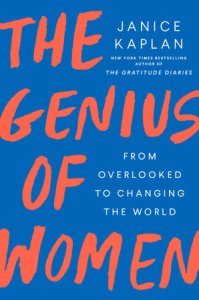 “It’s Never Events That Make Us Happy or Not—But Our Own Attitudes Toward Them.”

Janice Kaplan is the author of fourteen popular books, including the New York Times bestseller, The Gratitude Diaries, and she has a new book  called The Genius of Women: From Overlooked to Changing the World. She was the editor-in-chief of Parade magazine, which at the time reached 70 million people each week, and she spent many years producing network television specials. Her books have been translated around the world, and she speaks about gratitude and genius at events across the country.

I was curious to hear what she had to say about happiness, habits, and productivity.

Janice: Ever since I wrote The Gratitude Diaries, I’ve learned how important it is to stop myself when I’m frustrated and take a moment to reframe the situation. After spending a year living more gratefully, I know that it’s never events that make us happy or not—but our own attitudes toward them. Being more grateful has had a huge effect on my marriage. No relationship (or person) is perfect, and we often spend more time thinking about what’s wrong than what’s right. During that gratitude year, I got in the habit of thanking my husband for little things. I started appreciating his many kindnesses rather than criticizing the small things that he might do wrong. Most of us are much better at criticizing than appreciating. Turn that around and you have a great formula for happiness.

What’s something you know now about happiness that you didn’t know when you were 18 years old?

When we’re young, we tend to forget how strongly influenced we are by expectations and implicit biases. In researching my new book The Genius of Women, I realized how often women’s achievements are ignored or overlooked—often because people just can’t imagine a woman would have discovered nuclear fission or decoded secret Nazi messages. Yes, women did both—and much more. If our happiness and sense of self is dependent only on how others see us, we can start to believe the stories that are distorted or wrong. So many of the women geniuses I interviewed were able to ignore barriers and believe in themselves. That’s a great start of happiness—and success.

You’ve done fascinating research. What has surprised or intrigued you—or your readers—most?

I was surprised to realize just how deep and affecting our biases may be. We think we are looking at the world with clear eyes—but then we discover that, for example, we like a piece of work only because of who painted it. One of my favorite stories involves a painting by the great seventeenth century artist Franz Hals that hung in the Louvre and was hailed as one of his most important works. Then something unexpected happened. Experts discovered that the painting was really by a contemporary of his named Judith Leyster. There were lawsuits and embarrassment all around. A painting praised for two centuries as a masterpiece was suddenly worthless because it was by . . . a woman. Readers of The Genius of Women tell me how they have started to rethink their own views and expectations of what is good, what matters, what makes us satisfied.

Is there a particular quotation that has struck you as particularly insightful?

I interviewed about 25 women geniuses in the U.S. and U.K. for The Genius of Women and most were extraordinarily inspiring. I was particularly taken by Dr. Frances Arnold, who recently won the Nobel Prize in chemistry. She is sophisticated, attractive, and very warm—she even insisted that I call her Frances. But she also has a calm confidence that can be life-changing. I asked her how she managed to keep doing her breakthrough research early on when women weren’t welcome in most labs, and established scientists told her that her approach was all wrong. “I just knew I was right,” she told me. “I did not doubt myself.”

Being strong enough to believe in yourself in any circumstances doesn’t mean you will win a Nobel Prize. But having that inner strength gives you a better chance of success no matter what your field.  Dr. Arnold has had many challenges in her life, but she told me how much she believes in gratitude and looking for the good. Positivity in all things can make a huge difference. “I would like to see women face the world in a powerful and positive way, not a negative and fearful one,” she said. I think that’s a motto we can all put up on our walls and look at every day.

Has a book ever changed your life—if so, which one and why?

As a freshman in college, I read Henry James’ Portrait of a Lady, and I was mesmerized by the heroine Isabel Archer. Her story struck me with enormous power—making me realize how difficult it is for a free-spirited woman to keep her independence and survive in a conventional society that wants to limit women’s possibilities. I think that book forever changed my understanding of how difficult it is for any of us—but particularly women—to remain original and strong. And it inspired me to try my hardest to ignore the barriers that are always in our way.

In your field, is there a common misperception or incorrect assumption that you’d like to correct?

The Genius of Women is all about changing the perceptions of women. We tell girls that they can do anything, but every message society sends nudges them away from succeeding, soaring, and being original. I hope the book will encourage parents to realize the huge disservice they may be doing their daughters by not fighting harder against stereotypes—and will encourage women in all fields and at all levels to stand firm for who they are and what they can do.

“It’s Never Events That Make Us Happy or Not—But Our Own Attitudes Toward Them.”