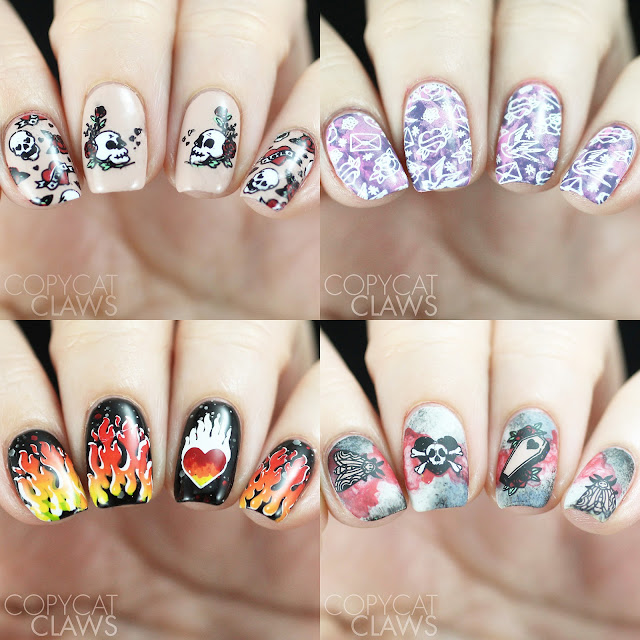 Hey there!  Since today is Valentine's Day, it is more than appropriate that I get a blog post up about last month's Maniology Mani X Me box seeing as it's theme was Heartbreaker.  I normally try to get these done while the box is still available but I normally only get a few days before the month switches over on the 23rd so it wasn't possible this time around.  I received February's box today if I can find some time to play with it this weekend I'll definitely get a look at it posted next week.  Even if January's box is gone, hopefully someone can find some inspiration with the looks I've create with it.  In case you're unaware, the Mani X Me box is a monthly subscription box (though it can also be purchased on a month to month basis) with 2 exclusive Maniology stamping plates, 2 polishes and an extra.  This month's "extra" was so helpful that I hope they start selling them on their own because I'd definitely buy some.  If you're interested in the box and want to try it out, using the code COPY10 will give you $5 off your first one.  Now let's take a look... 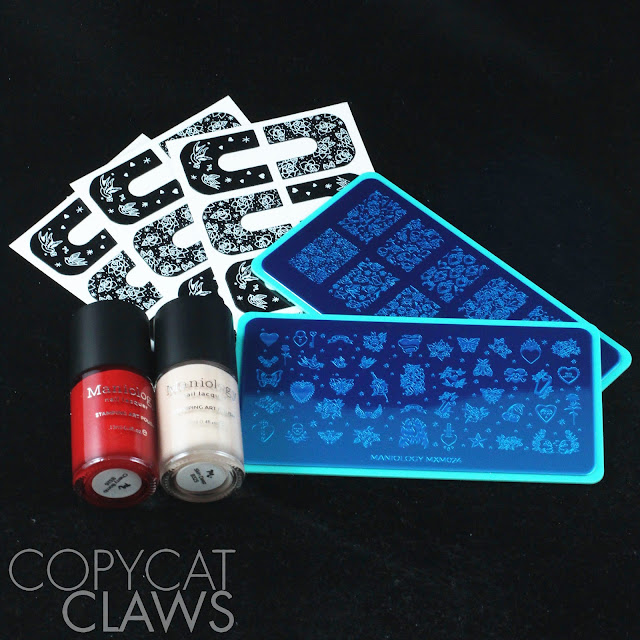 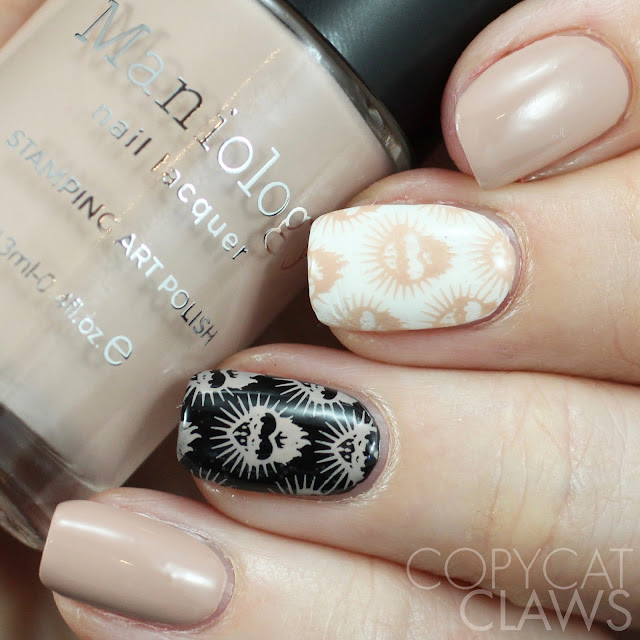 The first polish is Skin Deep, a nude creme that stamps beautifully over both black and white.  Swatches show two coats plus top coat.
Cherry Bomb 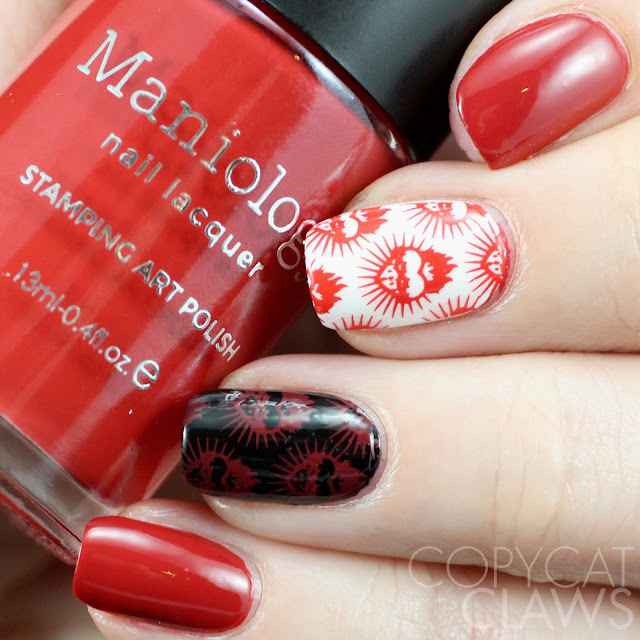 Cherry Bomb is the second polish.  I love this one since it's just a perfect red and it's super opaque so it's great for nail art.  It doesn't stamp super visibly over black but reds that stamp over black are practically unicorns.  Swatch fingers show two coats plus top coat.
MXM023 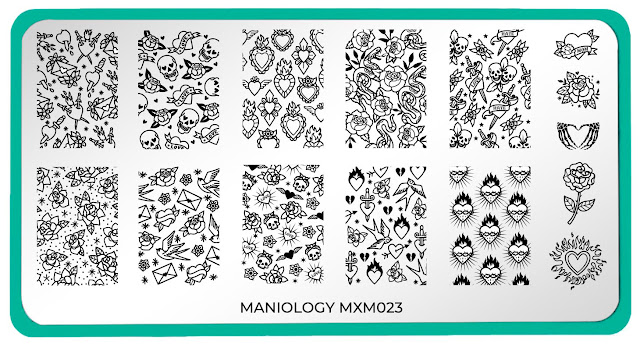 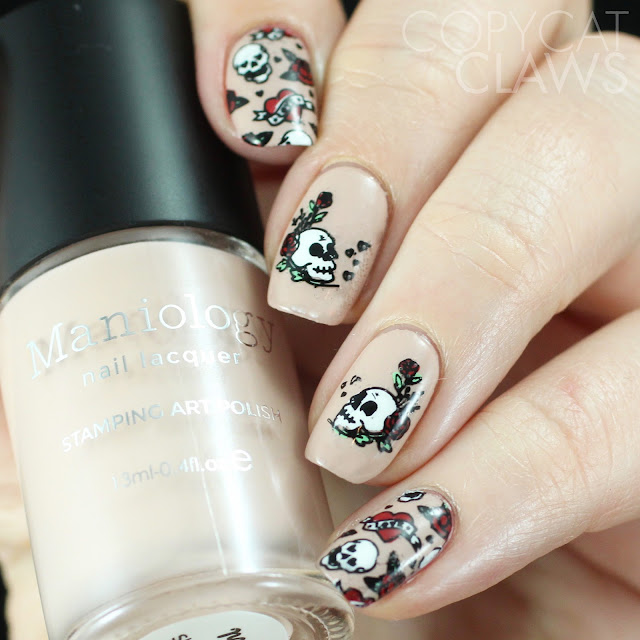 If you follow the Mani X Me Instagram tag I'm sure you've seen a lot of looks like this.  But this images almost demand this mani.  I actually did it twice since the first one was sooooo bubbly.  It's reverse stamping over Skin Deep with images from both MXM023 and 024 stamped with Straight Up Black and filled with Bam White, Cherry Bomb and Ducky. 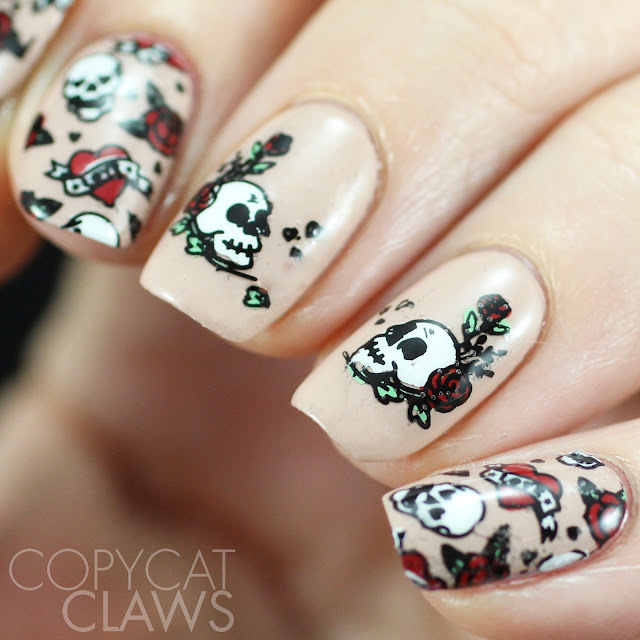 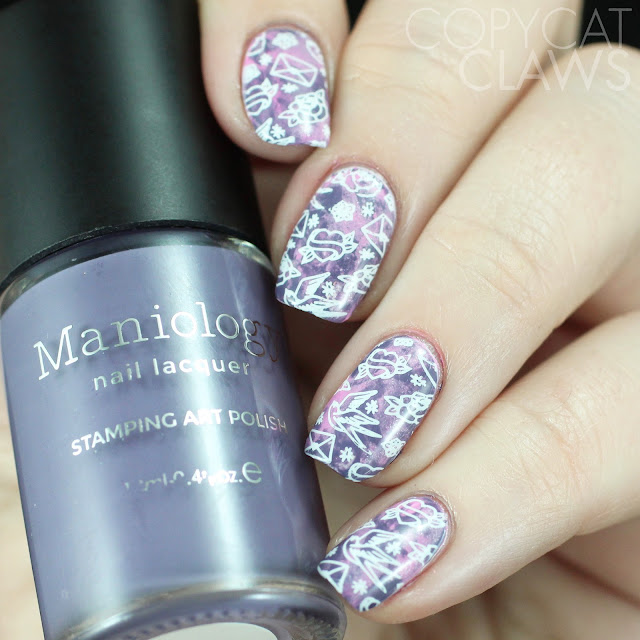 This one is a smooshy marble using Maniology's Sweet and Sassy stamped with Bam White.  You can see almost a little step-by-step a bit further down this post. 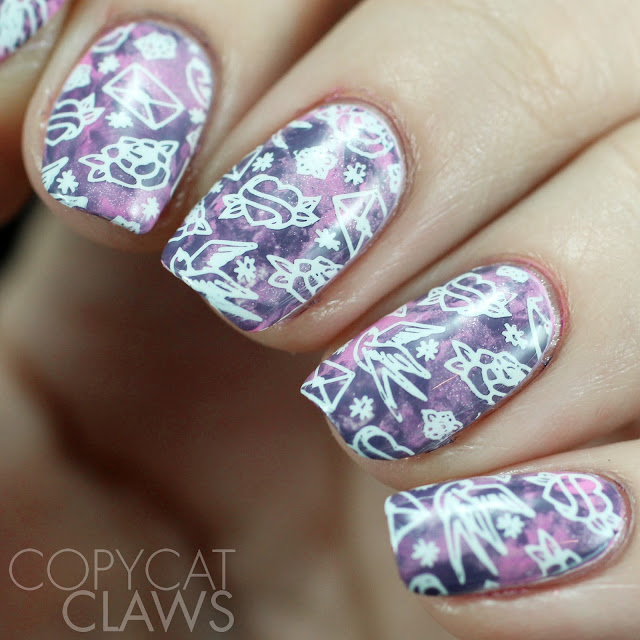 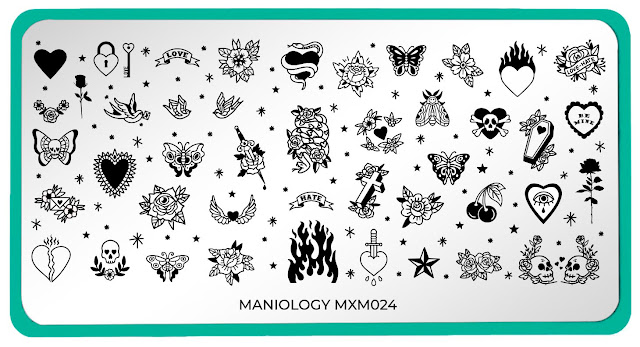 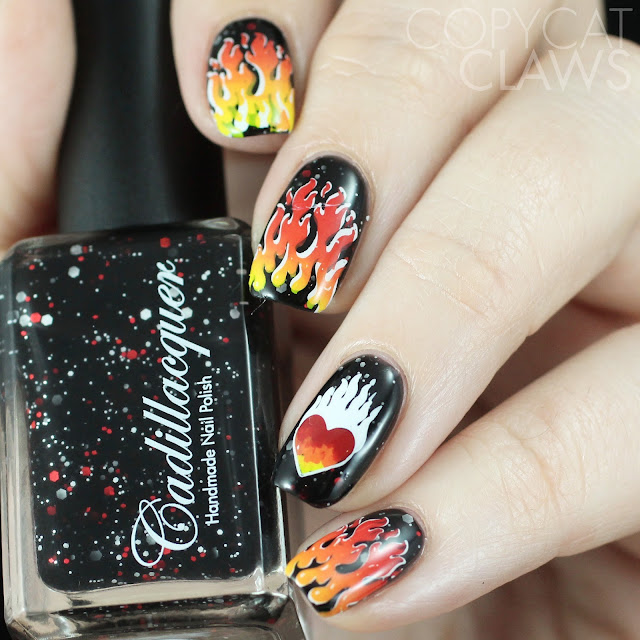 MXM024 is mostly smaller individual retro tattoo-inspired images.  For these I used a base of Cadillacquer Stagman.  For the fire I stamped Bam White first and then gradient stamped Cherry Bomb, Orange Burst and Maui Gold.  The accent nail was stamped with Bam White and then filled with the same before applying to the nail. 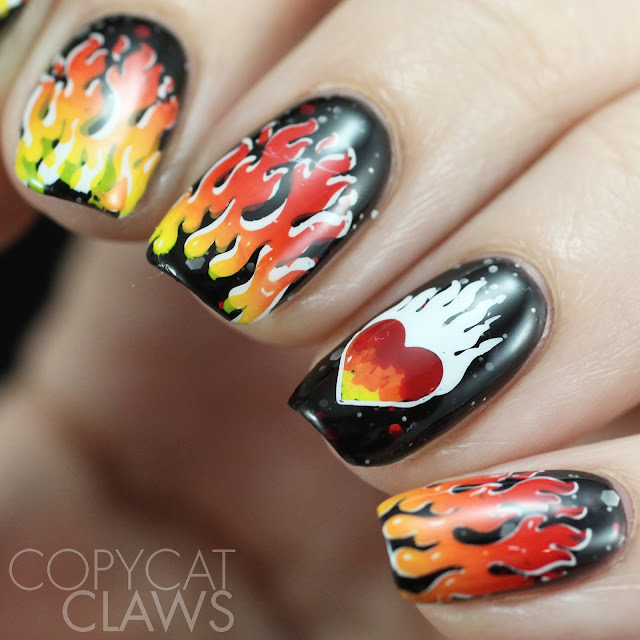 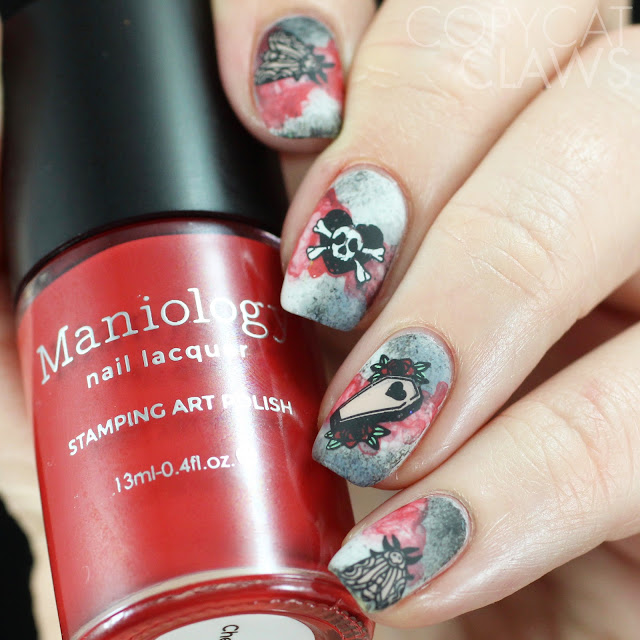 My final mani looks way more Halloween than Valentine's but I was watching Dracula on Netflix when I was using this box and the intro inspired me.  I used Cirque Colors Hatch as a base and then sponged on a bit of black and grey (L'Oreal Greycian Goddess and Sinful Colors Black On Black).  Then I thinned out Cherry Bomb with acetone and applied it to kind of look like smoke (or blood).  The stamping is, again, Straight Up Black filled with Skin Deep, Bam White, Cherry Bomb and Ducky.  This one was finished with OPI matte top coat. 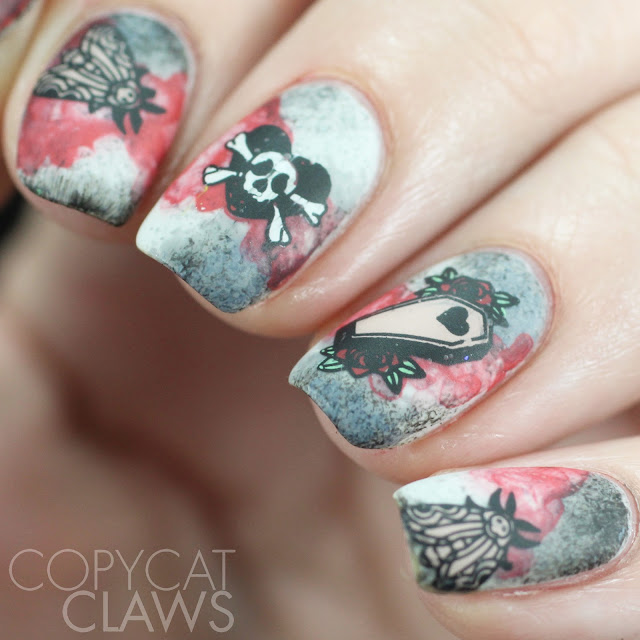 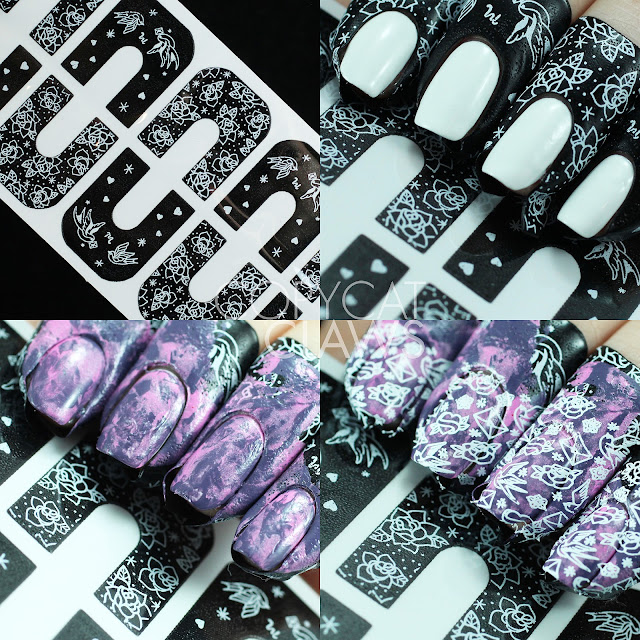 And lastly, the "extra".  These are stretchy cuticle guard that are great for any kind of messy nail art.  There were 3 sheets of 10 included but each one could be re-used for multiple nails if you wanted.  They were super easy to apply.  I love liquid cuticle guard but these were a special treat since I didn't have to worry about my fingers touching, sticking to each other and ruining the guard.  After I did my base for the smooshy marble, I applied them and just left them on for every step until top coat.  Amazing!
$20-25/box (depending on subscription length)
Available at Maniology
Use code COPY10 to save $5 off your first box
Facebook/Instagram
'Til next time...