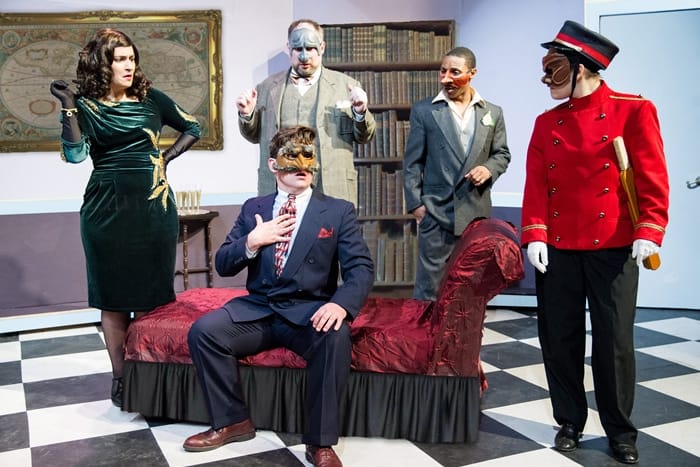 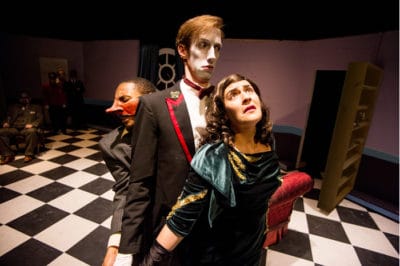 The Faction of Fools are at it again. After a decade adapting titles that one wouldn’t typically expect of a Commedia troupe (Henry V, Our Town and The Cherry Orchard to name a few), Producing Artistic Director Paul Reisman has penned an original vehicle for his Fools, an Agatha Christiesque whodunnit set in the Hotel Maguffin.

The number of contemporary comedy tropes that have their roots in Commedia dell’Arte (and even further back to Plautus, Aristophanes, et al) are too numerous to count. The Commedia archetypes are present to some degree in every story be it comedy or tragedy, which appears to be the entire point of the Fools’ oeuvre. And if you’ve seen Neil Simon’s Murder By Death, it’s evident – nay, elementary – that murder mysteries are prime fodder for parody.

The Great Commedia Hotel Murder Mystery from Faction of Fools closes May 19, 2019
Details and tickets

One challenge with the small cast is that one might expect a few more summoned guests than, well, three plus a mysterious interloper. The extended door-slamming sequence was a bit of a struggle – between a few doors not staying shut and the narrative thrust being rather muddled, I found it confusing to follow, though when the characters recapped the events later it became clearer in retrospect.

Nonetheless, the story is performed with panache and brio by the entire ensemble, with amusing and nimble physical comedy, lovely mask work, and colorful costumes. And true to their longstanding relationship with Gallaudet University, numerous performances are ASL interpreted. Chukwudi Kalu, a Gallaudet student, signs his lines, and the play’s dialogue is displayed on an electronic message board during the performance.

I look forward to their take on Long Day’s Journey Into Night. One can dream.