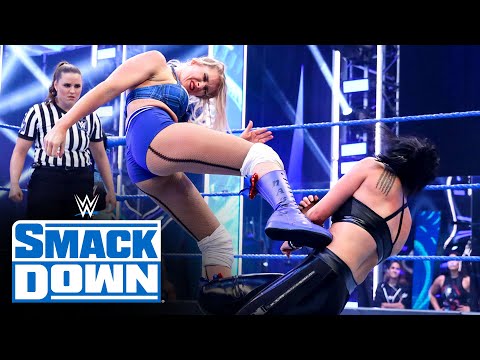 Another great week for women’s wrestling occurred this week on SmackDown. Mirrored to last week we saw two matches. One was a rematch between Sonya Deville and Lacey Evans and the other was the advertised match for the Women’s Tag Team Championships. That match saw the champions Alexa Bliss & Nikki Cross defend against Sasha Banks and SmackDown Women’s Champion Bayley.

Sonya and Lacey had a very physical match last week that ended in a double count-out. This week we expected a clear winner.

Sonya continues to show the viciousness that she has been displaying in recent weeks. In fact, she didn’t even wait for her entrance before jumping Evans from behind before they even made it into the ring. Deville took the main control of the match after the original referee of the match was injured. Evans tried to gain control of the match but a quick grab to her hair and she was planted on the mat.

The highlight of the match came right after when Deville held Evans over the edge of the ring. She delivered a neckbreaker type move to the back of Evans off the ring apron to which commentary could only refer to it as a whiplash move. She followed this up by plowing her into the steel steps.

Evans was able to bring back some momentum to her side as she first hits a clothesline followed up by numerous kicks to the midsection. She hits her signature moonsault, but only gets a two count. Deville gets back into it with a knee that ties Evans up in the ropes which she uses to her advantage before the count of five.

Mandy Rose would then appear on the tron screen. She says that she knows that Deville wanted to make her hurt, however, it must hurt her more to know that she is not a fighter. She is a failure.

This was enough of a distraction for Evans to deliver the Woman’s Right for the pin and the win.

The second match of the night was rightfully in the main event. The ending perhaps was a shock to many that didn’t expect new Women’s Tag Team Champions. Alexa Bliss and Nikki Cross had their 62-day reign come to an end when Bayley and Sasha Banks became now two-time champions. For a review of that match, please click here.

Let’s get into the Winners & Losers:

Clearly the biggest winners of the week. Bayley is now a double champion, and first woman to ever hold both the tag title with a singles title. She is also one of only three women to hold two titles at once. The other two being Paige briefly until she had to give up the NXT Women’s Championship, and of course Becky Lynch.

This adds another layer to their story. I, like most fans, are really wearing thin about waiting for the turn for years now…but I am okay with this win. What I am not sure though is where this leaves The IIconics.

Bayley’s heel work is so great, despite the slow start to it. She really has proven herself in my opinion. Sasha getting the pin was the right call as well.

Their chemistry is really a find that I never knew existed. They both are clearly putting in the work. Sonya is proving that she honestly is the next big thing. She needs some gold next. Maybe now that Bayley has the tag title also we can see Sonya go for the SmackDown title.

Not sure how I feel about Mandy still being involved in this. I love her feud with Sonya, but I am not sure if I am ready to give up Lacey vs. Sonya either.

Not sure if this loss will start breaking these two apart or not, but they clearly were the losers of this week’s show. I don’t see a point in breaking apart any tag teams right now, they need to be doing everything the can to have more.

I don’t see them regaining the titles back soon. That is unless they are adamant in them being the first ever three-time champs.

What did you think of this week’s SmackDown? Who were your Winners & Losers? Discuss in the comment section below.