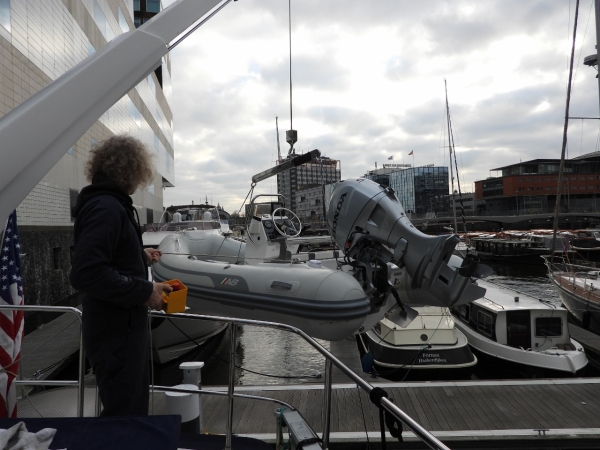 We’ve had three pendants fail on our Steelhead Marine crane over the last 9 years. The proportional switch proximity sensor is very fragile but there are other failure points as well. These pendants cost just under $1000 each, so we really needed a longer lasting and more economical solution. Steelhead does sell a remote-control for this crane, but it was sufficiently expensive that we decided to do what we did with the TV Lift: adapt a generic remote control system to drive the equipment.

The remote control we are using for the TV lift is working well, but the crane is more complex with eight different motions, and its remote also needs to be sealed against weather. We opted for a $550 Kar-Tech Proportional Mini GUIDER wireless remote that we brought back with us to Amsterdam on a recent trip to Seattle. This is the same remote control that is supplied by Steelhead Marine if the wireless pendant option is chosen. In this article we explain how just doing 12 crimped electrical connections is all that is needed to enable a wireless remote for an ES-Series Steelhead crane for $610.

In the picture below we’re associating the remote with its base station and testing to make sure the assembly is working.  Also visible to the left are the 12 pin Deutsch connector pig tails that we picked up from Amazon and will be eventually be using to install the base station for this remote control 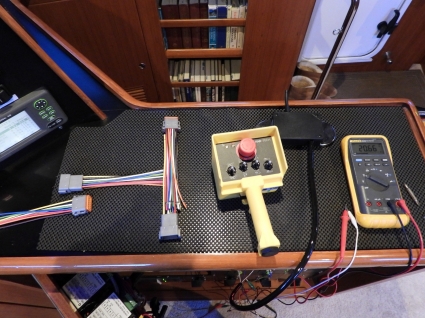 We didn’t have a wiring diagram for the existing crane controls, so the next step was to determine the functionality of each of the twelve wires. We needed to find power, ground, proportional, pump, boom extend/retract, boom swing left/right, boom up/down and line extend/retract. Using a Deutsch pig tail plugged into the existing pendant control circuit, we probed for each functionality.

We next mounted the remote control base onto the davit and temporarily wired it in to ensure the remote worked using our findings. This last step was only required because none of wired pendants were currently working. Towards the end of the article we’ve included the color codes to allow easy installation of this remote control with the SteelHead Marine ES-Series cranes without this exploration.

In order to keep the existing pendants working, we planned to build a three-way harness where one end would connect to the wireless remote base, another to the davit control system and the third to the existing wired pendant control.

Below James is determining the wiring for the round pin-based connection on the side of the davit housing where the existing wired pendant attaches.

The next step is to build the three-way harness from two Deutsch pig tails. This allows the wired pig tail socket and the wireless remote base station to both plug into the crane harness allowing either to be used at any time.

And we have davit remote! The only issue we encountered was the davit housing interfered with the mounting spot for the remote control base, so we moved it around to the other side, closest to where Jennifer is standing. We may move the base station down to the circular base where there is more space and less obstruction. 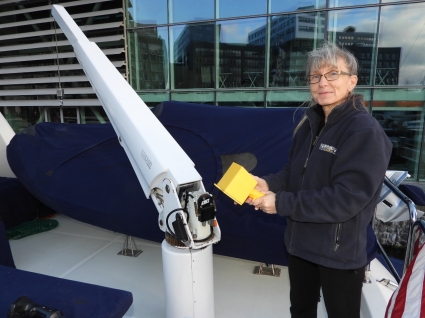 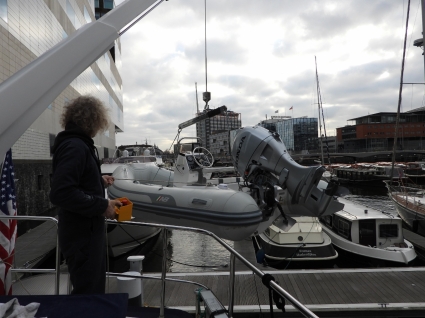 Spending some time understanding the crane wiring made the problem with one of the wired remotes very clear. We noticed there were only 11 pins in the crane socket but we know we need 12 for full operation. Looking at the socket below, you can see the power pin has corroded away. Unfortunately, the remnant of the pin was stuck in our new wired pendant. We used a needle to slowly work the pin to the top of the hole and a small pair of tweezers to remove it.

In the picture below, the corroded pin we removed from the pendant socket is at bottom and above is a new pin (TE Connectivity CPC Series 1) that we installed in the outlet. The second picture below shows the new pin in place (leftmost).

Once the pin was replaced in the outlet, and the rusted out pin was removed from the pendant, that pendant worked fine. Our second pendant was found to have a failed fuse, and the third has a broken wire somewhere between the pendant and the connector. If we had nothing else that worked, we probably could make this one work, so we’ll save it. 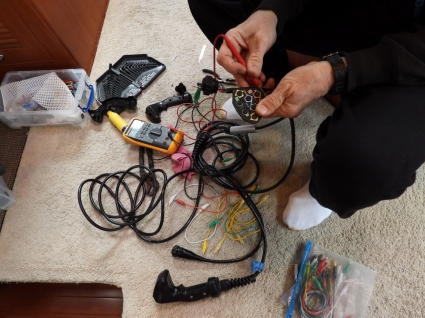 We now have two functioning wired pendants and a brand new wireless control, so we feel in pretty good shape for davit control. 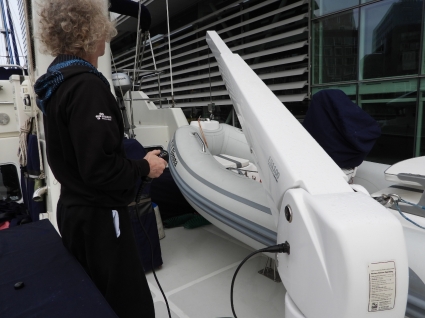 If you purchase 2 of the Deutsch pig tail from Amazon, then the following will allow you to quickly construct a Y connector allowing both the wired and wired remotes to be plugged in at the same time.

The following is in order with the plugged in such that the green wire is 24v+ and the orange wire on the other side of the connector is 24v- (the connector will plug in either way so the orientation is important):

You don’t need the data below to complete the installation of the wireless remote but, if you are trying to diagnose crane problems, the color codes for the wired pendant socket makes it quite easy to isolate the problem:

This is an excellent solution for those wishing to add wireless remote operation to the Steelhead Marine ES-series of crane.  You will need these parts:

That’s all that needed to do this installation. The Kar-Tech remote base station is equipped with magnets that allow it to be stuck to the crane. You need to do 12 crimped wire connections using the above color code data and, once done, just plug it in and enjoy remote crane operation.