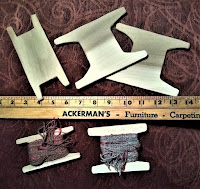 Weaving and Pottery at Viking Festivals 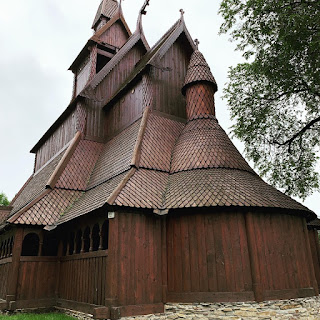 June 22 and 23 this year we went off to Moorhead, Minnesota for the Viking Festival at the Hjemkomst Center Museum.  This is the 3rd year I donned my Viking outfits and Roger and I demonstrated. Roger made his bowls and I tried to learn card weaving. I made some wooden tablets but still have difficulty turning the cards. I am a band weaver, Scandinavian but a later time period. Vikings would be using the tablets. I brought my gate style band looms as back up.  I figured I can show people what Vikings did not do. 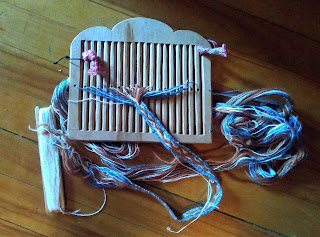 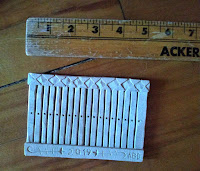 I also carved a small loom while I was at the Festival on the first day with my chip knife. I had previously cut a piece of poplar from Home Depot and planed the two sides with a larger knife.  All I had to do was mark and carve the slots and then drill the holes. I had time to do a little carving on one side as the Norwegians were fond of doing.

The second day, I wove some  plain bands on my new small loom. I used grey wool and red dyed linen. Wool tends to stretch, so many of the old bands had a few threads of linen incorporated in the pattern.
I also make winders from my Home Depot poplar.  These I had cut out at home on a band saw. I like to finished the edges with my chip knife to give them an old look and also smooth the edges so the threads will not get snagged. These winders are a great way to display or sell your bands.

I am also a potter. I specialize in Early American Pottery, but there is some controversy about Vikings making pottery or acquiring it from nearby territories.  The Saxons were making hand-built and wheel-thrown pots throughout the Medieval and Viking period.

With my English background, I decided to try out some early Saxon mugs. South east of London had some yellow/cream colored clay. Early potters used a lead and copper glaze to color and seal their pots.

Later, in the 1600s, Yellow ware as we know it and what I specialize in, was refined and the Mocha patterns applied. The earlier Medieval pots were crude and to me, more appealing. So I made some mugs in my own style.


The Hjemkomst Festival is a great place to spend a June weekend. Below are photos of some of the goings-on. 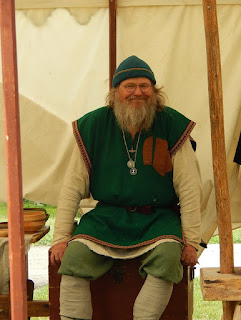 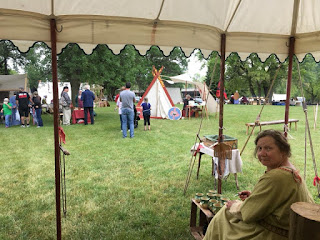 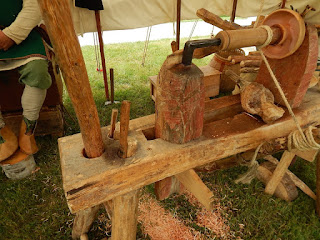 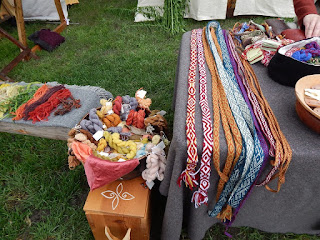 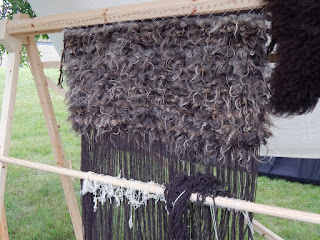 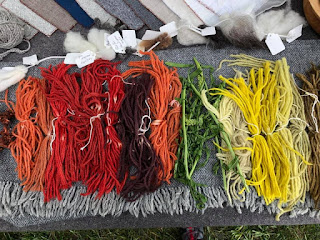 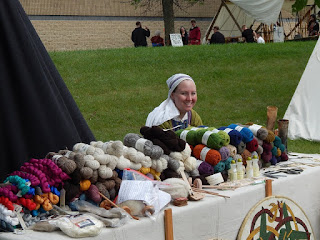 You can see lots more photos and get links to the event and "Vikings" involved at their facebook page... https://www.facebook.com/pages/Hjemkomst-Center/116705061711198

And if you are new to band weaving, you can learn how to weave on these simple portable looms with my book "Tape Loom Weaving...Simplified" at my web site, www.eastknollpottery.com or Amazon.com

Weaving and Pottery at Viking Festivals