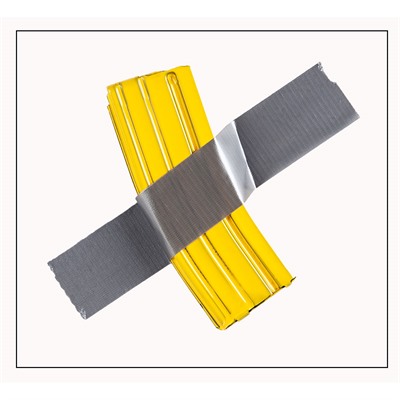 Now, This Is Art: How To Mock Modern Art In A Pro-Gun Way 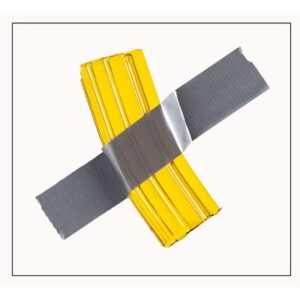 Most people in the world are confused by modern art. They don’t understand it. And, frankly, it’s not because people are stupid. It’s because modern art is often weird and downright nonsensical.

Take a recent “piece” presented at the Art Basel art show in Miami Beach, Florida which sold for $120.000. It was a banana duct taped to a wall. No kidding.

Now, the artist and the purchaser and those running the art show are going to tell you that it’s a representation of something else, and the big ideas behind it are what makes it valuable.

It was still a banana duct taped to a wall, though. Then the guy ate it. Seriously.

Fortunately, some people know how to take such, dare I say?, absurdity in a light which we can appreciate. Specifically, Brownells is now offering shirts which are an image of a rifle magazine duct taped to a wall (see the image above). From Brownells (hat tip to here for the lead):

The Brownells sculpture “The Joke-AR” lets you show off your highly-refined taste in modern art while simultaneously supporting Special Operations Wounded Warriors – a 501 (c) (3) charitable organization dedicated to helping Purple Heart recipients of the US Special Operations community.
The original inspiration for the Brownells ARt Shirt, the limited-edition artwork is a stark yet compelling abstraction, perfect for display in avant-garde galleries, tastefully-appointed libraries, gun rooms and basements everywhere.

Painstakingly handcrafted one at time, each piece will include one Brownells  AR-15 magazine – masterfully spray painted the color of ripe tropical fruit – affixed to a blank white background by a strip of metallic duct tape.

Oriented to enhance the perception of tension and to give the impression of upward flight, the juxtaposition of the bright, almost-edible yellow underneath the stark interrupting slash of industrial silver tape is both jarring yet soothing.

The Joke-AR tacitly reminds the viewer of the importance of the AR-15 and the Second Amendment, as well as tasty bananas and the tape often employed by HVAC professionals and clever handymen to improve our daily lives.

Each sculpture will be marked by small, individual differences, as expected with small batch, handcrafted art.

Limited to only 10 pieces, the Brownells Joke-AR sculpture retails for $1,200 and is numbered and signed by the artist.

All proceeds from the sale of Joke-AR sculptures will be donated to Special Operations Wounded Warriors.

Not available in states with bans on standard-capacity magazines.

The post Now, This Is Art: How To Mock Modern Art In A Pro-Gun Way appeared first on Prepared Gun Owners.

Now, This Is Art: How To Mock Modern Art In A Pro-Gun Way