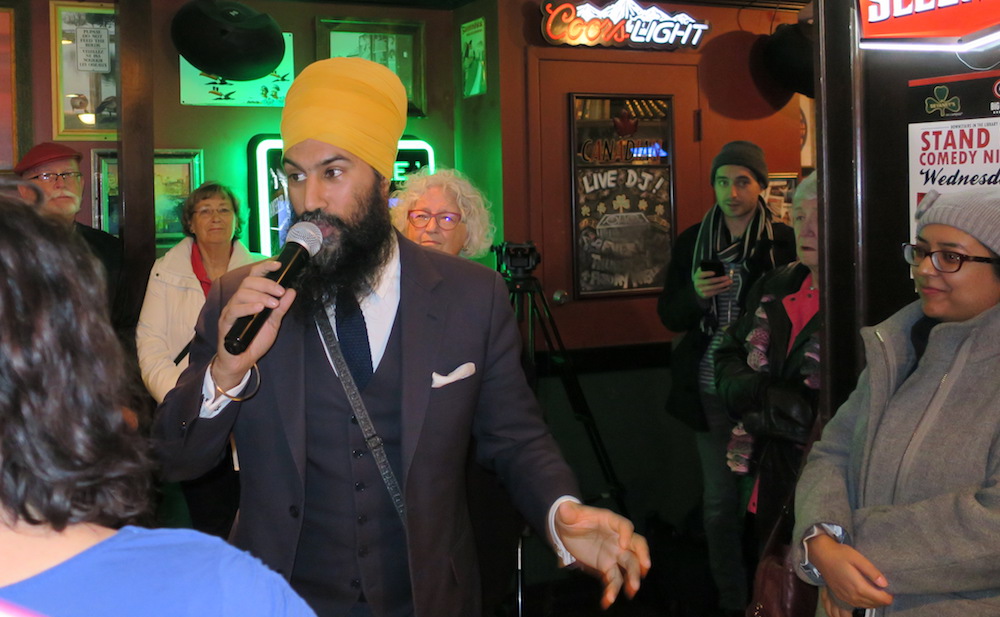 Even if all the New Democrats vote Liberal and all the Liberals vote NDP in the Burnaby South by-election today, the outcome could be a very close one. It’s rude of me to mention this just now, of course, but you have to admit something like this could very well happen. After all, only 547 votes separated the two parties in the last federal election, when becoming mayor of Vancouver was still just a twinkle in the eye of the former New Democrat MP for the riding, Kennedy Stewart. NDP candidate Jagmeet Singh has not exactly been a sterling success since Canada’s New Democrats made him their party’s leader in October 2017. His recent positions on several issues have been assailed, not without justice, as nearly incoherent. Since there is no guarantee the 40-year-old former Ontario MPP and deputy Ontario NDP leader will do any better as a Member of Parliament, New Democrats can be forgiven for growing increasingly fearful about how Mr. Singh might perform in The House of Commons. If he wins and then doesn’t improve his game, disaster may await the NDP in the fall general election. Liberals could be forgiven too if they conclude based on Mr. Singh’s performance as party leader over the past 16 months that nothing would be more likely to help their party in the looming federal general election than having him lead the NDP in the House and into the campaign. The Liberals should have been a deadbolt cinch to win the upcoming election without the requirement for help from Mr. Singh or anyone else. The national economy has been performing well, and Opposition Leader Andrew Scheer looks like a lame version of Stephen Harper, who remains a Conservative éminence grise and a negative factor for voters. The thought of Mr. Harper ruling at one remove is anathema to most rank and file New Democrats and Liberals alike, no matter what kind of long game some NDP strategists may wish to play. So Mr. Scheer shouldn’t have been much of a threat to Prime Minister Justin Trudeau even without the sour grapes Tea Party uprising against the Conservative leader led by his former rival Maxime Bernier and his so-called People’s Party of Canada. But that was before the Prime Minister’s Office bungled the SNC-Lavalin affair and the related demotion and resignation of former justice minister Jody Wilson-Raybould so badly it tossed the hapless Mr. Scheer and his strategic brain trust of ex-Rebel-Media hacks an unexpected lifeline. Until recently, the PMO’s handling of this ongoing meltdown has been so ham-handed it will probably go down in history as a case study of how not to deal with a political crisis! As a result, the Liberals are probably lucky their last candidate in Burnaby South, the injudicious Karen Wang, had to be sent packing for what was widely interpreted as a racist comment about Mr. Singh. The Liberal standard bearer in the by-election is now Richard Lee, a former MLA for the B.C. Liberals, who, readers should remember, are really conservatives. Some political analysts have suggested the Liberal turmoil will help Mr. Singh. But, remember, nearly 40 per cent of the population of the riding is of Chinese origin, and Ms. Wang’s undiplomatic remarks notwithstanding, that may end up being a significant factor today. If Mr. Singh is declared elected tonight, I imagine we won’t hear for a little while from ambitious high-profile New Democrats with leadership potential. It seems likely, though, that some of them will nevertheless start making discreet moves behind the scenes in anticipation of Mr. Singh’s performance continuing to be as underwhelming in the House as it has been up to now outside of it. If Mr. Singh is not elected, we will probably be hearing sooner than later from the likes of Nathan Cullen, who sat out the last NDP leadership race, and the ambitious Avi Lewis, scion of one of the founding families of the NDP, who has been extremely quiet of late. And what is Svend Robinson doing back in the country all of a sudden? Count on it, the stars in the NDP firmament are moving into alignment for someone. But even if he wins tonight, it may not be Mr. Singh.

The post The stars of the NDP firmament are aligning today for someone in Burnaby South – it remains to be seen if it’s Jagmeet Singh appeared first on Alberta Politics.