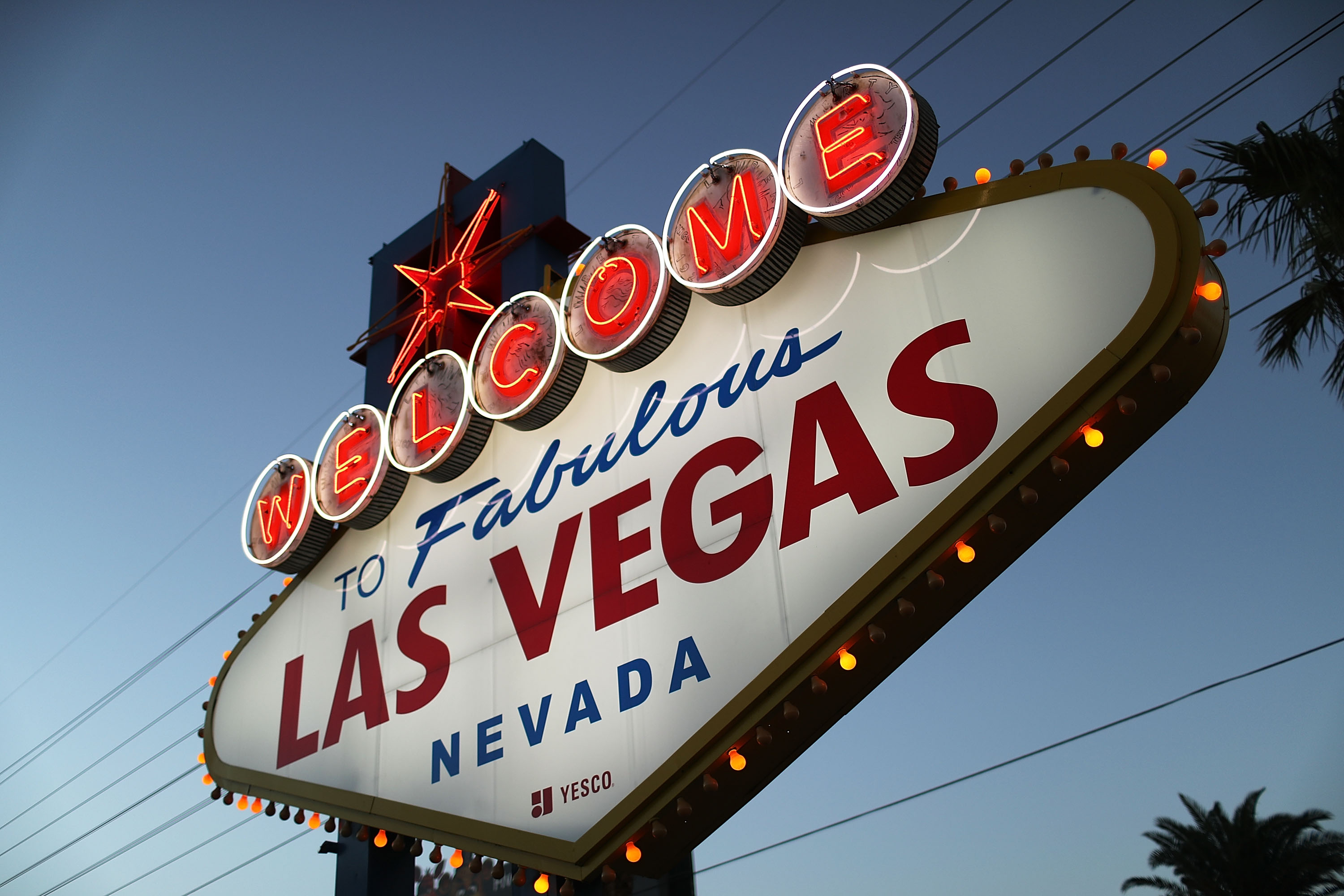 A foodie’s guide to a weekend in Las Vegas

Has a neon sign ever given you life? The blaze of bright lights shaking you out of your slumber, the humming electric tubes replenishing all you’ve lost?

Or maybe I should rephrase the question. Have you ever been to Las Vegas?

I was saved by a neon light, my friends. A pink, cursive, neon light spelling “milk.” Call it a coincidence. Call it divine intervention. But please, call it what it is: pure Vegas magic.

My revival happened inside The Cosmopolitan hotel (as good of a place as any for a miracle, I’d say) and, to make a long story short, what saved me was the cult bakery Milk Bar and what it saved me from was the stomach flu.

I was in the city that truly never sleeps where lust and greed collide in grotesque, euphoric ways solely for the most deadly of all the misdeeds: gluttony. On an earnest mission to eat as much as humanly possible from Vegas’s new(ish) restaurants in a 48-hour period, you can see how the sudden onslaught of the stomach flu on my flight out rendered me desperate for that hot pink, shining cursive miracle.

Las Vegas has collected the greatest hits from everywhere else — not just in its hotel Strip topography, but in its restaurants, too. More than any other city on Earth, Vegas has perfected the art of mixing the unabashedly copied with the totally unique into one kitschy, yet still somehow so-sophisticated, desert playground. This is especially true of its bountiful, constantly-changing selection of restaurants.

When I laid eyes on the Milk Bar sign at 9:30 a.m., I was still sick and not-at-all-hungry. Half heartbroken and half too nauseous to care, I’d had to cancel my dinner reservation at Catch – the new seafood-focused, celebrity-frequented restaurant inside Aria — the night before. Throwing up on a Southwest flight is one thing, but throwing up inside a restaurant where there’s a very real chance I could be seated near George Clooney is an entirely different affair altogether.

But stumbling over to The Cosmopolitan to see — even if I couldn’t taste — what the Eggslut fuss was all about, the first thing I saw was the glowing “milk” sign, and its promise of rainbow truffles and chunky milkshakes was enough to wondrously awaken and revive both my energy and my appetite.

Los Angeles-based Eggslut and New Orleans’s District: Donuts. Sliders. Brews. battle it out in the morning for the lines of hungry, hungover people. Instead of diving into Milk Bar’s baked goods for breakfast, I chose to eat at Eggslut because people speak of its breakfast sandwiches the way I want George Clooney to speak of me, which is to say, with hearts in their eyes and honey on their tongues. I tried the two most popular menu items — one, the bacon, egg and cheese sandwich with an over-medium egg; the other, a jar of coddled egg and potato purée into which you dip slices of toasted baguette. They were both very good, but I wouldn’t describe either as being especially Clooney-worthy.

Now that I was able to eat, there was no stopping me. I headed to the Park MGM (formerly the Monte Carlo) to check out the brand-new Eataly for lunch. It was my first time at an Eataly, which is a large Italian food hall of restaurants, retail and bars. (Fun fact: Eataly actually originated in Italy, which I didn’t know and, I think, makes it more legit.)

The Las Vegas outpost is the chain’s sixth U.S. location, and the first to have some vendors open 24 hours. (Of course.) Because they’re feeding mostly tourists, this Eataly is more restaurant-focused than retail. Stalls include a fresh pasta eatery, cheese counter, bakery, gelateria, Nutella bar (!!!), cook-it-for-you butcher and fishmonger, and three different spots for pizza.

I tried the sit-down La Pizza e La Pasta, which is as aptly-named of a restaurant as I can think of. I could have eaten more than one silky, creamy ball of burrata, but I did a very un-Vegas thing and practiced self-control, saving room for the excellent Neapolitan-style margherita pizza.

The most celebrated among the overly-celebrated

There’s nothing new in me saying that it’s all warranted. But maybe there’s something new in saying that the mere sight of the restaurant and its adjacency to sister bakery-turned-breakout star Milk Bar acted as a magical elixir that restored my vim and replenished my hunger. Maybe?

The pork belly buns were just as addictive as you’ve heard, the ramen even more loaded with black truffles than you can imagine. The surprises were the vegetables — especially the spicy cucumbers and sweet and sour long beans — and the tuna with frozen, shaved foie gras, which sounds like an absolutely horrible idea but of course was an absolutely glorious idea; it made me actually worry about the restaurant’s profit margins because there was just so much frozen, shaved foie gras.

Milk Bar, with its electric pink Brush Script sign, is right next door. You may know its creator, Christina Tosi, from her role as a “Master Chef” judge and subject of “Chef’s Table: Pastry.” Or you may know of Tosi’s crack pie, naked-sided birthday cake, cereal milk soft serve ice cream and habit-forming compost cookies.

If you haven’t already, all of the baked goods are worth trying. That way, you’ll know best for the next time what to spend your small fortune on. Case in point: I left with $34 worth of birthday cake truffles and a $10 milkshake. I do not regret this one bit.

Late last year, Bellagio switched out its Café Bellagio for Sadelle’s, a popular brunch spot from New York City specializing in smoked fish, bagels and pastries. It’s known for doing things a little over the top (caviar is a big thing here), so of course it fits in perfectly in its new home just off the Bellagio conservatory.

The smoked salmon — served on a tower with tomato, cucumbers and capers with a bagel and cream cheese — would have had me coming back each morning for breakfast, had I had any more mornings left in Vegas. The pastry cart — loaded up with sticky buns, rugelach, babka, cookies and so much more — also merits exploring.

Some of the best Las Vegas restaurants are off the Strip (if you haven’t been to Lotus of Siam, book a trip just for this incredible, strip mall Thai spot), so on my way back to the airport, I stopped at Pacific Island Taste, a Hawaiian hole-in-the-wall that opened last year. Las Vegas is sometimes called the Ninth Island because so many Hawaiians visit or move to the city. So, if island food is your thing, this is a closer-to-home place to get the real deal.

Working behind the counter, Maria was the friendliest person I encountered in Las Vegas. Or maybe ever. She could not believe that I Lyfted all the way over to the Charleston Boulevard strip mall just to try her food. A Honolulu native, she was one of the many Hawaiians who jumped the Pacific to make Las Vegas her home.

Because it was my first time in, Maria loaded me up with all kinds of freebies so I could try her favorites. Thank goodness, because I would have missed the pork hash (shumai-like dumplings) and Long Johns (custard-filled doughnuts). Both will be must-orders on my next visit.

And then, seemingly as suddenly as the stomach flu struck on my way out to Vegas, it was time to go home. My 48 hours were over; my earnest eating mission ended. It wasn’t neon, but I left the extra Long John Maria had given me on my Lyft driver’s front seat. She said she liked doughnuts, and everyone needs a little Vegas magic.

Subscribe to our weekly newsletter to get outdoor news sent straight to your inbox.

A foodie’s guide to a weekend in Las Vegas