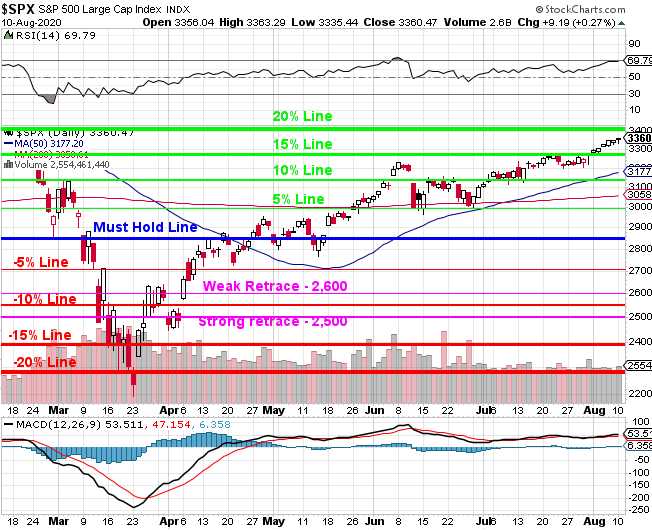 Why didn't we think of this before?

A deadly virus sweeping the planet is GREAT for the stock market!  There we were trying to keep stores open and going to work and making things – what a waste of time that all was, right?  All we had to do was stay home and have the Government print money – we are all "welfare queens" now, aren't we?  That's especially true of our Corporate Citizens, who are getting hit after hit of Government cash and paying record-low rates for record-high debt – what could possibly go wrong?

The stock market is up 5% in the past week and 15% since July 1st and 54% since March 23rd's 2,200 low – that's a pretty good rally.  We caught that rally and now I think it's time to CASH OUT of our crisis trades so let's do a quick review of the trades we made while the rest of the World was panicking and yes, I'm now telling you to GET OUT!!! while the rest of the World is buying – imagine that….

That's right, it was now 5 months ago when we first plunged below our 2,850 "Must Hold" line on the S&P 500 and, as I said back on March 12th, "When the going gets tough, the tough go shopping" and it's not just the lower stock prices we take advantage of when our fellow investors are panicking out of positions but the higher levels of volatility raise the Volatility Index (VIX) and allow us to "Be the House" and sell options for fantastic premiums.

Initially, we sell puts to establish good entries in positions when we think there may be more downside.  We'll see how those are doing and decide whether we want to expand on our plays.  The first round was taken on March 12th, and these were the original trade ideas followed by the current price and profit in caps.  If I don't mind holding the position – we'll call it a KEEPER: