Though he may no longer be an active blogger, Matt from Bob Walk the Plank is very much still out and about in the collecting world, which is easy to tell if you follow him on Twitter.  He posts his pickups and trades over there so he's definitely worth a follow.
Speaking of trades, my West Virginian collecting counterpart sent some cards my way--in an unorthodox fashion--in time for Christmas.  I love the spectrum of people I swap cards with since they increase the diversity of my collection, and if I had to label the stuff I get from Matt at this point, I'd go with higher-end Tigers and Wolverines with a nice emphasis on my PCs.  Whereas I have a show (or two) that acts as a good source for fun inserts and low-end hits, which I supplement via eBay and COMC, Matt hits me back in a big way with quality over quantity, and the results have been amazing.
That's why I should have known who was behind a pair of cards that arrived separately last month that research ultimately proved came from eBay sellers.  I knew I wasn't waiting on anything so I took to Twitter and Matt reminded me that I had a few things on the way.  Boy did I ever!
In total, Matt appears to have had three cards shipped directly to me, which made for a fun surprise before I even saw what the cards were, at which point my jaw hit the floor.  Please enjoy this high-end Christmas package from him that would lead you to believe that I live in a certain city in Ohio (barf) if not for their Michigan connection: 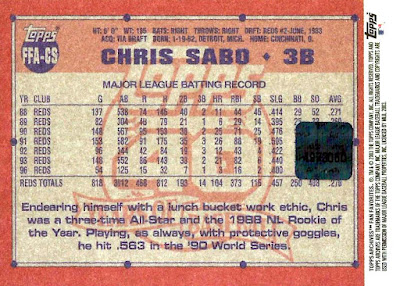 Spuds-erman, Spuds-erman, does whatever a Spudser-man can!  I believe this super cool Chris Sabo autograph from 2003 Topps All-Time Fan Favorites was the first of the three to arrive, and I was definitely excited when I opened it (before realizing that I hadn't bought it and didn't know who it came from).  That's because while Sabo is a pretty well-known player, he currently only has 25 autographs to his name, and of those only five of the products are MLB licensed (e.g. Topps).

As it turns out this is actually Sabo's first autograph, and it's from one of Topps' products with the somewhat rebooted (it was used a bit in the 90s) Archives/Fan Favorites branding in the early 2000s before they milked it for all it was worth.  It's a nice portrait of Spuds on the 1991 Topps design, and I like that the back notes his excellent stats in the Reds' surprise 1990 World Series win.  As for the front, he has a very interesting signature to look at, and now I'm excited to add hit #1 of the '88 NL ROY, a card that gets me to about 75% of his 200-plus cards I'm chasing (and 181 overall). 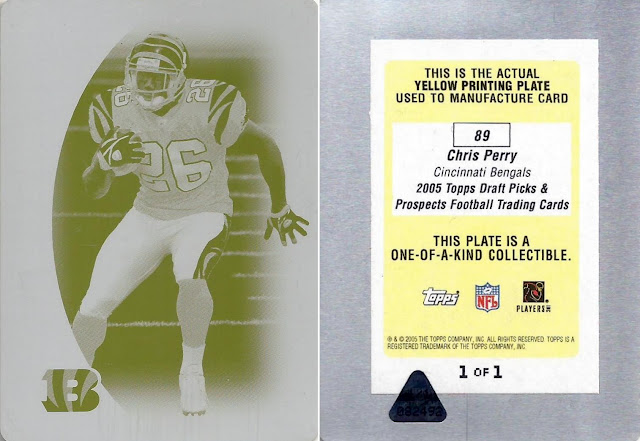 I believe this card arrived that same day, and again, it was in another envelope from a different address, increasing my confusion.  I love including 1/1s in some of my trade packages--and had especially good luck buying them on COMC during the Black Friday sales, benefiting Matt, among others--but getting one back was a really nice treat.  Better yet, it stars one of my favorite Michigan Football PCs, RB Chris Perry.  As you can see, this one comes from Topps Draft (2005), one of my favorite Topps products back when they made them.  The designs could be pretty fun, especially the 2003 and '04 versions, and of course I loved seeing the players in their college unis.
In this case Perry was going into his second year so he's grouped with the vets, joining Tom Brady and Drew Henson.  I'll also point out that this is one of a number of products in the hobby that inserted plates for the fronts and backs of the cards, which is a fun thing to see every now and then.  That's actually the case for 2005 Topps Total, which is responsible for the other Perry plate in my collection--the front version, if you were curious!  This is a great addition to my Perry collection, 115 cards strong with 52 of them being of the "hits" variety, good for 9th in the collection.  It's also plate/1-of-1 #129 in my collection.
Now here I'll pause a minute for effect and to mention two things.  The first is that today's theme is high-end Cincinnati cards, not players named "Chris," so expect something a little different next.  The other is that any reasonable person who got those two cards above would be thinking to themselves that their (unofficial) secret Santa had already been especially generous and thankful for what they got.  I am that kind of reasonable person and at that point I felt that Matt had already done enough to ensure a merry Christmas for me and my collection.  Apparently he felt otherwise because he let me know that one more card would be arriving soon.  And boy did it ever: 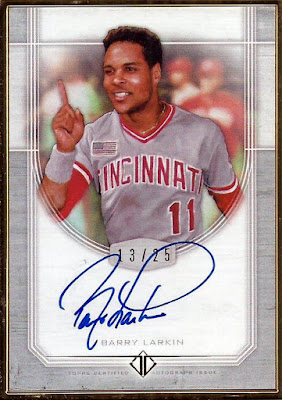 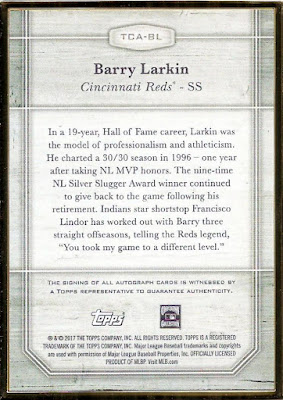 Yowza!  Now there's a Topps card I can get behind!  Transcendent's prices aren't affordable for most collectors, but sometimes when you let breakers pay the gambling tax and then list them on eBay you can benefit.  Even so, I really have to credit Matt for his generosity in sending me this 2017 autograph of Reds/Wolverines HOF legend Barry Larkin!  I think this is what today's kids call "being extra," but in the best of ways.  Larkin's autographs aren't the cheapest even on the lower end so an on-card version limited to 25 copies in this ultra high-end product probably set Matt back a few bucks.  Between that and all the red going on between this and the Sabo, I think he really got into the spirit of the season!
So let's get into the details of the card.  The front has an image from the previously mentioned 1990 World Series, done up very artistically.  There's a section that's plenty large for a signature and I love that Barry managed to loop his initials a bit above it to where the numbering is, plus I just flat out love his signature.  The back has a good writeup that mentions some key things about his career, like going 30/30 and winning the '95 NL MVP, plus I like that blurb about training with a guy that's somewhat his current counterpart in Lindor.  I think mentioning the '90 series would have been cool, but short of that, thumbs up from me.
But the biggest aspect of this card besides the signature is its thickness.  A 2D scan can't portray this very well, but not only does the card have a lot of depth to it, it's also very heavy because it has a gold frame around it.  Topps has done framed cards recently to what I would consider good effect--hell, it's much better than another of the endless color or Hallmark holiday parallels--and that adds to the quality of this piece, making it something I'd definitely like to display if I was on the fence about it for some reason.
While I'm proud of the size of my Larkin collection (772 cards as of this post, including 21 hits), this is just my sixth auto of the former superstar, which I know is more than some other collectors, but a  number I'd like to grow.  That's not intended to be a humblebrag but instead another reason why I'm so impressed with Matt's generosity here.  Impressed but not surprised, considering the dude has sent me amazing stuff like autos of Griffey, Kaline, and a previous Larkin, among others.
Matt, thanks again for this amazing trio which most certainly let me enjoy a merry cardmas!  I look forward to swapping more cards this year and already have a few things in-hand that I think you'll like.
Everyone else can stay tuned for even more trade package fun, including another in-person deal and a box from our neighbor to the north slightly east.
Source: toomanycg