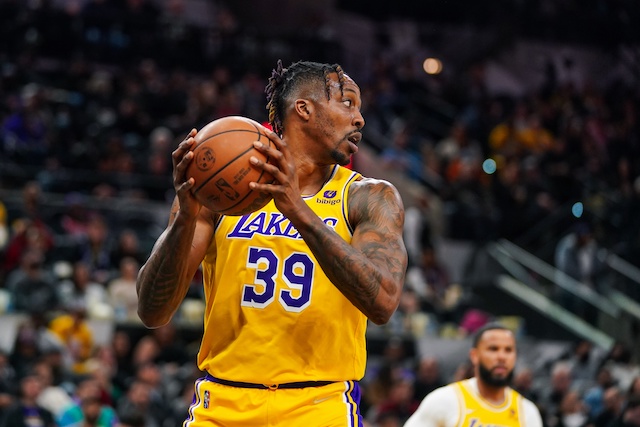 Dwight Howard reunited with the Los Angeles Lakers for the second time ahead of the 2021-22 season, enticed by the big-name signings the franchise made in the summer.

As the Lakers looked to embrace small-ball for good — and amid the arrival of DeAndre Jordan — Howard appeared to be Frank Vogel’s frontcourt wildcard for matchups that would require L.A. to play with a defensive-minded center in the paint.

The 36-year-old indeed started the season as a third option at the five. But after it turned out Jordan’s stay with the Purple and Gold wouldn’t last long, Howard kept moving between the starting unit and the fringes of the Lakers’ rotation amid Vogel’s experiments with centerless lineups.

The experienced center came to L.A.’s rescue on a few occasions, coming off the bench to help the undersized Purple and Gold on the glass, where they struggled throughout the season. He eventually ended 2021-22 with 27 starts in 60 games — clocking in 16.2 minutes per night and averaging 6.2 points and 5.9 rebounds, all career-low numbers.

Howard put his professionalism and athleticism on display in early January, chalking up 14 points and 14 rebounds — half of which were offensive boards — in an eight-point win over the Sacramento Kings. The center had not played in the previous two games but was ready to enter the floor when Vogel called his name in the first quarter, as the Lakers were being beaten up in the paint badly again.

“He did reward me for throwing him in there,” Vogel said after the game. “Played a hell of a game and it’s not easy to be a guy that isn’t playing every night and coming in and produce at a high level. I want to commend him on that on staying ready.”

Howard showed he remains a quality rotation player despite the generally limited chances he was given last year. And as he said after the Lakers made his second return official, “I just think that it’s like we’re supposed to be together” — so don’t rule out him donning the purple and gold jersey again in 2022-23.

Howard has already said he’s hoping to remain with L.A. — and that he thinks he has a couple of years left in him before he decides to retire.