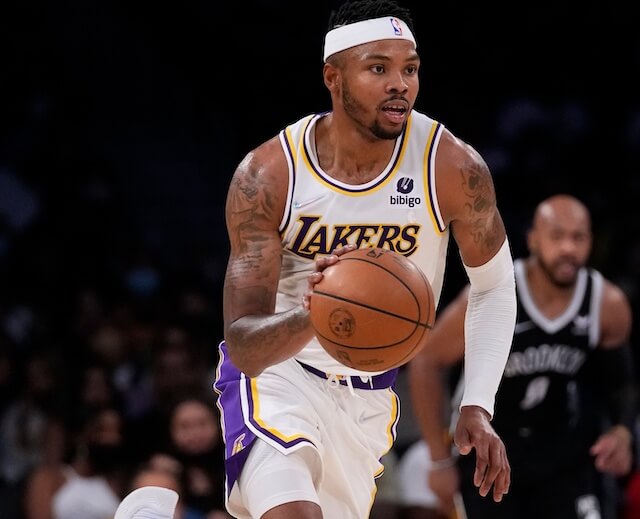 The Los Angeles Lakers’ team-building strategy the previous offseason was to bolster the shooting along the perimeter, but with only veteran minimum contracts to give out they were limited in their options. However, they managed to reunite with former Laker Kent Bazemore, who seemed earmarked for a role as one of the team’s 3-and-D players.

Bazemore started the first 13 games of the 2021-22 season, showing some of his versatility as a two-way player that could knock down open shots. However, his solid start quickly came to an end as he largely struggled to score the basketball and that was seemingly enough for Frank Vogel to relegate him to the bench.

Eventually, the swingman began to rack up DNP-CDs as he found himself out of the rotation completely, a disappointing outcome for someone most thought would have a significant impact for the Lakers. Bazemore ultimately only suited up for 39 games, starting 14 of them though his last start came out of necessity due to injuries and players in health and safety protocols.

For the season, Bazemore averaged 3.4 points, 1.8 rebounds,\ and 0.9 assists. His meager production was just one part of the team’s overall failure to make the postseason and could be a sign that his days as a rotation player in the NBA are numbered.

Bazemore’s best game of the season came early on in the year against the upstart Memphis Grizzlies. Still a member of the starting lineup, Bazemore played just a little over 28 minutes where he was a perfect 3-of-3 from the field and 3-of-4 from the free-throw line. The veteran would finish the night with 11 points to go along with one rebound and one steal in the Lakers’ narrow win over the Grizzlies.

Another noteworthy performance came in a loss to the Charlotte Hornets where he scored a season-high 13 points off the bench. Los Angeles lost by three points, but Bazemore provided a much-needed offensive spark during the contest.

Bazemore could conceivably come back to the Lakers should the team be interested as he will likely only garner minimum contract offers from other teams. Even though his second stint with the Purple and Gold went poorly, he could still provide some valuable depth on the bench. He may not be a rotation player on a contending team, but Bazemore certainly has some utility left.