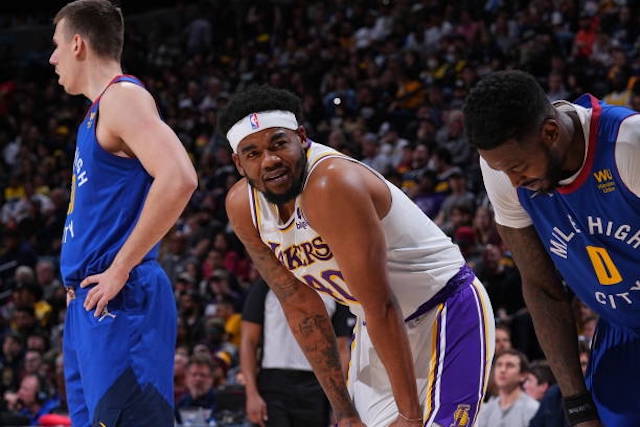 After going undrafted out of the University of Arkansas in 2020, Mason Jones bounced around the league last season spending some time with both the Houston Rockets and Philadelphia 76ers. Jones began this season in the NBA G League with the South Bay Lakers but performed so well that the Los Angeles Lakers rewarded him with a two-way contract in December.

Jones made a couple of appearances in garbage time of two games but spent the vast majority of his time in the G-League with South Bay where he absolutely dominated.

This performance was enough to be named to the All G-League First Team and he and G League Rookie of the Year Mac McClung helped lead South Bay to the G League conference semi-finals.

Once the Lakers were eliminated from postseason contention, the team decided to give some younger players an opportunity, leading Jones to be called up for the final two games of the season where he would play significant minutes to finish out the season.

Overall, being named to the All G League First Team was likely the biggest accomplishment as it showed his sustained excellence throughout the season. But in terms of his time with the main Lakers team, it is undoubtedly his performance against the Oklahoma City Thunder on April 8.

Jones was perfect from the floor, knocking down all four of his shots and finishing with 13 points and three rebounds in the Lakers’ 19-point win. He was also a +21 in just 18 minutes, tied for second-highest on the team that night.

Already on a two-way contract, Jones will have an excellent opportunity to show his growth as part of the Lakers’ Summer League team. The competition is higher than the normal G League and if he can put forth a great showing in Las Vegas, he will at the very least maintain his current two-way deal and join the team in training camp.

Strong showings in Summer League and training camp could see Jones garner serious consideration for a standard contract with the Lakers, though much of that hinges on what the team does in free agency and the draft this offseason. At the very least, Jones has the opportunity to solidify his standing as a two-way player and continue to develop in the G League.