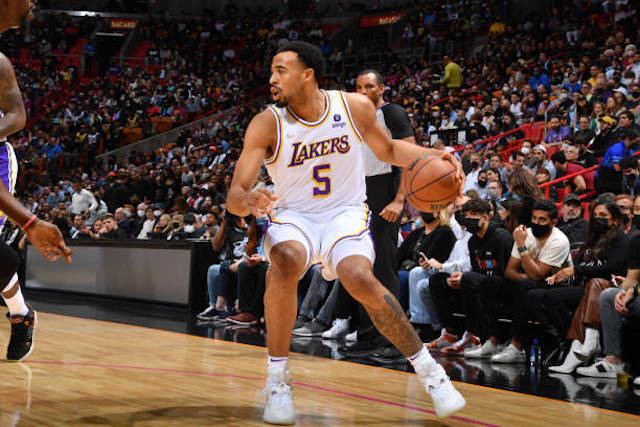 With the departures of most of the Los Angeles Lakers’ perimeter rotation including Kentavious Caldwell-Pope, Alex Caruso and Dennis Schroder, as well as versatile forward Kyle Kuzma, a lot of pressure was put on third-year guard Talen Horton-Tucker to step into a much bigger role. His three-year, nearly $31 million contract signed before the season only added to that pressure.

Unfortunately for Horton-Tucker, it was a bit of a mixed bag to say the least this season as he struggled mightily with consistency all year long. At times, Horton-Tucker showed the versatility, scoring prowess, playmaking and defensive potential that has the Lakers so high on him as a player. But other times he struggled to find his role and disappeared on the court for stretches.

This all led to a lot of rumors at the trade deadline about the Lakers potentially dealing away Horton-Tucker as he remains their best asset that would have to be included in any deal.

Some of Horton-Tucker’s struggles undoubtedly had to do with the fit of the roster overall as he often found himself off the ball offensively and, self-admittedly, still needs to improve in that aspect of his game. When he was allowed to be more of the primary creator there were some truly excellent moments and games in which he looked like a potential impact player.

Things also didn’t get off to the best of starts for Horton-Tucker as he had to have surgery on his thumb before the season, forcing him to miss the Lakers’ first 13 games. But he got off to a scorching start upon his return, looking every bit the future All-Star the Lakers believe him to be. From then on though, it was anyone’s guess as to the impact he would have.

Overall, Horton-Tucker still averaged a career-high 10.0 points per game to go along with 3.2 rebounds and 2.7 assists. His shooting percentages went down with the increased usage, however, at just 41.6% from the field and 26.9% from 3-point range.

Not everyone can say they scored 40 points in an NBA game, but Horton-Tucker did exactly that against the Golden State Warriors late in the season. Horton-Tucker showed it all that night, hitting 15-of-28 shots from the field and adding three rebounds, three assists and four steals.

While that was surely his best individual game, his best stretch was when he first returned from injury in November. Immediately inserted into the starting lineup, Horton-Tucker averaged 23.3 points, 7.3 rebounds and 1.3 steals while shooting 49% from the field and 40% from 3-point range in his first three games of the season.

Even though Horton-Tucker has been in the NBA for three years, he is still just 21 years old with plenty of potential to grow into a consistent player. This offseason it will be important for Horton-Tucker to work on his off-ball skills as he will not be the primary creator on any team with LeBron James, as well as his outside shooting and defensive consistency.

Of course, Horton-Tucker’s future with the Lakers is also in question as he remains the team’s best young asset if the team were to look to make any big trade. But should he remain in L.A., he will have to maximize his role and impact next to the team’s stars.