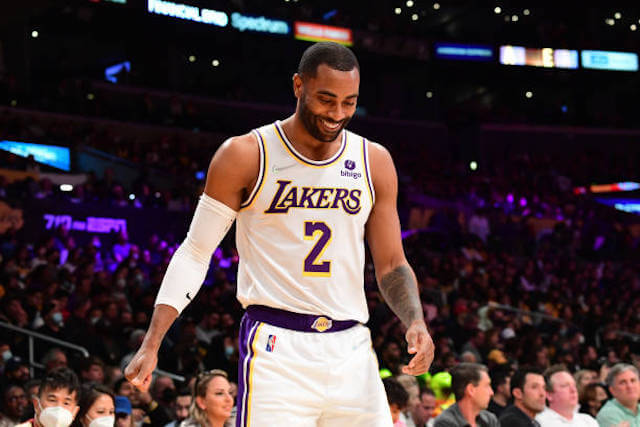 The Los Angeles Lakers’ signing of Wayne Ellington last offseason made a ton of sense. It has been proven that LeBron James is best when surrounded by shooters and Ellington has proven to be one of the most reliable 3-point specialists in the league.

Ellington’s season was a bit of a mixed bag with the Lakers as he had moments where he provided the sharpshooting the team needed, but oftentimes struggled with consistency. Overall, Ellington appeared in 43 contests, averaging 6.7 points while shooting 41.4% from the field and 38.9% from 3-point range.

Unfortunately for Ellington, his season started off on a rough note with a hamstring strain that cost him the first handful of games. Once healthy Ellington was a regular part of Frank Vogel’s rotation as the team’s best floor spacer and had his share of good games.

But with the Lakers struggling to get on track, Vogel regularly changed the rotation in hopes of finding the right combination of players to turn the season around. This led to Ellington finding himself out of the rotation at different points of the season, but to his credit, never became any sort of issue in the locker room and stayed prepared whenever his number was called.

This more or less became the story of Ellington for the rest of the season with his place in the rotation being unclear on any given night. Sometimes he was hot and provided a nice offensive spark and other nights he couldn’t get it going the way he hoped.

It can be very difficult for a player to stay in rhythm when their minutes are inconsistent or even nonexistent but Ellington showed why he is the ideal professional in a January contest against the Memphis Grizzlies.

After not seeing the court for three consecutive games, Vogel turned to Ellington and he delivered in a big way, knocking down 6-of-7 shots including four 3-pointers to finish with 16 points in just 11 minutes. It was the ultimate example of a true professional staying ready for his opportunity.

Ellington is one of many who signed a one-year deal with the Lakers and thus will be an unrestricted free agent this summer. Whether the Lakers have interest in bringing him back, and whether Ellington would want to return is unclear, but it wouldn’t be far-fetched if there was interest on both sides.

A veteran shooter who can come in and get hot at any point is always someone coveted in the NBA and Ellington’s professionalism and locker room presence are welcome as well.

While he is 34 years old, Ellington still has plenty to contribute at the NBA level and he will surely land somewhere if a return to the Lakers isn’t in the cards.