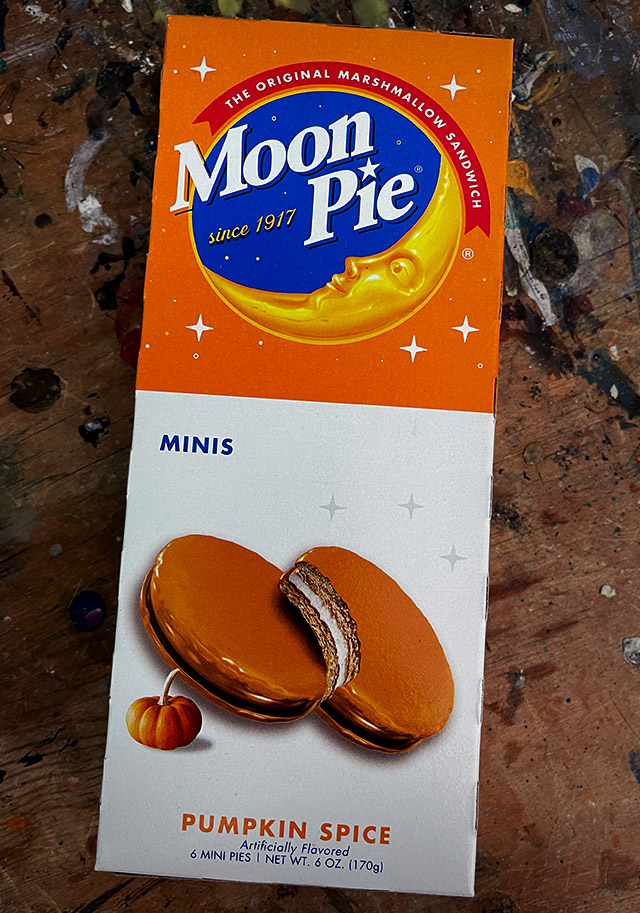 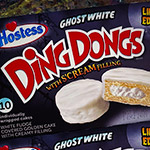 This is the third edition of 2021’s Best Halloween Junk Food, and I bet I can do another three before October 31st. As I’ve been saying, this is a crazy year for Halloween snacks — like to the point where I can barely keep up.

Compare this year to most years, when the well seemed dry by the second week of September. 2021 is one of the books! Enjoy it while you can, and worry about the extra pounds in 2022. 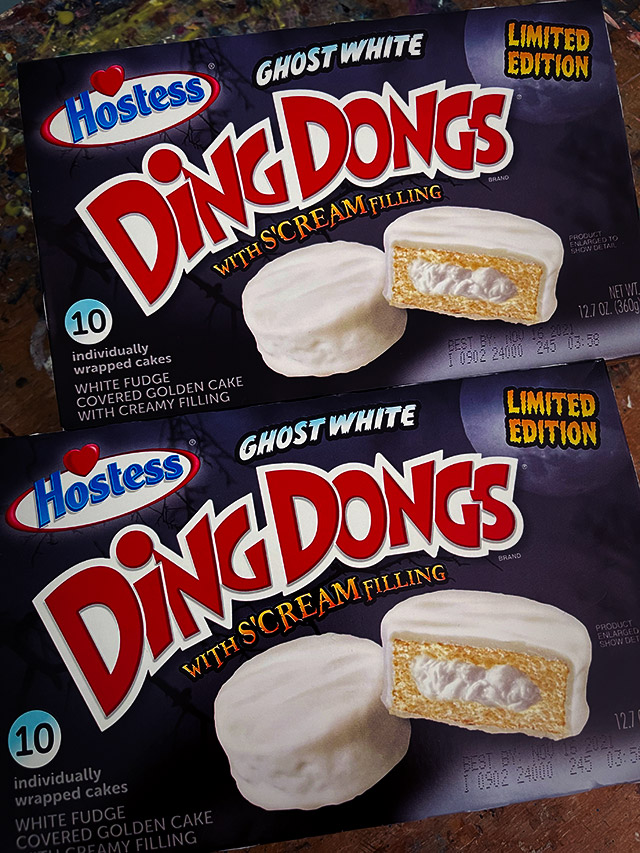 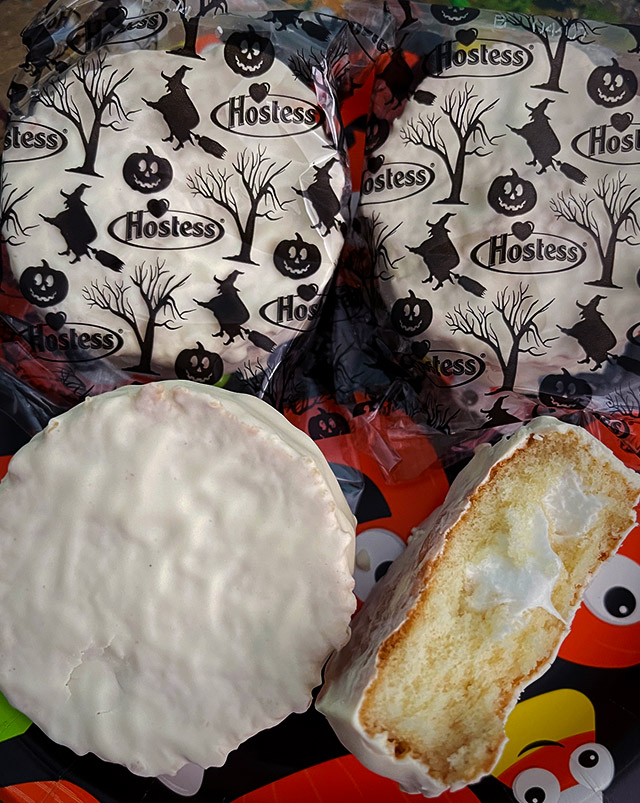 Recentism is surely shading my perspective, but frig it: This genuinely might be my favorite snack of the 2021 season. Ghost White Ding Dongs smother cream-filled cakes with white fudge, and they are DIVINE. They look like albino hockey pucks and smell like a birthday party.

It’s a big surprise from Hostess, which has spent the last several Halloweens only offering repeats. Nothing against ScaryCakes and Chocolate S’cream Twinkies, but if I’m gonna eat 42 grams of carbs in 4.2 seconds, I need it to be on something worth Instagramming.

GRADE: A+. They taste orgasmic — I don’t know how else to put it — and their cellophane wrappers are adorned with witches and dead trees. Add that gothic box and a solid euphemism for my junk, and yeah, this is an easy A+. 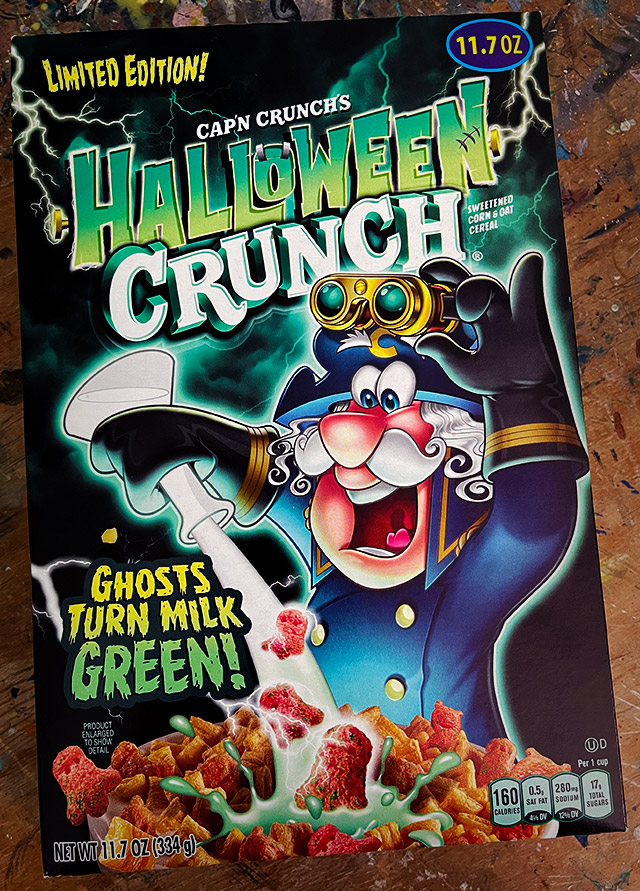 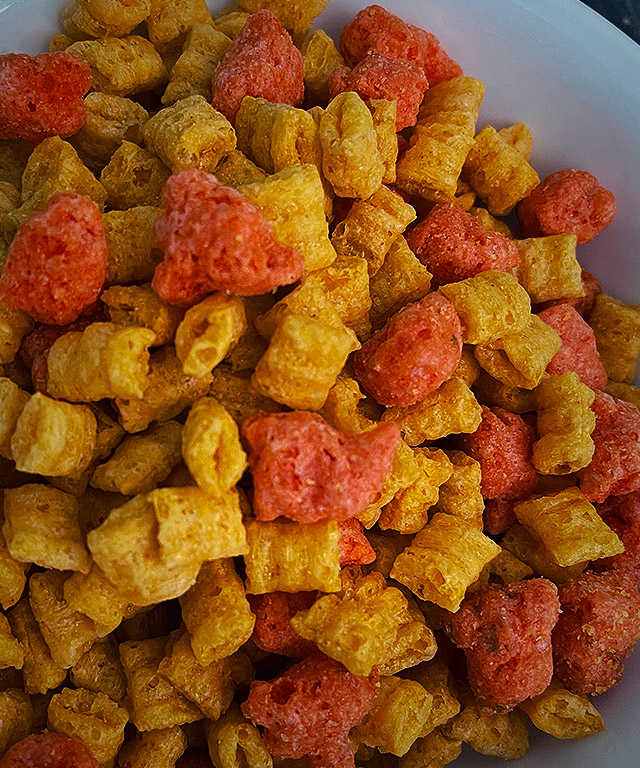 This is the same Halloween Crunch that’s been around for ages, but they FINALLY updated the box art! Me and my kind have been on Quaker’s ass for years about that. The previous design was great, but they’ve been using it since fourteen presidents ago.

If you’ve never had Halloween Crunch, it’s regular Cap’n Crunch with weird reddish ghosts mixed in. Those ghosts are stuffed with food coloring, which can turn milk a ghastly shade of green. I’d show you what it looks like, but I don’t allow milk in my home on account of milk being disgusting. Just picture mint-flavored Pepto-Bismol.

As for the new box design, we’ve got Cap’n Crunch dressed like a mad scientist, or at least half of a mad scientist. Can’t say that Mr. Crunch was all that committed to the costume. BRB, mailing him a lab coat.

GRADE: B, which may be generous. I’m happy that they revamped the box, but calling it a “redesign” is overstating things. It’s basically the same box they’ve been using for years, but with Cap’n Crunch now playing a scientist instead of a zombie. So like, it’s cool, but it could be cooler. 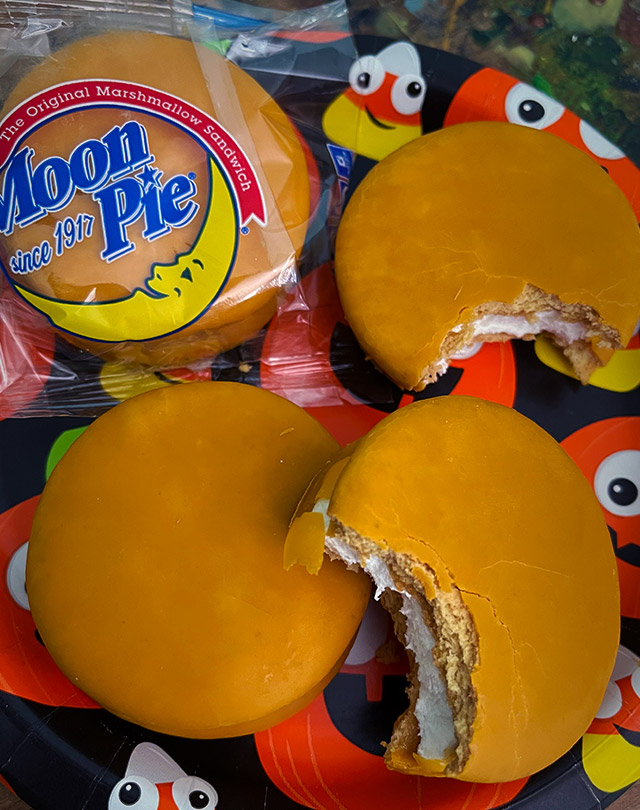 These aren’t new-for-2021, but they’re new-to-Matt. I found them at Walgreens while on an errand run that had nothing to do with Halloween. That’s one of the things I love most about this season. It follows you everywhere. There I was, hunting for Visine and paper plates, when my five-minute pharmacy run suddenly became a Halloween adventure.

These Pumpkin Spice Moon Pies are overachievers. I wasn’t expecting much from them, but there’s a lot to love. For one thing, the smell is pure “pumpkin pie” in a way that most special edition junk foods never pull off. They smell home-baked and they make me wanna call Grandma.

Then there’s the taste. Remember that these are called Moon PIES. The “bread” holding the gooey marshmallow in place is meant to taste like pie crust, which is a natural fit for pumpkin spice. It’s noticeable without being overpowering.

GRADE: B+. Note that these are only available in a “mini” size, which is closer to Mallomars than traditional Moon Pies. I think they might be better in that size, actually, as they’re small enough to sidestep the usual Moon Pie collapse when you get to the halfway point. 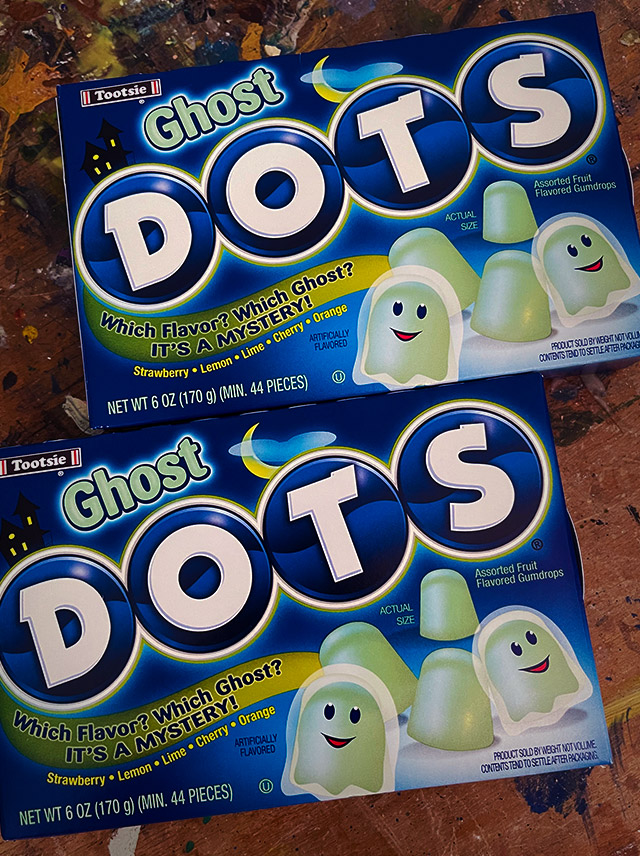 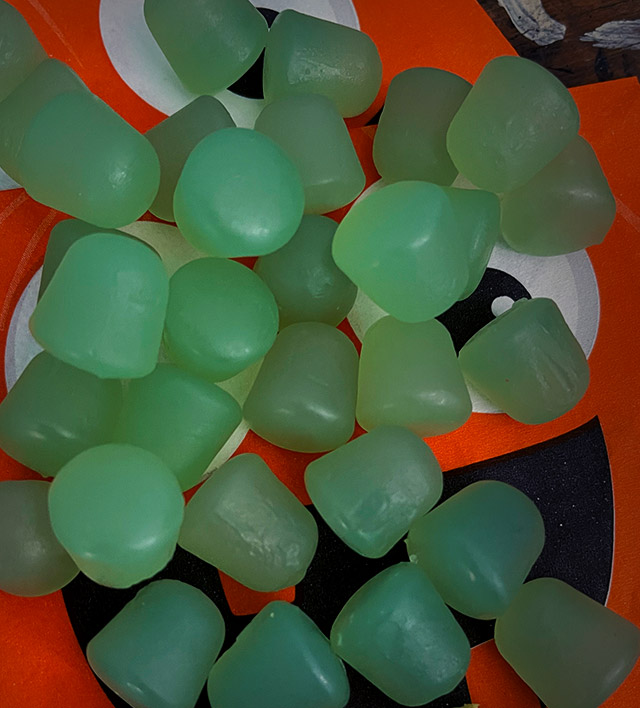 Ummm, this is HUGE news. Ghost Dots hit the scene back in 2007, and though Tootsie kept ‘em around for a while, they hadn’t been seen in years. Welcome back, you adorable monsters!

I love them as much as I did in ‘07, and for the same stupid reasons. Let’s start with those cute “mascot Dots” on the package, who so obviously deserve their own cartoon special. Then there are the actual candies, which don’t have the Bambi eyes but definitely have a “ghostly” look to them. It’s that perfectly milky midpoint between blue and green.

Every box contains the normal assortment of Dots flavors, but you won’t know which are which until you eat them. This of course assumes that you can look at the endearing ghosts on the box and then eat the real life versions. Personally, I cannot. I’ve already set them up in a dollhouse, where I feed them corn kernels twice a day.

GRADE: A. I’m surprised that Tootsie didn’t make a bigger deal out of Ghost Dots’ return. They just threw ’em out there with zero fanfare, but Ghost Dots were one of the MAJOR Halloween candies of the late aughts. Everyone, please go out and buy six boxes. Let’s keep these precious supernatural babies around.

What I appreciate most is that Keebler baked the pumpkin spice stuff right into the cookies, and didn’t leave the heavy lifting to the frosting. Which would’ve been the cheap way to do it. I knew Ernie was too proud to dick around like that.

While I assume Keebler’s normal Fudge Stripes are targeted at kids, the same can’t be said for this pumpkin spice version. Hell, even *I* feel too young for these cookies, and I’m 600. They beg to be served on ceramic plates, with coffee poured from a 1950s moka pot. Everyone at the table has white hair and a self-knitted sweater. Conversational topics range from mask mandates to potential rain.

GRADE: B. Ugh, I guess I should confess that these have been around for years, and I just now realized that I already reviewed them back in 2016. Oh well. Amazing that I have total recall on trivial shit from 1986, but I can’t remember which cookies I reviewed five years ago.

Thanks for reading! More editions of 2021’s Best Halloween Junk Food are on the way. If you missed the previous two, they’re here and here.