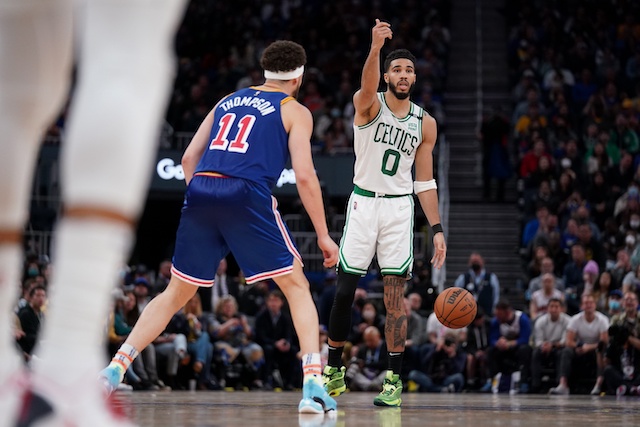 After a long season and drama-filled playoffs, the 2022 NBA Finals are finally set with Stephen Curry, Klay Thompson and Draymond Green leading the Golden State Warriors out of the Western Conference once again, taking on Jayson Tatum, Jaylen Brown and the Boston Celtics.

The NBA has officially announced the full schedule and TV info. for the series with the 2022 NBA Finals kicking off at the Chase Center in San Francisco on Thursday, June 2 at 6 p.m. PT. Game 2 following on Sunday, June 5 at 5 p.m. PT.

The series will then shift to Boston’s TD Garden with Games 3 and 4 taking place on Wednesday, June 8 and Friday, June 10, both starting at 6 p.m. PT.

Should the series need to continue beyond the first four games, Game 5 will be on Monday, June 13, back in Golden State with a potential Game 6 taking place back in Boston on Thursday, June 16, both starting at 6 p.m. PT. Should the series go the full seven games, the deciding contest will take place on Sunday, June 19 at the Chase Center at 5 p.m. PT.

All NBA Finals games will be broadcasted on ABC with alternate broadcasts on ESPN’s networks as well.

This is the second NBA Finals meeting between the Warriors and Celtics with Bill Russell, John Havlicek and Sam Jones leading the Boston to a five-game victory over Wilt Chamberlain and Nate Thurmond’s Warriors in 1964. The roles are reversed in this meeting as it is the Warriors who have been the most successful franchise in recent history while the Celtics are the inexperienced bunch making their Finals debut.

The Warriors made it through the Denver Nuggets, Memphis Grizzlies and Dallas Mavericks in their run through the West, getting back to the Finals for the first time since 2019, their sixth appearance overall in the last eight years.

Curry is leading the way averaging 25.9 points and 6.2 assists in the playoffs, but the key for the Warriors could be their role players as Jordan Poole, Andrew Wiggins and Kevon Looney have all had massive games throughout these playoffs.

The Celtics made it through a ton of adversity, surviving tense seven-game series with both the Milwaukee Bucks and Miami Heat to make their first NBA Finals appearance since 2010. Jayson Tatum has looked like one of the NBA’s future superstars, averaging 27 points, 6.7 rebounds, and 5.9 assists in the playoffs while Jaylen Brown has been very good as well, averaging 22.9 points and 6.8 rebounds.

In the Celtics’ Game 7 victory over the Heat, Tatum paid tribute to former Los Angeles Lakers legend Kobe
Bryant by wearing a purple armband with No. 24 on it. He also sent Bryant a text before the game saying that he’s got him, paying homage to his former mentor.