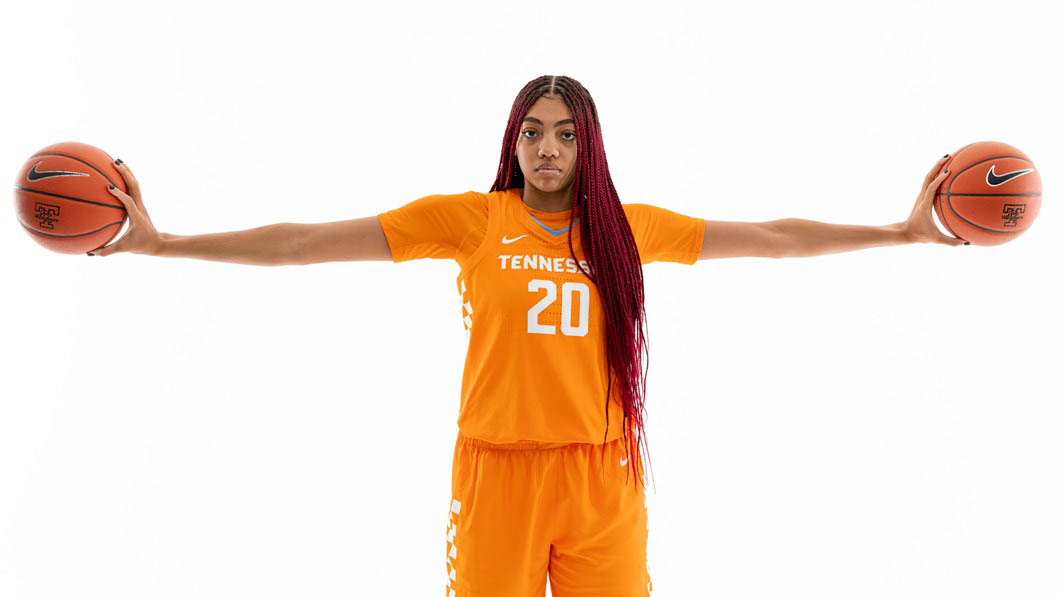 Thursday’s contest is the annual Live Pink, Bleed Orange game, which brings attention to the fight against breast cancer and provides recognition to the fighters and survivors of the disease.

UT is in the midst of a rigorous stretch of facing four ranked opponents in a span of 11 days, including three on the road. The Lady Vols played at No. 20/18 Kentucky on Thursday, drove home on icy roads, and played at No. 6/5 Texas A&M on Sunday. 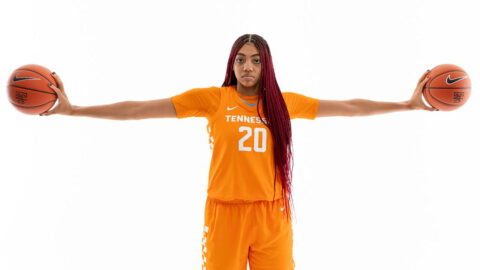 They were slated to play at Mississippi State on Tuesday night in a make-up game, but a Winter Storm Uri stranded the UT travel party in Houston following the game in College Station, and Starkville itself was shut down by winter precipitation from the same storm system.

Making the schedule even more challenging was the fact that UK and A&M had open dates prior to playing Tennessee. MSU would have had the same edge.

Tennessee enters Thursday’s contest on the heels of an 80-70 loss at No. 6/5 Texas A&M on Sunday afternoon. It was a one-point game with 2:11 to go, but the Aggies were able to draw fouls and close out the game by making their free throws. The Aggies hit 17 of 22 charity tries alone in the fourth quarter and 25 of 34 for the game.

Thursday night’s game will be televised by SEC Network with Courtney Lyle (PxP) and Carolyn Peck (Analyst) on the call.All of the games included in the ESPN package (ESPN, ESPN2, ESPNU) and the SEC Network will be available through WatchESPN, accessible online at WatchESPN.com, on smartphones and tablets via the WatchESPN app, and streamed on televisions through Amazon Fire TV, Apple TV, Chromecast, Roku, Xbox 360 or Xbox One to fans who receive their video subscription from an affiliated provider.

The game also will be carried on SiriusXM SEC Radio (Channel 374).

During the pandemic, it is understandable that many of those who are battling or have battled cancer are unable to attend this year’s Live Pink, Bleed Orange game. The Lady Vols want to continue to honor fighters, survivors and remember those who fought to the end.

This year, fans can nominate a survivor or fighter to receive their very own “Fighter CutOut” for the Lady Vols’ Live Pink, Bleed Orange game.

Fighter CutOuts will be placed courtside with recognition during a timeout. One lucky nominee also will win a game-worn, pink Lady Vols jersey. CutOuts will be available for socially distant pick-up at a later date.

The first Women’s NCAA Selection Committee Top 16 Reveal of 2020-21 was announced during ESPN’s Big Monday game on February 15th and Tennessee was listed as the No. 13 overall seed.

In that position, the Lady Vols would stand as one of four No. 4 seeds at this point in the season.

The Tennessee Lady Vols reached their highest position in Charlie Creme’s Bracketology, holding down a projected No. 4 seed for the 2021 NCAA Tournament as of February 8th, and are back at No. 4 as of February 16th.

UT was slotted in Region 1, with a projected first-round match-up vs. No. 13 Delaware and a potential second-round encounter with No. 5 Georgia Tech or No. 12 Bowling Green.

UConn is the No. 1 seed in that region, with Arizona and Baylor filling the two and three seeds.

About The Tennessee Lady Vols

Due to injuries and illness, the Lady Vols have sent three different starting lineups out to the jump circle in three of their last four games vs. Ole Miss, Florida, and Kentucky after having the same quintet in games five through 14.

The line-up of Key, Kushkituah, Davis, Burrell, and Horston returned for the Texas A&M game for that quintet’s 15th start together and pushed the one-loss Aggies to the brink before coming up short.

Junior guard Rae Burrell is the only Lady Vol to start in every game this season.

Against ranked foes, Burrell and Davis are putting up 19.2 ppg.

Burrell tallied 22 points vs. Kentucky last Thursday night, marking her team-best eighth time leading UT in scoring in 2020-21 and fifth game this season with 20 or more points. It was the eighth 20+ game of her career.

Davis had 25 vs. Texas A&M, marking her fourth 20+ scoring game of the season and 17th of her career, which ranks her seventh all-time at UT.

Sophomore Tamari Key needs one blocked shot to move into a tie with Isabelle Harrison in Tennessee’s career top 10 with 131 swats.

Kasiyahna Kushkituah has posted double-figure rebounding totals in two of her last three games, including 12 vs. Florida and 10 vs. Texas A&M.

Over her last three games, Jordan Horston has dished out 14 assists compared to only three turnovers.

For the season, Horston has 71 assists vs. 46 turnovers, with her ratio there also much improved.

No. 16/19 Tennessee pulled within one late in the fourth but couldn’t overcome a No. 6/5 Texas A&M team that shot 63 percent from the floor in the final quarter and also hit 17 of 22 free throws in that period, falling 80-70 in Reed Arena on Sunday afternoon.

Senior Rennia Davis led Tennessee (12-5, 6-3 SEC) with 25 points and added four rebounds, marking her fourth game this season and 17th of her career with 20 or more points. Sophomore Tamari Key turned in her second double-double of the season with 10 points and 10 rebounds. Junior Rae Burrell was also in double figures in points with 18 and had five rebounds, while Kasiyahna Kushkituah added 10 boards and eight points.

Destiny Pitts was the high scorer for Texas A&M (19-1, 10-1 SEC) with 18 points, and Jordan Nixon was close behind with 15. Aaliyah Wilson and Kayla Wells turned in 13 points apiece, and Ciera Johnson added 10.

Senior Rennia Davis moved her career points total to 1,642. She now ranks 15th all-time on the Lady Vols scoring list and is just one point shy of catching No. 14 Glory Johnson.

Sophomore Tamari Key carded her second double-double of the season with 10 points and 10 rebounds against Texas A&M. After opening the season with eight games in single digits, she has now scored in double figures in seven of the last nine games.

The Lady Vols outrebounded the Aggies 40-29 and turned those boards into 19 second-chance points. They have now outworked every opponent this season on the glass, with an overall margin of +17.5 rpg.

About the South Carolina Gamecocks

Since 2012, the series has been very streaky. UT won three straight, then USC took three in a row. After the Lady Vols claimed three consecutive wins, South Carolina made it three in a row. To continue the trend, it’s UT’s time to claim a “W.”

Kellie Harper has a 1-4 record vs. South Carolina as a head coach. She was 0-1 while at Western Carolina, and 1-2 while at NC State, beating the Gamecocks, 55-53, in Raleigh on December 4th, 2011. Round one as UT’s coach saw the decision go to Dawn Staley.

Harper was 5-0 vs. USC as a player, participating in the only overtime game between these schools in 1996.

After defeating South Carolina, the regular-season SEC champs at 14-2, the 13-3 Lady Vols went on to claim the 2014 SEC Tournament title in Duluth, GA.

Tennessee lost to South Carolina, 64-60, on February 2nd, 2012, in Knoxville, but rebounded to defeat USC in the 2012 SEC Tournament semifinals in Nashville, 74-58, en route to its 16th SEC postseason championship.

The Gamecocks (17-2, 12-0 SEC) haven’t lost in league play since falling to Arkansas in the SEC Tournament quarterfinals in March 2019.

Boston finished with her 10th double-double this season and 23rd of her career as South Carolina won its 12th straight over LSU. Zia Cooke added 13 points for the Gamecocks

A combined 18 second-half points from the sophomore duo of Rennia Davis and Evina Westbrook was not enough for the Lady Vols to complete a frantic comeback against No. 13-ranked South Carolina, which notched an 82-67 win at Thompson-Boling Arena on February 24th, 2019.

Tennessee (17-10, 6-8 SEC) cut the Gamecocks’ lead down to seven points twice in the second half despite a 16-point deficit at the half.

Next Up For Tennessee Women’s Basketball

After facing South Carolina, the Tennessee women’s basketball team hits the road for the third time in four games with a noon contest on Sunday at Georgia (SEC Network). It marks UT’s fourth straight ranked foe and a chance to avenge a one-point home loss to the Bulldogs on January 14th.