Davis added 12 rebounds to record the 36th double-double of her career. Junior Rae Burrell was also in double figures for Tennessee (13-5, 7-3 SEC) with 19 points, and sophomore Jordan Horston pitched in 12 points and five assists with no turnovers on the night. 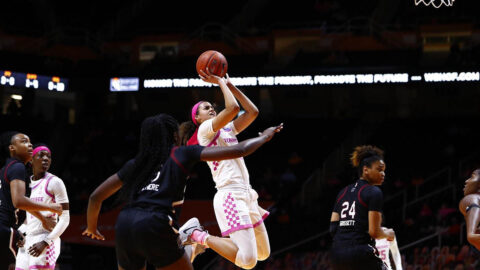 South Carolina (17-3, 12-1 SEC) was led by Aliyah Boston, who posted a double-double with 17 points and 16 rebounds. Zia Cooke and Destanni Henderson were the other top scorers, turning in 15 each.

Burrell gave the Lady Vols a spark early, coming up with the steal and the score less than 30 seconds into play and following it up with jumpers on the next two possessions to give UT a 6-2 lead two minutes in.

Brea Beal and Cooke combined to tie it up at six apiece by the 5:47 mark, but Burrell responded with a layup on the next trip down the floor to score her eighth-straight point and reclaim the lead for Tennessee. South Carolina again tied it up off a Victaria Saxton layup just before the media break, but Tamari Key scored her first points of the game off a pass inside by Horston to make the score 10-8 with 3:38 left in the first.

Henderson scored on back-to-back possessions to give USC its first lead of the game at 12-10 at the 1:51 mark. The teams traded buckets through the end of the quarter with the Gamecocks maintaining their two-point advantage into the final seconds until Horston hit a jumper at the buzzer to tie the score at 16-all.

South Carolina had its lead built back up to four a minute into the second quarter. Buckets by Kasiyahna Kushkituah and Key pulled UT back within two twice before Boston and Henderson combined for five points to put USC up 27-20 with 5:48 remaining in the half. Following the media break, South Carolina stretched its run to 15-1 to lead by 16, 37-21, by the 1:43 mark. Burrell and Kushkituah each added baskets to close out the half with four-straight points, cutting the halftime score to 37-25.

The second half started in much the same way as the first with Burrell scoring on a driving layup on UT’s first possession. Rennia Davis followed it up with a set of free throws on the next possession, cutting USC’s lead to single digits at 37-29. The Gamecocks rallied with a 7-0 run capped off by a Henderson trey before Kushkituah turned it around for Tennessee, hitting a layup to set off a 6-0 Lady Vol run and make the score 44-35 by the media break.

South Carolina stretched its lead to double digits off a Cooke jumper following the timeout, but Davis and Horston scored seven-straight for UT to narrow the gap to four with 2:48 left in the stanza. Boston converted on two free throws to move the score to 48-42, but a fast-break layup by Destiny Salary and an old-fashioned three-point play by Jordan Walker on the next possession had the Lady Vols within one with just over two minutes left in the third.

A minute later UT claimed its first lead of the second half, going up 51-50 off a driving layup by Horston. Tennessee held on to a one-point lead until the final seconds when a jumper by Boston sent the game into the final period with USC up, 54-53.

South Carolina pulled away by four in the opening minutes of the fourth, but Burrell hit a clutch trey with 7:25 left in the game to pull UT back within one, and two minutes later Davis added a three of her own to tie it up at 62-all. Walker gave UT the lead on a layup on the next possession, and Horston and Key each added a free throw to extend the lead to four with just over four minutes to play.

Davis increased UT’s lead to six before USC whittled it back down to three from the free-throw line. Horston hit a layup at the 1:38 mark, and Davis came up with a rebound on the other end and drew the foul, hitting both free throws to put the game out of reach at 72-65 with under a minute to play.  With the Gamecocks forced to foul, UT was able to capitalize on free throws, taking a 75-67 victory.

“Re” Rewriting Record Books: With her 24 points against South Carolina, senior Rennia Davis passed Glory Johnson on the all-time scoring list, ranking 14th with 1,666 points. Her 12 rebounds also moved her past Dana Johnson to rank 15th on the all-time rebounding list with 885. Additionally, she recorded the 36th double-double of her career, tying with Glory Johnson for fourth all-time on UT’s career double-doubles list.

TK Moving On Up: Tamari Key blocked five shots against South Carolina, moving her career total to 135 and landing her on UT’s career blocks list as only a sophomore. She surpassed Isabelle Harrison (131) to tie Teresa Geter at ninth all-time among Lady Vols.

Horston Dishing: Sophomore Jordan Horston doled out five assists against USC without turning the ball over even once.  Over the last four games she has dished out 19 assists while committing just three turnovers, all of which came against Texas A&M. Her current career average of 4.5 apg. would rank fourth all-time among UT Lady Vols.

Big-Time Wins: With the win over No. 2/3 South Carolina, the Lady Vols have beaten four ranked teams, its highest number of wins over ranked opponents since the 2017-18 season. The victory over the No. 2 Gamecocks also represented the highest-ranked foe a Kellie Harper-coached squad has defeated. While at NC State her Wolfpack took down No. 5 Duke on March 2nd, 2012, 75-73.

Next Up For Tennessee Men’s Basketball

The Tennessee Lady Vols basketball team will hit the road again, traveling to No. 22/23 Georgia for a noon matchup Sunday on SEC Network.