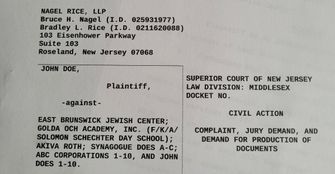 Nearly 25 years after his bar mitzvah tutor pleaded guilty to sexual misconduct, a 40-year-old New Jersey native has sued the former tutor as well as the synagogue and day school that employed him.

The tutor, Akiva Roth, pleaded guilty in 1997 to four counts of lewdness, and lost his jobs at the East Brunswick Jewish Center, the former Solomon Schechter School of Essex and Union counties and Camp Ramah in the Berkshires. But the plaintiff in the lawsuit and two other former students of Roth who were interviewed over the past month contend that the three institutions failed to properly inform their communities of the situation, allowing Roth to continue teaching in other Jewish organizations for years.

The three men, two of whom were speaking publicly about their experiences for the first time, said Roth’s behavior — which included masturbating in front of middle-school boys and near-incessant talk of pornography and penises — was an open secret at the synagogue, school and camp in the mid 1990s. He was sentenced to 10 years probation for his sexual behavior in front of four boys in one of their homes. But the men said that the criminal investigation at the time was too narrow, and expressed outrage that the Conservative movement has yet to be held fully accountable for its handling of the situation.

“I’ve frankly been kind of disgusted and my parents have been disgusted for years that the investigation never went past the four kids,” said Scott Schonfeld, a former Ramah camper and student at East Brunswick and Schechter — now known as Golda Och Academy — who alleges that Roth was sexually inappropriate towards him.

Schonfeld, now 40 and living in California, said he had never been contacted about Roth’s lewd behavior by detectives or administrators at the camp, synagogue or school. “You’re literally the first person ever to ask me about it,” he recently told the Forward.

Roth, meanwhile, worked at the Jewish Theological Seminary, Drew University’s Hillel and Yeshiva University before the Forward reported on the misconduct in 2013.

The lawsuit and other accusations come as the Conservative movement, like other parts of the Jewish community, are undergoing a reckoning over past handling of sexual and other misconduct.

Four years after the Harvey Weinstein scandal launched the #MeToo movement, the Rabbinical Assembly last month made public its list of expelled or suspended rabbis for the first time. The Assembly announced in April a plan to revise its code of conduct, while the Reform movement’s seminary, rabbinical organization and synagogue network have all hired separate law firms to independently investigate allegations of harassment and the institutions’ policies to prevent it.

The fresh allegations against Roth join a steady trickle of recent stories about sexual misconduct with Jewish youth. Rabbi Jordan Soffer, now head of a Jewish day school in Sharon, Mass., in August alleged that an employee of United Synagogue Youth sexually abused him at a convention when Soffer was 15, but continued to work in the Conservative movement for years. Two victims of the same USY staffer filed lawsuits against the youth group this summer, and the CEO of United Synagogue of Conservative Judaism quickly announced it would implement new safety procedures and investigate how the organization handles complaints.

After being informed of the lawsuit and other material about Roth gathered by the Forward, Camp Ramah said it had hired the law firm Jackson Lewis to conduct an investigation.

“While these allegations relate to conduct 25 years ago, we take this new information very seriously and are committed to discovering the truth of what may have occurred,” Camp Ramah said in a statement. “We owe it to the individuals directly involved and to our community.”

The camp also said its current employees are trained to respect boundaries and recognize predatory behavior, and that its child-safety policies were recently audited — at Ramah’s request — by Sacred Spaces, a Jewish abuse-prevention organization.

“Then, as now, we stand with all victims of sexual misconduct and recognize the courage it takes for them to come forward,” the statement said.

Roth, who was fired by Yeshiva University after the Forward’s 2013 articles, says on his LinkedIn profile that he now works as a Hebrew translator. He did not respond to requests for comment made by phone and through Facebook, where he has posted mini-sermons, including one in which he describes Moses as “canceled.”

“He doesn’t get to see the promised land,” Roth noted. “So in one way he was canceled. In another way it teaches an important lesson. In cancel culture, there has to be a happy medium between canceling the entirety of what a person has done just based on one foible or one negative quality.”

‘It wasn’t hidden at all’

Akiva Roth grew up in the Conservative movement — his father, Rabbi Joel Roth, was an influential leader in the Rabbinical Assembly and a professor of Jewish law at the Jewish Theological Seminary. Roth majored in Jewish studies and political science at Rutgers University and graduated in 1994, according to his LinkedIn profile.

So when the East Brunswick Jewish Center’s population swelled in the early 1990s, the younger Roth was an easy hire to help Cantor Jonas Rosen, a Holocaust survivor and beloved pillar of the community, train the bnai mitzvah candidates. Roth, who is now about 50, also taught at what was then Schechter; and worked at Camp Ramah in the Berkshires until the criminal investigation.

“Everyone knew Akiva was just a pervert,” Cohen said. “That was just known among the boys. That’s why it was so bizarre. It wasn’t hidden at all.”

“I saw him ejaculate,” the plaintiff continued. “I was 12 years old.”

The lawsuit, filed in New Jersey’s Middlesex County Superior Court last week, accuses Schechter — now Golda Och Academy — and the East Brunswick Jewish Center of negligence for failing to oversee Roth and protect their young students. The plaintiff has also sued Roth personally, alleging sexual abuse and intentional infliction of emotional distress. The suit seeks damages and attorney’s fees but does not specify how much.

“I just thought he was one sick bastard,” the plaintiff said. “Unfortunately it took me half a lifetime to realize that that’s sex abuse.”

‘I never talked about it’

In the summer of 1996, Cohen said, one of his friends confided in his brother about what Roth was doing. The brother told their parents, and from there things moved quickly. Cohen recalled being interviewed by an investigator with the Middlesex County Prosecutor’s Office, and then hearing that Roth had been arrested and lost his job at the synagogue, school and camp. But all three institutions chose to handle the problem quietly.

Schonfeld and the plaintiff each said that Ramah, Schechter and the East Brunswick Jewish Center all failed to inform parents of Roth’s arrest or the reason his employment with them ended. Schonfeld attended all three institutions, but said his parents only learned of Roth’s misconduct years later from the father of one of the boys in the 1996 criminal case.

Rabbi Paul Resnick, Ramah’s executive director in 1996, said he contacted child protective services as soon as he heard about the allegations, which focused on Roth’s conduct at a private home. Ramah did not, at the time, investigate whether any misconduct took place at camp, Resnick said.

“Because these allegations were not yet fully substantiated, we did not believe it was appropriate to share the news with our entire camp community,” Resnick emailed in response to the Forward’s questions. “Importantly, I did not want an internal investigation to interfere with the state investigation.”

Schonfeld said in the interview that as a student at Schechter, he occasionally carpooled with the son of East Brunswick Jewish Center’s Rabbi Chaim Rogoff. After the first day of school in 1996, Schonfeld recalled, when they arrived at the Rogoff’s home, Roth was there.

He said the rabbi and the tutor told him that Roth was no longer working at Schechter because of inappropriate behavior involving other boys. But instead of offering support or asking whether he had any problems with Roth, Schonfeld said, “I do distinctly remember that Chaim Rogoff swore me to secrecy.”

Rogoff, who left the East Brunswick Jewish Center more than a decade ago, did not respond to a request for comment.

Charlotte Abramson, the principal of Schechter’s middle school at the time, wrote in an email that she could not recall details about how the school handled the case. Roth never worked for the school again after his arrest, she said.

“I have no knowledge of that nor any recollection of what the school’s official response may have been at the time,” Abramson said. “I do know that a major priority and obligation of the educational institution was — and is — to assure and protect the safety and welfare of the students and the institution.”

The current leadership of what is now Golda Och Academy, a non-denominational day school in West Orange, N.J., said in a statement that there is no record of communication with parents about Roth’s case, and that the school would notify the community and reach out to support victims if similar allegations arose today.

“We feel deep compassion for the people victimized by Mr. Roth,” the statement said. “Any violation of the teacher-student relationship is unacceptable. That Mr. Roth broke the trust of students and their parents while preparing them to become responsible members of the Jewish community is especially reprehensible.”

Golda Och, like Ramah, said it now trains staff to recognize and report signs of sexual abuse. “We are committed to creating a safe and supportive environment for our entire community,” the school said in the statement. “Our policy includes following all state-mandated background checks, reference checking, and regular training for faculty and staff on preventing, recognizing, and reporting signs of sexual abuse.”

The East Brunswick Jewish Center said it would not comment due to the pending litigation.

‘The effect on me has been tremendous’

Schonfeld and the man now suing under the name John Doe both said separately that they were never contacted by law enforcement during or after the investigation that led to Roth’s 1996 arrest. The Middlesex County Prosecutor’s Office said it could not locate any records of Roth’s criminal case and declined to comment further. Middlesex County Superior Court also did not find any records, and did not respond to questions about whether the case was sealed.

The plaintiff in the suit said he still struggles with the emotional impact of Roth’s actions: “The effect on me has been tremendous.”

He said it took him a long time to realize he needed to take action to make clear that Roth’s offenses went beyond what he pleaded guilty to in 1997 — and to hold Roth’s former employers accountable. When the Forward reported in 2013 that Yeshiva University had hired Roth as a lecturer despite his criminal record of abusing boys, that, he said, helped to motivate him.

“This was a long-coming development for me,” the plaintiff said. “I think it probably really began in earnest in 2013, when I realized that he had abused so many children and that the truth had not been told.

“At that point I knew I was going to do it, and it was a matter of developing the personal courage and fortitude to be able to get to this moment.”