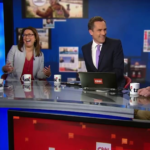 CNN Political Analysts Explain First Is the Worst, Second Is the Best, Third Is the One With the Hairy Chest

NEW YORK — Political analysts sitting around the CNN roundtable explained to viewers today after the decisive New Hampshire primary that first is the worst, second is the best, and third is one with the hairy chest.

“The Sanders camp is certainly happy with last night’s outcome but conventional wisdom tells us time and time again that ‘first’ is the ‘worst.’ You don’t want to be in first,” Max Foster explained to the other CNN analysts. “In fact, second is generally considered the best, which is where former Mayor Pete Buttigieg ended up. Amy Klobuchar, however, is the one with the hairy chest — and only time will tell how that will work out for her in Nevada and South Carolina. Hairy chests are often what you want for a caucus and, as I said before, it’s certainly better than first.”

Despite Acosta’s convincing arguments, not everyone at the CNN roundtable agreed.

“Obviously Sanders is in the worst spot and Buttigieg is in the best spot, coming out in first place and second place in New Hampshire respectively. That much I obviously agree with. Klobuchar is in a messier position, however,” responded Ayesha Hazarika. “Some say that third is one with the hairy chest but as we all learned in 2016, there is reason for doubt! At this point, we cannot say for certain that third is not the one with the wedding dress or even the treasure chest.”

“That treasure chest could be monumental to Klobuchar’s momentum on Super Tuesday and we’re just going to have to wait until the polls come out to see if that’s what she has.”

CNN then revealed that Elizabeth Warren, who placed fourth in the New Hampshire primary, was seen brandishing a golden gun that she had pointed at Senator Sanders. As of press time, former Vice President Joe Biden has made no statement confirmed nor denying that he has a “monkey bum.”

Check out the newest episode of our podcast, The Ace Watkins Presidential Hour:

The post CNN Political Analysts Explain First Is the Worst, Second Is the Best, Third Is the One With the Hairy Chest appeared first on The Hard Times.

CNN Political Analysts Explain First Is the Worst, Second Is the Best, Third Is the One With the Hairy Chest