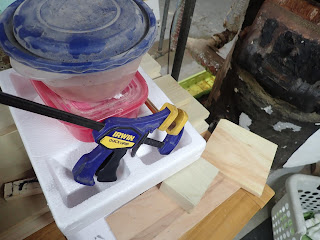 Had a bit of slow start in the shop today. I got up at oh dark thirty five and I didn't get to the shop until 10-ish. I spent a lot of time trying this and that to see if there was something on my end as to why my blog isn't getting posted on the Unplugged Site. I'm an Ok guy posted along with the Tiny Workshop and both of them are on the Unplugged site but as of this writing, those two and myself haven't made  it yet.

I balanced my checkbook and then watched Friday Live and a few other You Tube videos. After this I finally wandered down to the shop to get to work.

I did this to keep the beam from moving as I drove the two pins home that I punched out.

I put the short mortise pin in the marking gauge pin hole. The pin that was in there was a bit bigger than the mortise pin.

I got the new pin in and I fussed with it a bit getting it to be the same height as its sibling. Once I was satisfied with that I sharpened it with the file.

I made several lines of varying widths/distances from the edges and got consistent double lines. I didn't have to tip the gauge one way or other to get both to mark the same on the board.

I like having the thumbscrew pointing up as I use the gauge. That leaves the two outsides faces free to be gripped with my fingers. I can't position the head of this gauge to do that. The beam is ovaled and it doesn't match the head oval to put the screw where I want it. I'm stuck using it with the thumbscrew taking one of my favored finger places.

I got lucky with this gauge that I didn't have to put a new pin in it. The pins used in this gauge looked like they were all brads and I have some small brads that I could have used. If I didn't have them McMaster-Carr sells rods in several different types of steel. Some have a smallest diameter of 1/16" but other metal types are sold in diameters below a 1/16".

The miller dowels are too short for this and I could make my own but it won't work. There isn't much meat on the exit side. I wanted to come this way because it is the inside of the leg and the dowels would have been less noticeable here.


This went off with out any hiccups. I used hide glue and I glued the bottom and the top of each of the slats.

Gluing the legs and the rails together was not hiccup free. I had set the legs by matching the labels on them to the rails so they were in the right positions. I glued the left one in ok but the right one I rotated 90° and I didn't notice it until I was going to check for square. When I did that I went into panic mode screaming and swearing up a storm. It is a good thing I used hide glue because even with that I didn't have an easy time getting the right leg off.

I whacked this band molding in my haste to knock the leg off the rails. I don't recall whacking the bottom molding though.

I wasn't thinking when I whacked the leg with the mallet. I saw the second mark I made and grabbed a scrap of wood and used that to whack the mallet against. I survived the ordeal and my wife said I have to tell her the next time I do a glue up so she can leave the house.

I can't leave this as it is. There is too much damage to use putty to fill it in.

This molding is nailed and glued. It won't be as easy to remove and replace as the band molding was. This one I will try to use putty and glue to fix.

The chisel wasn't super sharp but I wanted to try it chiseling out this part of the band molding.

The first one I sawed out was too short. The second one fit.

The firmer worked as good as a bevel edge chisel but there was a nuance difference to it. I used the 5/8" one I sharpened to knock down the high ends. After that I sanded them flush with 80 grit sandpaper.

I glued the dowels in after the back ass'y had been in the clamps for about 4 hours.

I've been using this to fill nail holes for a while. Joint compound sticks to anything, fills without shrinking, and it won't fall out. I will flush the nail holes with a damp sponge. That will clean up any stray compound and smooth out the filled nail hole.

If I get ambitious I will go back to the shop before I hit the rack and do the second coat.

I want to study the plans before I start making it. I can never understand the tolerances for measuring that these plans have. There is one measurement for 15/32". The hole an awl makes is bigger than a 32nd. I will do the best I can and use my knife to mark the holes.

trivia corner
Did you know that the World's first World Fair was held at the Crystal Palace in Hyde Park, London, United Kingdom, in 1851?
Source: accidentalwoodworker