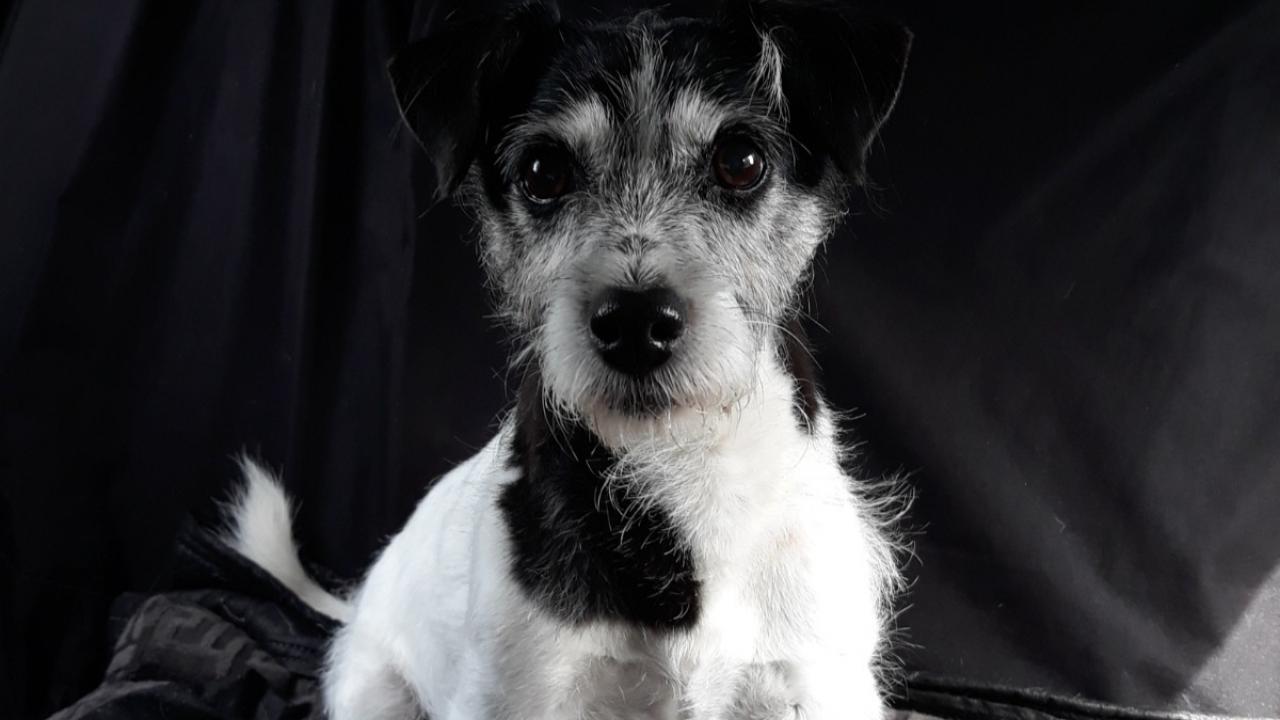 Whoudini, a 14-year-old male Jack Russell terrier, has lived quite the life. With his owner Maia Bailey since he was 4 weeks old, the little escape artist was aptly named because he constantly found a way to separate himself from the rest of the litter.

“Even though he was the runt, he was strong and fiercely independent,” said Bailey. “It was love at first sight, and we’ve been inseparable ever since.”

Whoudini was born on a canal barge in England, and lived with Bailey on hers for two years before embarking on other great adventures around the world. The two eventually made their way back stateside and settled in Northern California, where they enjoy regular walks, beach outings, and chasing feathered friends.

In 2019, Whoudini developed a mass in his left shoulder area that was confirmed to be a soft tissue sarcoma. Bailey brought him to see the specialists in the Oncology, Diagnostic Imaging, and Soft Tissue Surgery Services at the UC Davis veterinary hospital.

Due to the type of cancer and the positioning of the tumor, the most aggressive treatment is amputation of the limb and follow-up therapy, such as chemotherapy. However, Whoudini has arthritis in his right front limb. Amputating his left limb would cause too much stress on the remaining limb. Keeping the arthritis in mind, a less aggressive option of radiation was pursued.

The goals of palliative radiation are either to help reduce discomfort related to a tumor or to reduce the size of a tumor for a short period of time. Radiation offers an option to patients whose tumors are too difficult to remove with surgery, are a type with a very poor prognosis, or have started to metastasize. Most importantly, though, radiation therapy can delay the tumor becoming more uncomfortable or larger for a short period of time while maintaining a good quality of life for the patient.

“Whoudini is doing so much better,” said Bailey. “While he is not cancer free, the amount of shrinkage in his tumor following the radiation treatments has been tremendous. He takes medication for his arthritis, and the way he drags me around the block for his walks indicates he is not in pain.”

Bailey qualified for financial assistance through a generous grant from the Blue Buffalo Foundation’s support of the Petco Foundation pet cancer treatment program at the UC Davis veterinary hospital. The grant helps support treatments for domestic companion animals suffering from cancer. The project is designed to support pet parents of modest means or pet parents whose pets provide a service to others.

“I feel pretty certain that Whoudini would not be alive today without the intervention by the dedicated UC Davis care team and the generosity of the Petco and Blue Buffalo Foundations,” Bailey said. “His care team extended from the front desk, through to all of the vet techs and specialists. UC Davis is doing amazing work, and Petco and Blue Buffalo are enabling an extended quality of life. I cannot thank them enough.”