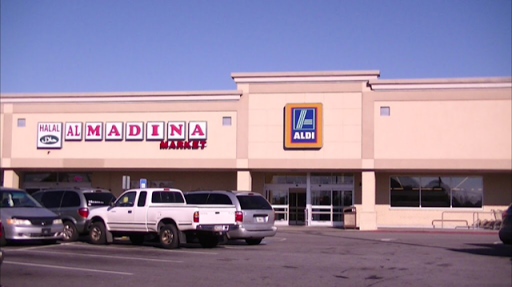 [UPDATE] Aldi Has Closed in Norcross, its First Closure in Georgia

Aldi, the German grocery which has been expanding its presence in metro Atlanta, recently closed a store in Norcross.  Located at 5345 Jimmy Carter Boulevard, the store was inline rather than an endcap or freestanding store as the grocer prefers.  The Aldi was also located in an older center - Gwinnett Horizons shopping center - that appears not to have seen much in the way of improvements in many years.

Property owner Mimms Enterprises is already marketing the nearly 17,000 square foot space in the center which is also home to Family Dollar and Aaron Rents, among other tenants.
Multiple attempts by email and phone to get an official comment on the closure from Aldi's PR firm of record, Weber Shandwick, were fruitless, despite Weber Shandwick's promise to respond.
Real estate sources tell ToNeTo Atlanta that the closure was likely a case of diminishing returns where the grocer did not find it to be financially wise to continue to invest in a store they found to have limited upside.
A local real estate broker familiar with the grocer's presence in Georgia indicated that the Norcross closure is Aldi's first store to ever close in the state.  Aldi first entered Georgia around 2004 according to online resources.
Among the stores that Aldi has opened in recent years is one on Peachtree Parkway, also in Norcross, about five miles away from the now shuttered store.
Currently, Aldi operates more than 1,600 stores nationwide - with more than 50 in metro Atlanta - with plans to have 2,500 by 2022.
Locally, Aldi has taken excess space from retailers like Best Buy while assuming control of two former Sports Authority stores where they occupy portions of the former sporting goods stores and plan to sub-lease the balance.  The grocer also announced plans last year to open markets within Kohl's as the retailer looks to offload excess space in an effort to "right size" their store fleet.  Of the ten stores to be located within Kohl's, none were in Georgia but the retailer is marketing other excess space within stores in the state.
Aldi, which invites customers to "shop different," carries primarily private label products which keeps prices low.  The grocer's pricing has attracted a niche following amongst cost-conscious shoppers looking for ways to stretch their budget further.
While the grocery market nationally is competitive, some see metro Atlanta as one of the most competitive markets, with players like Kroger, Publix and Walmart well entrenched, and new players like Lidl, Sprouts Farmers Market, and others expanding in the area.
For its part, Aldi has poured millions of dollars into renovating and expanding its stores while at the same time adding more organic produce and other healthy offerings in a bid to broaden its appeal.
Are you surprised that Aldi closed their Norcross store?  Where do you do most of your grocery shopping?  What would you like to see open in place of the former Aldi in Norcross?
Please share your thoughts below
Source: tonetoatl.com

[UPDATE] Aldi Has Closed in Norcross, its First Closure in Georgia