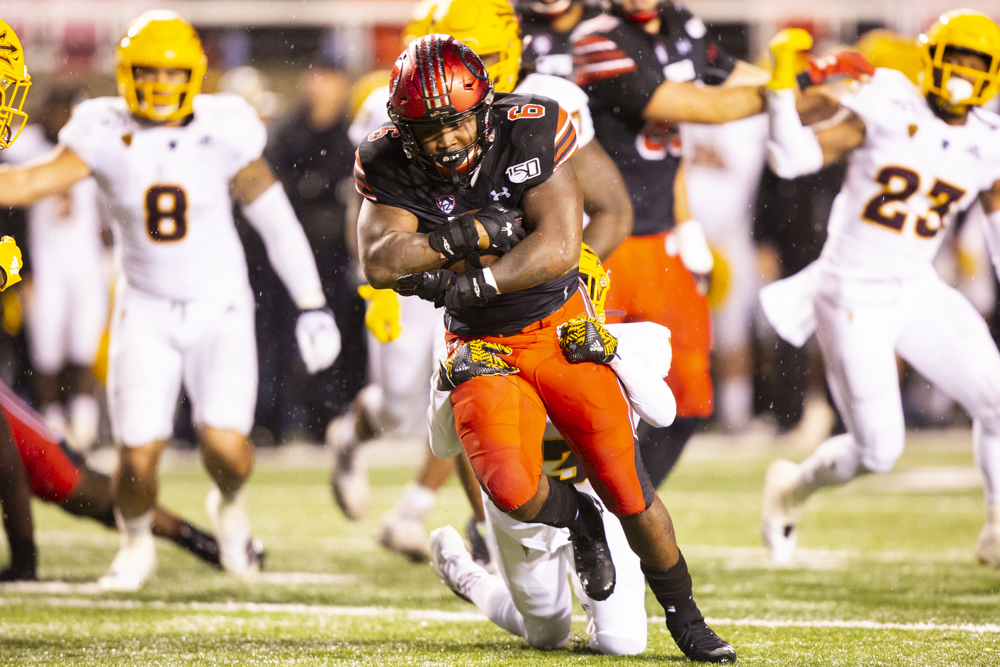 Breaking Down the Utah Football Roster

After one of the most successful seasons in school history, the University of Utah football team will be filled with many new faces that look to keep the program’s long history alive, whenever play is set to resume.

The biggest question mark surrounding the Utah offense this season is who will be under center for the Utes. The team has two very strong options in Cam Rising and Jake Bentley. While Rising was on the team last season, he was not able to play due to transfer regulations. Prior to spring ball being cancelled, he was facing off against graduate transfer Jake Bentley. Bentley who played most of his collegiate career at South Carolina will spend his final year here at Utah. Bentley had a 10-7 record as a starter versus other members of the SEC. He also ranks second in South Carolina history in career completion percentage, completing .625 of his passes. In addition, Bentley ranks third in career pass completions with .626 and passing touchdowns with 55. His 7,527 passing yards makes him fourth in school history. He is also fifth in South Carolina history in total offense with 7,670 total yards.

The Utes look to be more set in the backfield with both Devin Brumfield and Jordan Willmore returning to the team. While Brumfield took the majority of the reps that were not going to then-senior star, Zack Moss, Willmore showed what the future of the running back position will look like for the Utes. Utah may also look for TJ Green to contribute in the backfield as well.

The wide receiving core won’t look much different from last year’s squad. While the team lost Demari Simpkins, the team will get Britain Covey back after he redshirted last season following an ACL tear in the 2018 season. Jaylen Dixon and Samson Nacua will also be looking to build off the impressive seasons they had last year. But Bryan Thompson comes back to the team as the leading wide receiver after the departure of Simpkins and Derrick Vickers. Thompson accounted for 461 yards last season as well as three touchdowns. Also, look for Solomon Enis to make a big impact the next time the team takes the field.

But the best player catching passes is not even a part of the wide receiver squad. Tight end Brant Kuithe scored six touchdowns while racking up 602 yards in his breakout season and will no doubt be a favorable option on offense. Cole Fotheringham will also be an option for whoever is behind center as he racked up 156 yards and a touchdown in his sophomore season.

The Utah offensive line will continue to grow, only having to replace two players who saw time last season. Nick Ford, Orlando Umana and Braeden Daniels will most likely anchor down the line. Simi Moala, Bamidele Olaseni, Keaton Bills, Johnny Maea and Paul Maile will most likely make the rotation on the line.

After the departure of the mayor of Sack Lake City, Bradlee Anae, the race is on to find his replacement. This season looks to be a reload for the line, after three of the starters took their talents to the NFL. But fans shouldn’t worry about the defensive line, there are plenty of faces that will look to step up. Mika Tafua and Hauati Pututau are two of the returning members of the stacked line. With the pair on the ends, the middle of the line could be filled with many players. Pita Tonga and Mufi Hill-Hunt could seem like the most likely case but incoming freshmen Van Fillinger and Xavier Carlton might be able to wiggle their way into the lineups. Also, look for Maxs Tupai to possibly see some time at the defensive end spot.

While Devin Lloyd has one of the linebacker spots on lock, who will be lining up alongside him is more of a question mark. While Andrew Mata’afa or Nephi Sewell would be good choices for the team, the pair of junior college transfer Jeremy Mercier or incoming freshman Sione Fotu also could make a run for the spot across from Lloyd.

Utah will also be tasked with replacing almost everyone in their secondary with the exception of RJ Hubert. Whether Hubert will be ready to go by season’s start is still unknown, but if he is good to go after his ACL surgery, that will be a huge plus for the Utes. Freshman Nate Ritchie could be one of two true freshmen who could greatly impact the Utah secondary. Aaron Lowe could also be a suitable player to take the plunge into the secondary. Highly touted true freshman cornerback Clark Phillips looks to be a great replacement on the strong side corner, a position that Jaylon Johnson held for three years before heading off to the NFL. JaTravis Broughton, Malone Mataele and Bronson Boyd would all be good options as either a nickleback or weak side corner for the Utes.

The Utah specialists will continue to grow from last season as Jadon Redding will kick the field goals and Ben Lennon will continue punting for the team.

But whether the season comes in September like planned or if it is pushed because of COVID-19, the future looks bright for a young Utah football team.

The post Breaking Down the Utah Football Roster appeared first on The Daily Utah Chronicle.

Breaking Down the Utah Football Roster